‘MTSU On the Record’ fosters f.. 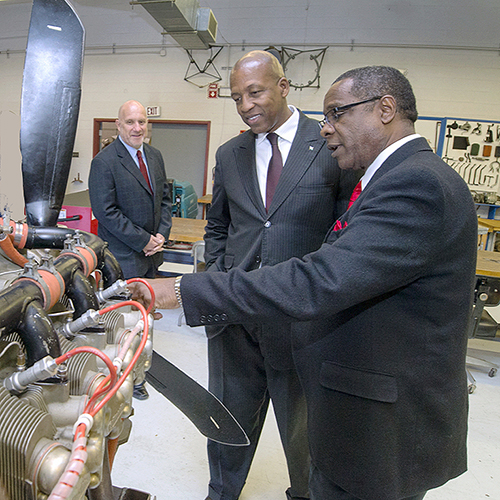 The chairman and secretary of The College of The Bahamas Council, the governing board of that nation’s public institution of higher education, visited MTSU this week to collect ideas and insights as the college prepares to become The University of The Bahamas.

MTSU President Sidney A. McPhee, right, shows Alfred Sears, chairman of The College of the Bahamas Council, an airplane engine during a recent tour for Bahamian dignitaries of MTSU’s aerospace maintenance training facilities at Murfreesboro Airport. Michael Stevenson, secretary of the council, is shown at center and Earl McPhee is at far left. (MTSU photos by J. Intintoli)

Chairman Alfred Sears, a former education minister for The Commonwealth of The Bahamas, and Secretary Michael Stevenson arrived Wednesday and spent Thursday and Friday touring the MTSU campus and meeting with university executives.

Campus stops included visits with the deans and faculty of the Jennings A. Jones College of Business, the College of Mass Communication and the College of Basic and Applied Sciences. Their CBAS stop included the departments of agribusiness and agriscience as well as aerospace.

After more than 35 years serving the country as a two-year and then as a four-year degree-granting college, The College of The Bahamas will soon become a university with a focus on supporting and driving national development through education, research, innovation and service.

Sears said the delegation focused on the MTSU programs that it hopes to emulate when it reaches university status: agriculture, small-business development, recording industry and business entrepreneurship.

Those fields can help The Bahamas diversify its economy and support greater sustainability, Sears said.

The chairman said the delegation was most impressed with MTSU’s “close relationship between industry and the academy,” as well as its shared governance with faculty, its priority on experiential student learning and the cohesion and shared vision on student success.

“We have a long way to go, but based on what we’ve seen here, we’re on the right track,” Sears said. “It’s possible to achieve what we are envisioning.”

On Friday, the delegation toured MTSU’s Guy James Agricultural Campus and the university’s new dairy barn before leaving to visit the University of Memphis.

Stevenson said they were very impressed with the level of involvement they observed with students and faculty.

“Your emphasis on student-centered learning and student engagement are going to be two of the biggest things we are going to take home as lessons,” Stevenson said.

“We were also impressed with the level of passion among your faculty and the attention and caring of the work being done by faculty and administrators on campus.”

MTSU President Sidney A. McPhee said the university was honored to serve as a resource to The College of The Bahamas.

Liz Troup, milk processing manager for the MTSU Dairy, explains the new facility’s operations to a contingent of visitors from The College of the Bahamas Council during the group’s campus tour Feb. 15. Listening to Troup are, clockwise from lower left, Marion Bethel; chairman of The College of The Bahamas Council; MTSU President Sidney A. McPhee; and Michael Stevenson, secretary of the council.

“We have made student-centered learning and development of public-private partnerships one of our top priorities,” McPhee said. “We are proud to show them tangible examples of our devotion to student success.”

Stevenson and Sears said the University of The Bahamas will support efforts to diversify the nation’s economy, which today mostly centers on tourism and banking.

MTSU’s agriculture programs caught their eye since most of The Bahamas’ food supply is imported, Stevenson said.

“I think they got the lesson that our focus is on student-centered learning,” Gill said. “There are very few ways to better learn animal science than hands-on learning.”

“We spent time talking about how to engage students in learning about agriculture and their ability to make a living in agriculture,” he said.

On Saturday, the visitors will return to Murfreesboro to meet with the Rutherford County Chamber of Commerce to learn more about economic development and educational partnerships.