In the News: MTSU faculty stat.. 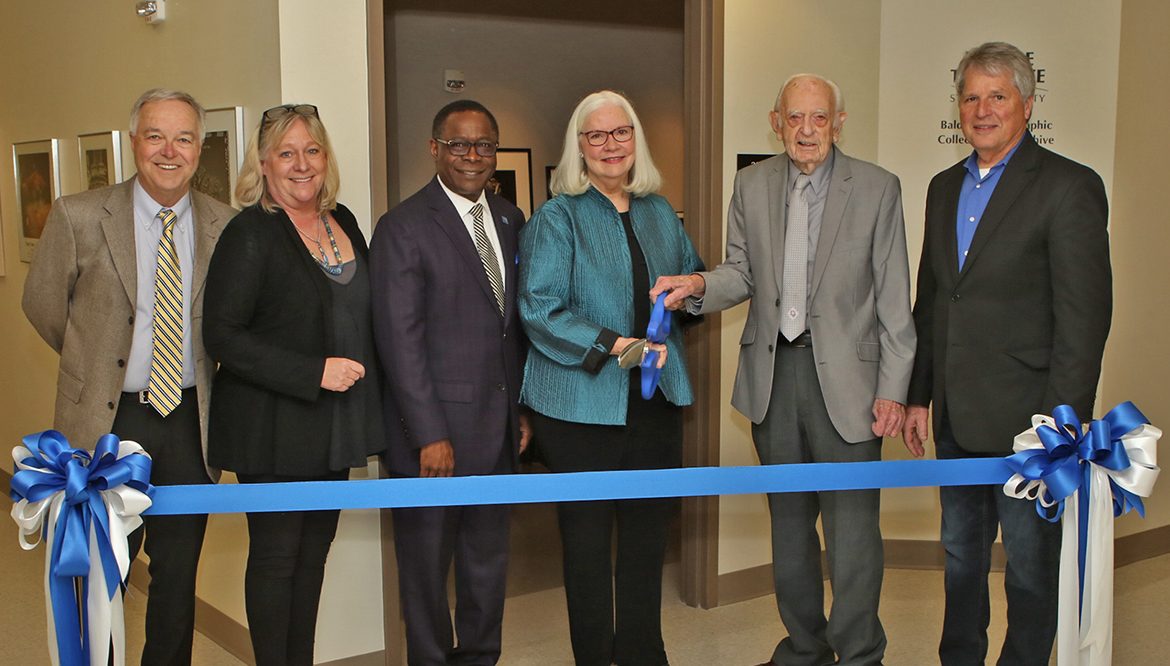 MTSU’s Baldwin Photographic Gallery now has a new state-of-the-art, temperature-controlled archive on campus that will allow faculty, staff and students to gain access to its extensive collection while also allowing the university to determine a more definitive value of a rich trove of visual art.

MTSU President Sidney A. McPhee joined Department of Media Arts faculty, staff and a host of gallery supporters recently to cut the ribbon on the home of the new Baldwin Photographic Collection and Archive located in Room 2300 on the second floor of the Miller Education Center at 503 E. Bell St. 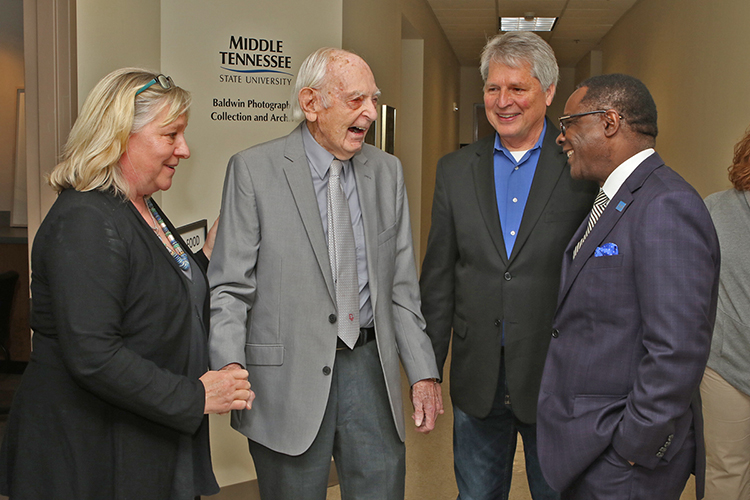 Also attending the March 20 ribbon-cutting were special guests Harold Baldwin, gallery founder and a professor emeritus, and Mary Alice Rouslin, widow of longtime gallery curator and professor Tom Jimison, who passed away in 2017. Over the years, Baldwin and Jimison built a permanent collection of purchased works by featured artists such as Ansel Adams, Harry Callahan, Edward Weston, Minor White and Jerry Uelsmann, to name a few, in addition to hundreds of prints by students.

“It’s worked out great,” said Baldwin of the new archive as he watched visitors tour the archive’s reading room. “It needed to be done.”

After founding the university’s photography program in 1959, Baldwin launched gallery exhibitions five years later. Jimison took over as curator in 1991 after Baldwin’s retirement and shepherded the gallery’s move, with Baldwin’s personal financial support, from the McWherter Learning Resource Center to its current location on the second floor of the Bragg Media and Entertainment Building.

With the establishment of the archive, which is equipped with a temperature- and humidity-controlled vault and a reading room area, faculty, students and the community can study the photographic works up close and use them for research across a variety of academic disciplines while also allowing faculty to teach the art and science of archiving and preserving.

“Thanks to Harold’s and Tom’s inspired vision, our entire community has opportunities to view exhibitions from nationally and internationally renowned photographic artists over the last half century,” McPhee told the crowd gathered in the atrium of the MEC.

“Their keen eye for talent, refined sense of aesthetic, and willingness to help nurture talent have resulted in a spectacular collection of work created by current students, alumni, and some of the great photographers of our time.”

Current gallery curator Jackie Heigle, also a media arts professor, said the first plan for the archive is to produce a public online catalogue of the entire collection, which she estimates includes as many as 1,500 prints. Such an effort will provide opportunities for student internships to help update digital records, she said.

“Our goal is to provide an online presentation of all the works in the collection so that people can look online to see what is there,” Heigle said. “And if they want to see the original works, which might be the case for people doing research … then we’ll bring the works out.” 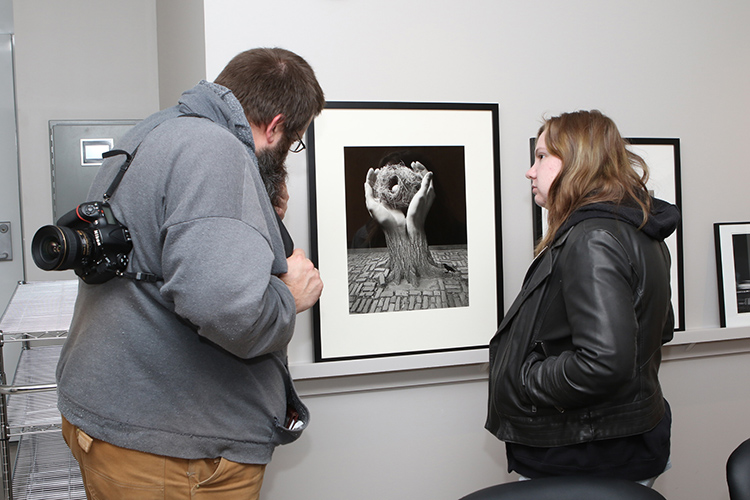 Attendees of the March 20 ribbon-cutting for the new Baldwin Photographic Collection and Archive view some of the prints on display in the archive’s reading room area on the second floor of the Miller Education Center on Bell Street. (MTSU photo by James Cessna)

The archive will also be used to conduct an official appraisal of the collection, said Billy Pittard, chair of the Department of Media Arts. “This facility will allow us to finally … actually do it. We’re going to be able to get a value of each item,” said Pittard.

He also noted that the addition of the archive allows the gallery to expand the types of exhibits featured while providing another layer of instruction to a “unique” photography program at MTSU that can train students in creative/fine arts photography, commercial photography and documentary photography.

Rouslin recalled how she and Jimison opened their home to the many visual artists over the years who had exhibits featured at the gallery. She’s asked Heigle for a list of all the exhibits hosted by the gallery during her husband’s tenure.

“It was such an invigorating part of Tom’s job at MTSU,” Rouslin said, holding the blue and white bow as a memento from the just completed ribbon-cutting. “It was a lot of hard work … Tom was a very quiet man, but he just made it all look effortless. He was a passionate photographer.”

The Baldwin Photographic Collection and Archive inside the Miller Education Center is available to the public by appointment only. To set up an appointment, email Heigle at Jackie.Heigle@mtsu.edu.

The gallery is open from 8 a.m. to 4:30 p.m. weekdays when MTSU classes are in session. A searchable campus map is available at http://tinyurl.com/MTParkingMap. Off-campus visitors can obtain a special one-day permit at http://www.mtsu.edu/parking/visit.php from MTSU’s Office of Parking and Transportation at 1403 E. Main St. 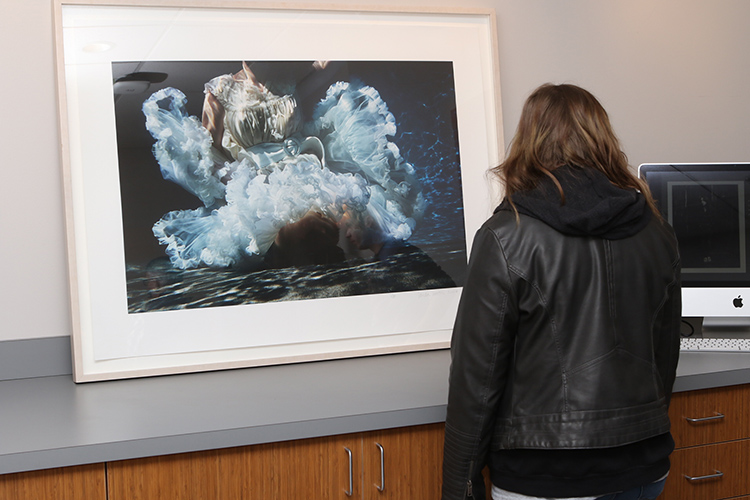 An attendee of the March 20 ribbon-cutting for the new Baldwin Photographic Collection and Archive view one of the prints on display in the archive’s reading room area on the second floor of the Miller Education Center on Bell Street. (MTSU photo by James Cessna) 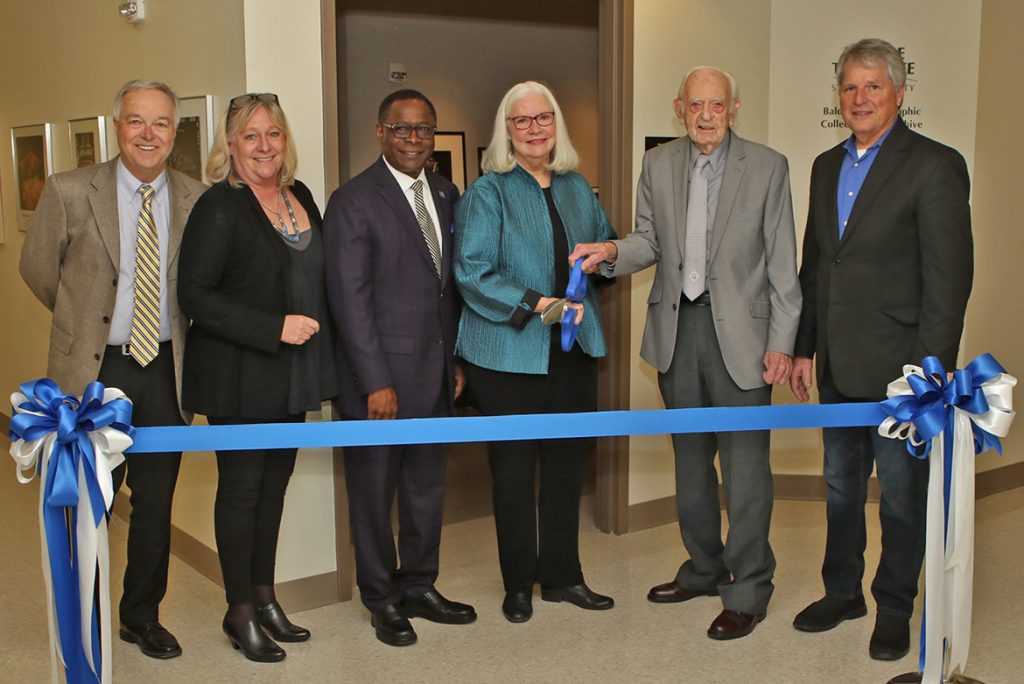