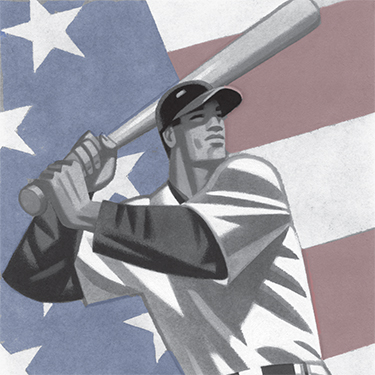 Jim Bouton, whose 1970 book “Ball Four” ripped the horsehide cover off Major League Baseball, is a “little nervous” about the impact of shorthand, abbreviations and out-and-out shortcuts on cohesive writing thanks to our blogging, tweeting, texting society.

Speaking during lunch April 5 at MTSU’s Baseball in Literature and Culture Conference, Bouton said he wanted to keep a focus on “the importance of books and writing, keeping the skill of communication.

“I’m a little nervous about all the shorthand we have with the electronics. We’re gonna lose the ability to have clean, clear, writing communication skills,” he said.

The 18th annual gathering of presenters who examine baseball from a scholarly perspective was held in MTSU’s James Union Building.

Bouton, a former pitcher with the New York Yankees, the now-defunct Seattle Pilots and the Houston Astros, admitted that his book may have had a lasting effect on sports journalism. His account of his experiences with the Pilots — now the Milwaukee Brewers — and Astros during the 1969 season was a no-holds-barred account of life in the majors.

“I guess I could be responsible for, or blamed for, depending on your point of view, seeing a more accurate view of things,” he said. “Years ago, baseball books were Mom and apple pie and cookies and Boy Scouts. But these were not Boy Scouts; these were real men.

“I think it’s a lot more interesting now and a lot more truthful. That’s the interesting thing. I remember my editor on ‘Ball Four,’ Leonard Shecter, he used to say, ‘You know something, Bouton? A guy could make a living just telling the truth.'”

In a 2002 poll by Sports Illustrated magazine, “Ball Four” was identified as the third most important sports book of all time.

“Indeed, the success of ‘Ball Four’ has opened the doors for more athletes to delve into the ‘tell all’ culture offered to us 24-7 by sports networks and Internet sites,” said Dr. Ron Kates, a professor of English at MTSU and co-coordinator of the conference with Dr. Warren Tormey.

When the book was first released, Bouton was vilified for destroying notions of baseball players as pure, wholesome role models raised to iconic status by a press corps willing to overlook the athletes’ infidelities, substance abuse and other shortcomings.

Dr. Andrew Hazucha delivered the conference’s keynote address, “A Jim Bouton Retrospective: Zen and the Politics of the Knuckleball.”

Hazucha is a professor of English and chair of the arts and humanities division at Ottawa University in Ottawa, Kansas. He is co-editor, along with Gerald C. Wood, of “Northsiders: Essays on the History and Culture of the Chicago Cubs.”

Presenters at the conference also discussed “Negro League Baseball in Verse,” “Why I Want the Cubs to Win the World Series,” “Jocks, Herbs and the 1936 Yankees” and “Facing Reality (TV): Pete Rose’s Biggest Obstacle to the Hall is Himself.”

The Baseball in Literature and Culture Conference was held annually at Indiana State University from 1995 until 2005 and has been held at MTSU since 2006.

“Since the conference started 18 years ago, the baseball-literature-and-culture genre has blossomed, in the process establishing footholds in established canon structures,” Kates said.

“Over the past eight years, our conference has been an interdisciplinary, worldwide platform from which attendees can pursue scholarly projects.”