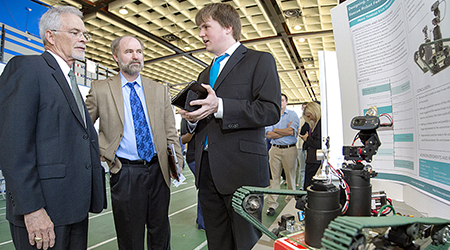 While MTSU recording industry major Kristen Brassel was belting out bluesy and folksy ballads Friday afternoon in a tent inside Murphy Center, more than 300 of her undergraduate and graduate student peers were showcasing their research.

Cody Hazelwood, right, explains his Scholars Day display, a low-cost, autonomous search-and-rescue robot, to Dr. Mike Allen, left, vice provost for research and dean of the College of Graduate Studies, and Todd Gary, a consultant and grant writer in the MTSU Office of Research. (MTSU photos by J. Intintoli)

It was all a part of the universitywide Scholars Day, which concluded the five-day MTSU Scholars Week 2013.

Across the way on the Murphy Center track, Cody Hazelwood had the assistance of a robot to explain his research: “Designing, Building and Testing a Low-Cost Autonomous Search and Rescue Robot Featuring Smartphone Surveillance and Control.”

Closer to the performance tent, Michael Floyd, a second-year master’s degree candidate in biology who plans to graduate in May, provided one of the most unique research projects.

Floyd is in an early Phase 1 exploration of Chinese herbal extracts that inhibit the growth of trapyson, which causes African sleeping sickness.

He said an estimated 30,000 to 500,000 people die annually from the disease, which is transmitted by the tsetse fly. Eight to 10 people die after they receive the arsenic-based treatment currently used to battle the ailment.

“It’s a great project,” Floyd said. “The results have turned out fantastic so far.”

Brassel, a commercial songwriter and senior from Grenada, Miss., sang and played four songs on her acoustic Martin guitar to a small but appreciative audience. She said she is used to playing to small crowds.

“I love a small audience. I play for waiters and people packing up every night,” Brassel, a senior from Grenada, Miss., said, adding that she has performed at Nashville’s Bluebird Café and Murfreesboro’s 3 Brothers.

“Being in recording industry, I forget what’s on campus. I haven’t gotten to see everything (at Scholars Day), but this is amazing to see.”

Todd Gary, recently hired as a part-time consultant and grant writer for the MTSU Office of Research, summed up the day perfectly.

“This is a fantastic time for students to share and showcase all of the work that they have put into it, all of the genius and scholarship,” he said. “This is the equivalent of a concert to a musician or a book signing to an author. This the culmination of all of their hard work and a very significant day.”

In addition to the musical and poetic performers, undergraduate and graduate students presented multimedia projects, faculty showcased their research posters and information booths for centers, institutes and programs on campus were available.

A large crowd attends the April 5 universitywide Scholars Day on the track level of Murphy Center.