MTSU’s Baum sworn in to Genera..

New MTSU study estimates alumni generated $8B in b... 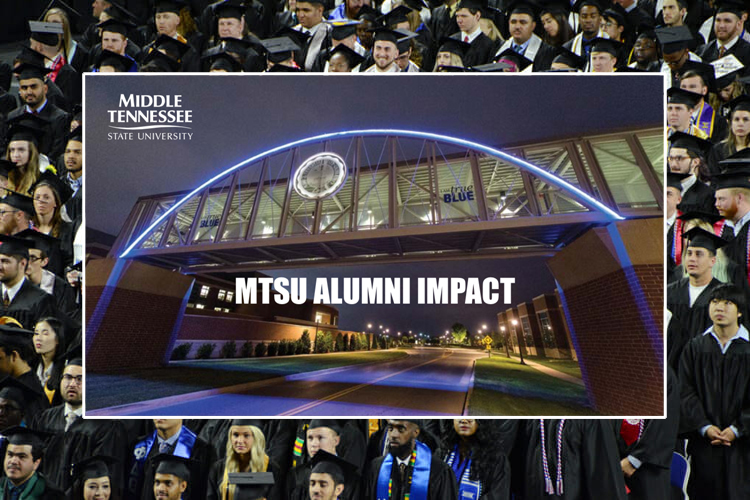 Middle Tennessee State University already boasts almost 100,000 alumni in Tennessee alone, adding 5,230 more alums — many who will remain in the Midstate — during the latest academic year.

Many of those alumni start families, build careers and businesses, buy homes, goods and services, all while expanding the tax base. MTSU’s Business and Economic Research Center, also known as BERC, recently released a study that sought to better quantify the economic impact Blue Raider alums have across the state.

The full study can be viewed at https://bit.ly/2SgbMGD.

Murat Arik, director of BERC and study author, said the value of an MTSU degree is sizable, particularly for the many first-generation college students who come to the university “to unlock their futures,” he said.

With more than 300 combined undergraduate and graduate programs, MTSU offers degrees across the arts and sciences, from theatre to teaching, mechatronics to music, aerospace to audio engineering, language to logistics, and much more.

“More and more of these businesses are requiring advanced skill sets,” said Arik, noting that MTSU’s presence in the Midstate factored into Amazon’s recent decision to locate an operations center in Nashville. “More businesses out there are looking for employees with a college-level education.”

Not surprisingly, MTSU alums have an outsized presence in the university’s home county of Rutherford, but also in adjacent counties such as Bedford and Cannon where “for every two degree-holders you meet on the street, one will be an MTSU alumnus,” Arik said.

MTSU continues to be the No. 1 choice for Tennessee transfer students, as well as the top provider of graduates to the Greater Nashville economy and the top choice of Tennessee adults (ages 25 and up) seeking a four-year degree.

Alumnus Darrell Freeman Sr. isn’t shy about being a proud Middle Tennessee State University alum and challenged the 1,700-plus new alumni to make their own impact during welcoming remarks inside Hale Arena at the recent fall commencement at Murphy Center.

“Today, we celebrate your many accomplishments,” Freeman said. “Tomorrow you will change the world. Do it with integrity, with truth and do it with honor.”

A first-generation college student himself, Freeman earned his bachelor’s and master’s degrees from MTSU before founding Zycron Inc., a multimillion-dollar information technology services and solutions firm based in Nashville that he sold in 2017 for more than $20 million.

Freeman, now executive chairman at Zycron, also currently serves as vice chairman of the MTSU Board of Trustees. He’s an example of the many successful MTSU alumni — such as fellow trustees J.B. Baker, CEO and owner of Spring Logistics, and Andy Adams, former chairman and CEO of National Healthcare Corp., to name a few — who remained in the Midstate to launch successful professional careers.

“I came to MTSU in 1983, the first person in my family to go to college,” Freeman said. “… Without MTSU I don’t know where I would be. I’ve got some guesses. But there is a student on this campus waiting for us to change their lives.”

MTSU’s Business and Economic Research Center operates within the Jennings A. Jones College of Business. For more information about the BERC alumni impact study, contact Arik 615-898-5424 or email Murat.Arik@mtsu.edu.