UPDATE: Be a #trueGIVER! Deadl.. 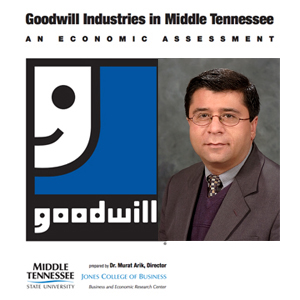 NASHVILLE, Tenn. — Every dollar spent by Goodwill Industries of Middle Tennessee creates an additional $3.30 in benefits to the 48 counties it serves, and total economic impact of the not-for-profit is approaching a half-billion dollars.

These are among the findings of a new study by the Business and Economic Research Center at Middle Tennessee State University, which also predicts a 66 percent growth in the local Goodwill’s employment impact.

Within a decade, the organization is forecast to be responsible for an annual presence of 21,000 people in the workforce, largely through the efforts of its Goodwill Career Solutions centers and thousands of employer partners.

“This study validates what we have long suspected — that Goodwill is much more than a nonprofit and social enterprise. It’s an economic engine that propels businesses and communities forward while giving a hand up, rather than a handout, to those individuals who need it most,” Bourlakas said in a Goodwill news release.

The 58-year-old organization serves half of Tennessee’s counties in a territory stretching from Cookeville to Union City. It is one of five independently operated Goodwills in the state.

The local Goodwill provides free training and employment opportunities for people struggling to find and keep jobs for a wide variety of reasons, such as disabilities, criminal records or lack of computer skills, and to others simply wanting to advance their careers. This mission is funded through the sale of donated goods in Goodwill’s retail stores.

In 2014, the agency helped 9,558 people find jobs. The vast majority went to work with other employers in Middle and West Tennessee.

The effect of those job placements — including salaries earned by formerly unemployed people, the impact of their spending and resulting sales taxes collected by the state — are included in MTSU’s calculations, along with Goodwill’s direct hires and salaries.

Click the image for a full size pdf version of the full report.

Highlights of the study include:

The assessment did not attempt to measure Goodwill’s many welfare benefits to taxpayers, such as reductions in unemployment compensation payments, decreases in the prison population through prevention of recidivism or curbed landfill use through resale of used goods, salvage and recycling.

The BERC may attempt to gauge those benefits in a future study, Arik said.

In 2013, the BERC and the Center for Nonprofit Management conducted an assessment of the entire Nashville MSA nonprofit sector, and in August, the MTSU facility partnered with the Nashville Health Care Council to release a study of the impact of Nashville’s health care industry.

Burns Phillips, commissioner of Tennessee’s Department of Labor & Workforce, previewed the results of the Goodwill study.

“The primary function of the Department of Labor & Workforce is to assess the needs of business and provide job-seekers opportunities for training that lead to employment. This approach has proven successful in getting the right person, with the right skill sets, in the right job at the right time,” Phillips said.

“My workforce development staff and I see that Goodwill Industries shares this philosophy and are impressed with the employment outcomes achieved by its training and employment opportunity programs.”

He said he looks forward to an expanded partnership with Goodwill to achieve even greater employment outcomes for Tennessee’s citizens and business community.

The complete, 65-page economic impact assessment of Goodwill Industries of Middle Tennessee can be viewed at www.mtsu.edu/berc/docs/goodwill.pdf. More information on Goodwill’s impact can be found at www.giveit2goodwill.org/annualreport.

The MTSU BERC supports the public service activities of the Jennings A. Jones College of Business. The organization engages in a variety of educational and research activities aiding businesses, government, civic organizations and other interested individuals to help them understand the economic and business climate of Tennessee. For more information, please visit www.mtsu.edu/berc.