UPDATE: Be a #trueGIVER! Deadline nears for employ...

UPDATE: Be a #trueGIVER! Deadline nears for employee giving 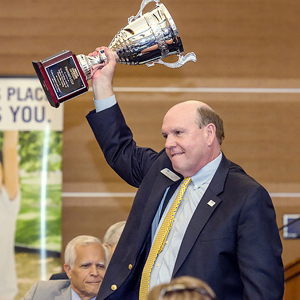 The university has reached 69 percent of its $120,000 pledge goal, according to the latest totals available, meaning there’s still work to do to help those most needy in the community.

That need applies right here at home on the MTSU campus, with a portion of funds supporting the Ann Campbell Early Learning Center (formerly Project HELP) on campus to provide inclusive early childhood education to children 15 months through age 5 with and without developmental delays or disabilities.

The clock is ticking! Donations can be made easily online at www.mtsu.edu/givemtsu. Be a #trueGIVER!

To drive home his message to university leaders to spread the word about the need for charitable giving, MTSU President Sidney A. McPhee referenced the recent and highly publicized visit to the United States by Pope Francis.

“His single message was to help others … to help others that are in great need,” McPhee told a Sept. 28 gathering of deans, top administrators and staff inside the Student Union Ballroom to kick off the university’s annual Charitable Giving Campaign, which runs Oct. 1 to Nov. 1.

With slightly more than $119,000 pledged by MTSU employees last year, this year’s goal of $120,000 will be championed under a campus theme of “#trueGIVER”  alongside the Tennessee Board of Regents’ theme, “Jump into Giving.”

More than the dollar amount, however, McPhee stressed his hope that the university’s percentage of participation will increase significantly this year among the campus’ roughly 2,200 full-time employees.

The payroll deduction option is again available and “is a very cost effective way of making your gift,” noted campaign chair Dr. Gloria Bonner, assistant to the president in the Office of Community Engagement.

Bonner reminded 2015 donors that their contribution doesn’t automatically roll over into the new year, so a new pledge form must be filled out. Donations can be made online at www.mtsu.edu/givemtsu.

MTSU alumna Meagan Flippin, president and CEO of United Way of Rutherford and Cannon Counties, thanks MTSU for its 2015 Charitable Giving Campaign that kicked off Monday inside the Student Union Ballroom.

Stephanie Folkmann, director of development for Special Kids and a 2005 MTSU graduate, was among the nonprofit representatives on hand for the campus kickoff. She noted that giving campaigns like the university’s allow Special Kids to offer its therapy and nursing services to families on a more affordable sliding scale.

“We have many patients who struggle to afford normal medical services,” Folkmann said. “So funds that are raised through campaigns like this … help us fill in the gaps for those families and help us continue to serve those families.”

Student interns from the university gain valuable hands-on experience by volunteering at the faith-based agency. Faculty also get involved; a small group of faculty and students from the mechatronics program in the Department of Engineering Technology recently visited the agency to modify several battery-operated vehicles to make them safer and more accessible to children served by Special Kids.

“When (donors) make an investment, they’re not just investing in someone in need, they’re investing in the community where they live and work,” she said.

Among other nonprofit organizations in attendance at the Sept. 28 kickoff were the United Way of Rutherford and Cannon Counties, Greenhouse Ministries, Community Shares, Domestic Violence and Sexual Assault Services and Interfaith Dental Clinic. Employees can choose from among 140-plus nonprofits to direct their donations.

MTSU colleges will again have the extra incentive of trying to wrestle the Provost Cup from the Jennings A. Jones College of Business, which is going for a three-peat as the college with the highest rate of participation.

Provost Brad Bartel launched the cup competition two years ago as a way to inject some friendly competition for a great cause.

Dr. David Urban, dean of the Jennings A. Jones College of Business at MTSU, holds up the Provost Cup his college has won the past two years for having the highest participation rate among the university colleges. MTSU kicked off its 2015 Charitable Giving Campaign on Monday inside the Student Union Ballroom.

Bartel reminded the crowd that although Murfreesboro and the Midstate area has a high quality of life, the community is by no means immune to issues such as domestic violence, homelessness, poverty, drug abuse and lack of access to medical care.

“Humanity is all about altruism,” said Bartel, who previously served on the local United Way board. “We need to give back. … Every society on the face of the earth is judged by how well they treat people who are less fortunate.”

With the shiny Provost Cup in hand Sept. 28, Jones College Dean David Urban told the group that he’s visited with numerous companies and organizations in the area such as Nissan and Bridgestone who have robust giving campaigns with high participation.

“The leadership in the organization, they buy in to doing this and they reinforce the message,” he said, adding that sharing the stories of how area nonprofits help employees can provide powerful incentives for fellow employees to participate as well.

United Way CEO and MTSU alumna Meagan Flippin thanked MTSU for embracing the opportunity to “set such an example for our community by improving lives by so many programs and services represented here today.”

Anyone with questions about the campaign should contact Allison McGoffin in the Office of the Provost at 615-898-2953.