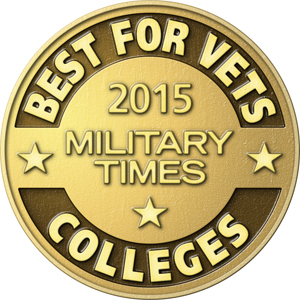 Middle Tennessee State University has again been named among the best colleges nationally for supporting student veterans by the Military Times.

The publication announced its Best for Vets: Colleges 2015 rankings this week as the nation celebrates Veterans Day. In their fifth year, the rankings factor in a comprehensive school-by-school assessment of veteran and military students’ success rates.

Of the top 100 schools ranked, MTSU was the only Tennessee four-year college to make this year’s list and was also named to the 2014 list. The Jennings A. Jones College of Business at MTSU was named a “Best for Vets” business school for 2014 earlier this year.

“MTSU is thankful for the many veterans who’ve chosen to pursue their college degrees on our campus,” MTSU President Sidney A. McPhee said. “Our faculty and staff will continue to support them and their families by making resources available to help them successfully obtain their degrees. And of course, we honor their service to our country and community.”

“Best for Vets: Colleges 2015 is an editorially independent news project that evaluates the many factors that make an organization a good fit for service members, military veterans and their families,” according to a Military Times release.

MTSU currently has a veterans’ population of just over 1,000, which includes veterans and active duty service members and their dependents.

MTSU was the first school in Tennessee with an on-campus representative for VetSuccess, a collaboration between the university and the U.S. Department of Veterans Affairs to provide a place where students with military service can gather to obtain assistance and peer support.

The university has a standing Veterans and Military Affairs Committee, which recently worked with the Information Technology Department to develop an analytical information system that can provide an on-demand snapshot of the campus veteran community. This will allow the committee to make data-informed decisions and create programs and policies tailored specifically for the veteran community on campus.3

MTSU representatives are also deeply involved in the Tennessee Veteran Education Task Force that aims to help Tennessee become the No. 1 state in the country for veteran educational achievement and employment. Also active on campus is the student-led veterans group, Blue Raider American Veteran Organization, or BRAVO.

The survey-based “Best for Vets: Colleges” doesn’t manipulate mainstream research to skew more “veteran,” according to the Military Times. Editors say the detailed survey requires schools to “meticulously document a tremendous array of services, special rules, accommodations and financial incentives” offered to military and veteran students and to describe many aspects of veteran culture on a campus.

“We factor in what is, to our knowledge, the most detailed school-by-school data on veteran students’ academic success anywhere, including graduation, retention, persistence and course completion rates,” said Amanda Miller, editor of Bets for Vets.

Two years ago, only 11 percent of the hundreds of schools surveyed could provide that level of detail. This year, that figure is up to 45 percent.

“By recognizing only the schools that do the most, we believe we’re helping to raise the bar in veteran student services,” Miller added.

For the full Best for Vets: Colleges 2015 rankings, go to www.militarytimes.com/bestforvets-colleges2015.