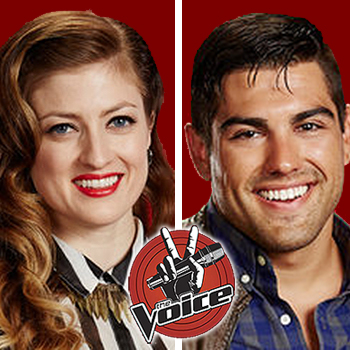 MTSU once again gave viewers a dose of music reality as a student and an alumna sang their way onto season seven of the NBC competition “The Voice.”

Duggan was initially chosen as a member of singer-songwriter Gwen Stefani’s “team” on the weekly reality show. She sang Kelly Clarkson’s “Already Gone” for her “blind audition,” when the celebrity judges can only hear, not see, the contestants.

Senior commercial songwriting major Jonathan Wyndham had all four celebrity judges scrambling to add him to their teams when he performed A Great Big World’s “Say Something” in his audition.

Wyndham chose Maroon 5 frontman Adam Levine as his mentor and team leader but was sent home during the “battle round” competitions between members of each judge’s team, which began airing Oct. 13.

Both MTSU singers’ auditions aired during the Sept. 30 episode of “The Voice.” This marked the third year that “The Voice” has chosen MTSU alumni or students from among thousands of hopefuls to compete for $100,000 and a recording contract.

You can watch Wyndham’s “battle round” performance from the Oct. 13 episode below.

Stefani kept singer Sugar Joans instead of Duggan after the competitors sang Destiny’s Child’s “Survivor.” Judges Levine and Pharrell Williams took advantage of the ouster to try to “steal” Duggan for their own teams. Duggan chose to work with Williams, keeping her in the competition until the Nov. 11 live performance.

You can watch Duggan’s final “Voice” performance, a rendition of Brenda Russell’s “Piano in the Dark,” from the Nov. 11 episode below.

Duggan, a Brentwood, Tennessee, native who now lives in Atlanta and works in marketing and radio, called the experience “surreal” and said she “didn’t expect it to be as fun as it was.”

In addition to her August 2009 degree from MTSU with honors and membership in Phi Kappa Phi honor society, Duggan represented the university as Miss MTSU 2007 and competed in the Miss Tennessee pageant.

You can watch Duggan’s audition from the Sept. 30 episode below.

The judges praised the emotional delivery and “vulnerability” of his audition song.

You can watch Wyndham’s audition from the Sept. 30 episode below.

Auditions for the seventh season of “The Voice” were recorded last summer and began airing Sept. 22. The pre-recorded “battle rounds” between the singers began airing Oct. 13, ultimately leading to live performance shows with an audience-voted winner.

The auditions narrowed 56 successful hopefuls down to 40 to create 10-member teams for each of the celebrity judges. Country singer Blake Shelton is this season’s fourth celebrity judge.

This is the second consecutive season that MTSU has been represented in the NBC reality show. MTSU 2009 recording industry grad Austin Ellis made his debut last spring; you can read more about him here.

Another MTSU alumnus, 2013 advertising/public relations grad Ben Briley of Gallatin, Tenn., reached the top 11 on Fox’s “American Idol” before the audience and judges sent him home last March. Read about him here.

MTSU vocal performance major Jonathan Allen sang himself into the summer 2013 semifinals of “America’s Got Talent” at Radio City Music Hall before that opportunity ended. Recording-industry major Curtis Holland tap-danced his way past hundreds of other hopefuls to make the Top 20 of Fox’s summer 2013 “So You Think You Can Dance,” but a shoulder injury eliminated him from the competition. You can learn more about them here.