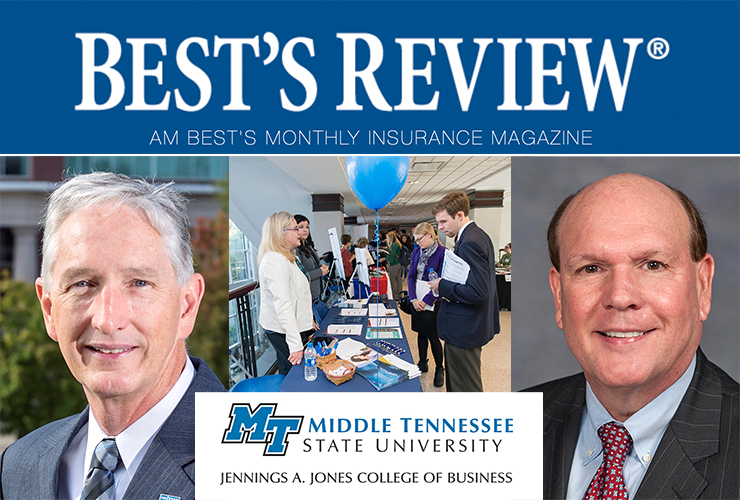 Middle Tennessee State University’s insurance program was ranked best in the nation among industry professionals, according to a survey by the global ratings agency A.M. Best.

MTSU’s No. 1 ranking was highlighted in an article for the A.M. Best Best’s Review magazine, which outlined how the Jones College of Business Risk Management and Insurance Program transitioned from a concentration to a full major four years ago when MTSU professor Dave Wood came to the university as the new Martin Chair of Insurance.

“We’ve been the best kept secret,” Wood told the publication. “But we’re trying to change that. The secret, it seems, is out.” Read the full article by Managing Editor Kate Smith at https://bit.ly/383vrBn.

Jones College Dean David Urban said the ranking is a testament to Wood’s leadership in growing the program from regional dominance to national prominence by engaging industry influencers like A.M. Best, a credit rating agency that uniquely focuses on the insurance industry.

“This is not something that happened overnight, but without question, the tipping point came in 2016 when we brought in Dave as holder of the Martin Chair of Insurance,” Urban said. “My charge to him was to take our very solid foundation and move it to the next level in terms of national exposure. Clearly, Dr. Wood has done that here at MTSU.”

Best’s Review survey of RMI programs asked carriers, readers, and other insurance professionals which RMI programs “are doing the best job preparing students for careers in the industry.”

Of the 444 votes cast, MTSU received 62, or 14%. And while close to 95% of MTSU’s votes came from within Tennessee, the article notes that the vast majority (nearly 70%) of its votes came from industry professionals with no affiliation with the school, other than hiring its graduates.

“This top ranking reflects MTSU’s commitment to preparing students who are ready to work and can contribute immediately to the regional and statewide economy,” said MTSU President Sidney A. McPhee.

“The fledgling program was hailed for the real-world experience it provides students, from offering a study abroad program in London to coordinating not only internships but also part-time jobs for them within the industry,” the article states.

The survey included testimonials from industry professionals who touted MTSU as “a role model for other schools” and “is diligently working on properly preparing their students for jobs in our industry.”

“The No. 1 ranking is a tribute to the professional success of our graduates, and our students know that they are beginning their careers exceptionally well-prepared by the Jones College of Business,” said Wood.