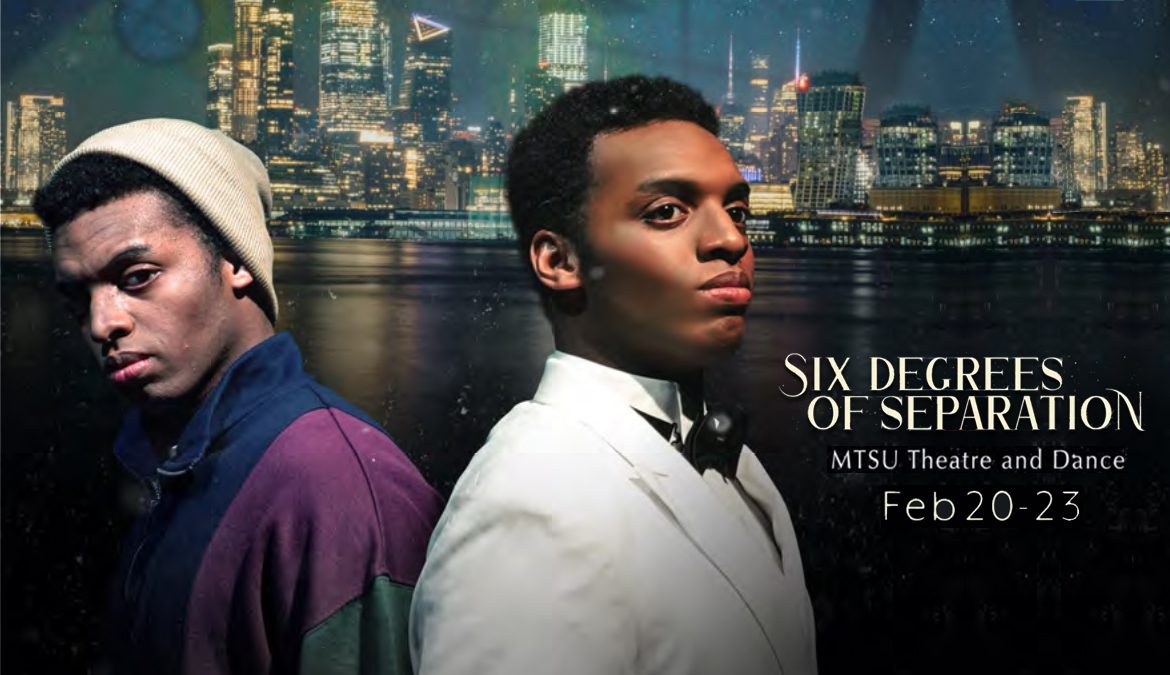 MTSU Theatre students are challenging audiences to face their own beliefs about human connections when they present “Six Degrees of Separation,” the Tony Award-winning drama that’s as relevant in 2020 as its 1990 Broadway premiere. 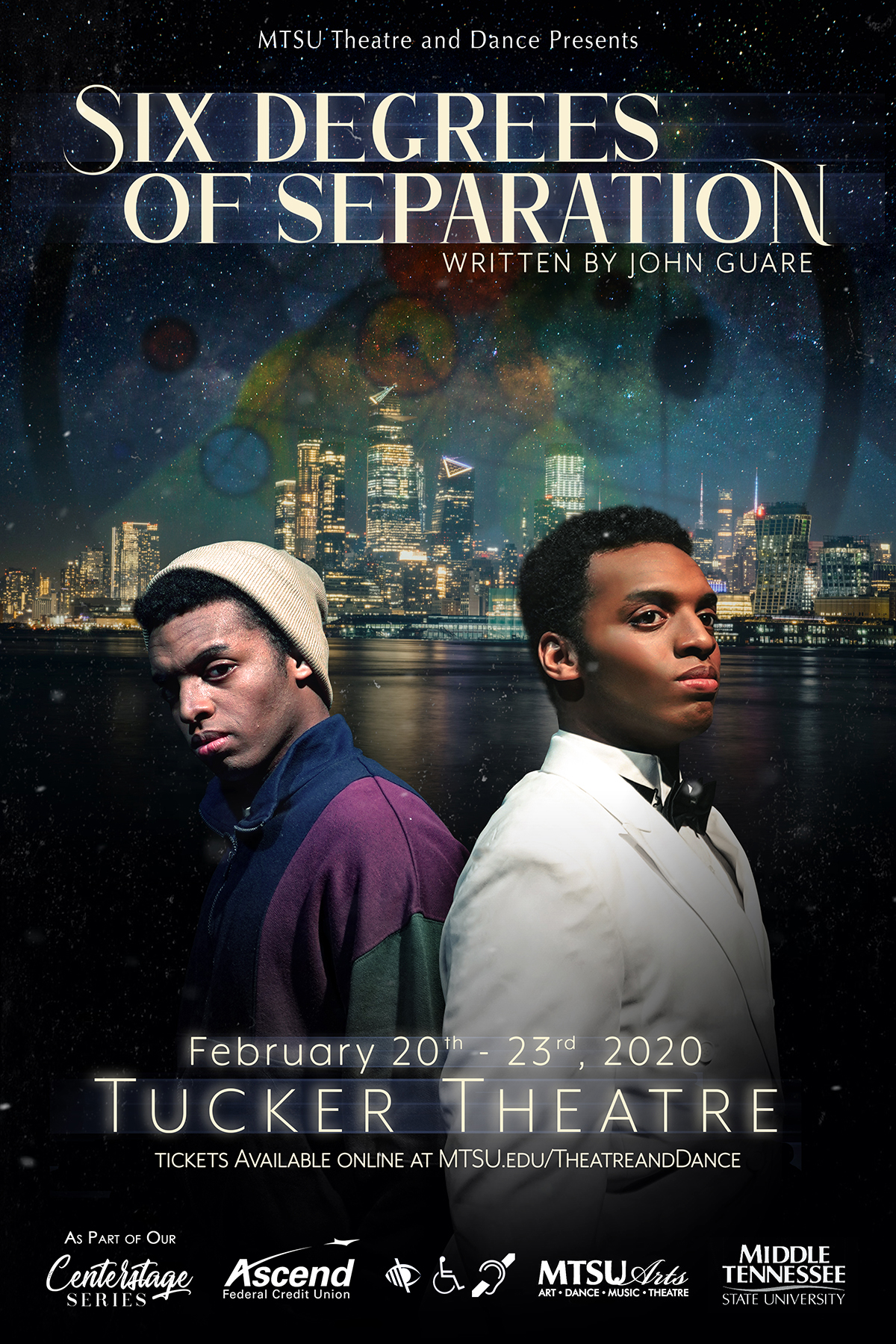 Tickets, available now at www.mtsu.edu/theatreanddance, are $10 general admission and $5 for seniors 55 and older and K-12 students. MTSU students will be admitted free at the box office with a current ID.

Theatre professor Kyle Kennedy is directing this MTSU Arts production of playwright John Guare’s “based on a true story” play, which follows the trail of connections made and destroyed by a young man gifted in changing his persona to fit his audience.

“The man who sought true human connection and his own brand of fame did indeed find it, but not in the way he expected,” Kennedy says.

The young man, claiming he was the son of actor Sidney Poitier and a college friend of a wealthy couple’s children, ingratiated himself into New York society and charmed at least a dozen people, including celebrities, into giving him money, shelter and access to other potential victims.

Guare heard about the man from friends who’d been conned and wrote the play, turning it into an observation on how every human is linked to each other, no matter the physical or other perceived distance, through their mutual acquaintances, friends and family.

“I read somewhere that everybody on this planet is separated by only six other people. Six degrees of separation, between us and everybody else on this planet,” the character Ouisa Kittredge muses after the con is discovered.

“Six Degrees of Separation” won the Tony for best director and multiple Obie Awards in its initial theater run. Guare also was nominated for a Pulitzer Prize for Drama, and the 1993 film version, featuring actors Will Smith and Stockard Channing, earned Oscar and Golden Globe nominations.

A complete list of the “Six Degrees” cast and crew is included in the show program, available here.

Tickets also will be available at the Tucker Theatre box office one hour before curtain times. For more information about the show and tickets, visit www.mtsu.edu/theatreanddance. 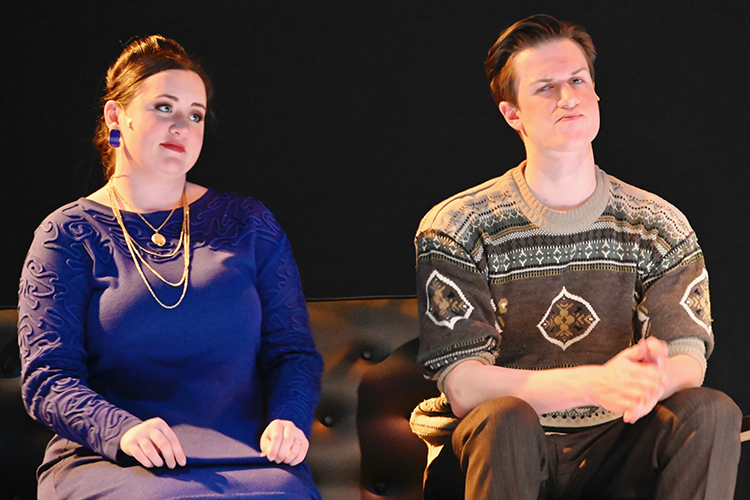 MTSU sophomore Aubrey Zurhellen, left, of Covington, Tenn., rehearses a scene from the MTSU Theatre production of “Six Degrees of Separation” with sophomore George Sekeres of Goodlettsville, Tenn., to prepare for the Feb. 20-23 performances in Tucker Theatre. Zurhellen plays “Kitty” in the MTSU show, and Sekeres plays “Larkin.” (MTSU photo by Andrew Oppmann) 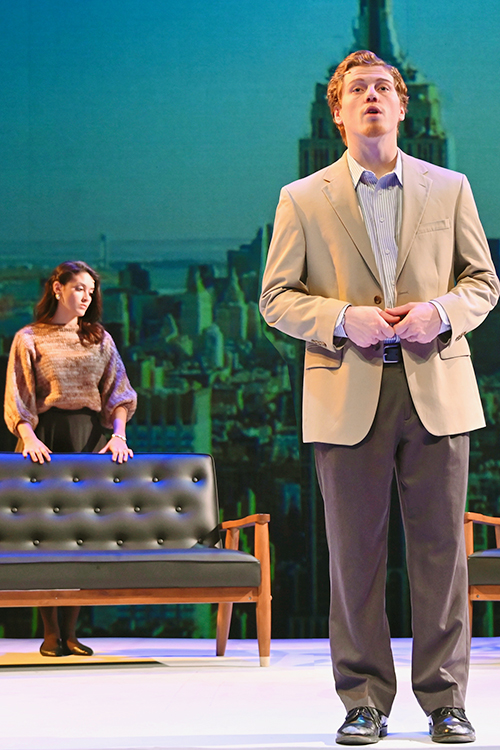 MTSU senior Nate Bumpus of Cumberland Furnace, Tenn., rehearses a scene from the MTSU Theatre production of “Six Degrees of Separation” in the foreground as fellow senior Alexa Pulley of Cunningham, Tenn., pauses upstage to prepare for the Feb. 20-23 performances in Tucker Theatre. Bumpus plays “Flan” in the MTSU show, and Pulley plays “Ouisa.” (MTSU photo by Andrew Oppmann)