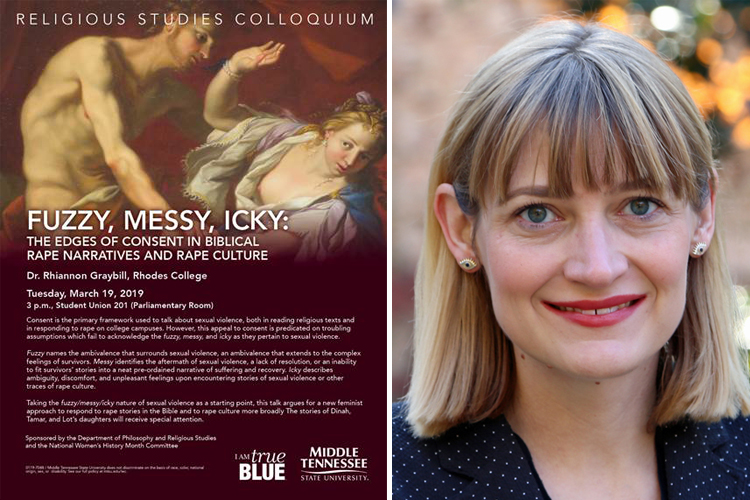 A scholar who offers a new feminist approach to reading Biblical tales of sexual assault will deliver the address at MTSU’s Religious Studies Colloquium.

Rhiannon Graybill will present “Fuzzy, Messy, Icky: The Edges of Consent in Biblical Rape Narratives and Rape Culture” is slated for 3 p.m. Tuesday, March 19, in the Parliamentary Room on the second floor of the Student Union.

A searchable campus map is available at http://tinyurl.com/MTParkingMap. Off-campus visitors attending the event can obtain a special one-day permit at http://www.mtsu.edu/parking/visit.php.

Graybill is the Millard Professor of Religion and director of the Gender and Sexuality Studies program at Rhodes College in Memphis. She finds fault with the use of consent as the primary framework used to talk about sexual violence, both in reading religious texts and responding to rape on college campuses.

Her lecture will focus on the Biblical stories of:

In explaining her title, Graybill writes:

This event, which is sponsored by the Department of Philosophy and Religious Studies and the MTSU National Women’s History Month Committee, is free and open to the public.

For more information, contact Rebekka King, an assistant professor of religious studies, at 615-898-2907 or rebekka.king@mtsu.edu.