MTSU is honoring a gifted sculpture professor and providing a student with financial help to earn an art degree with a new Department of Art and Design scholarship. 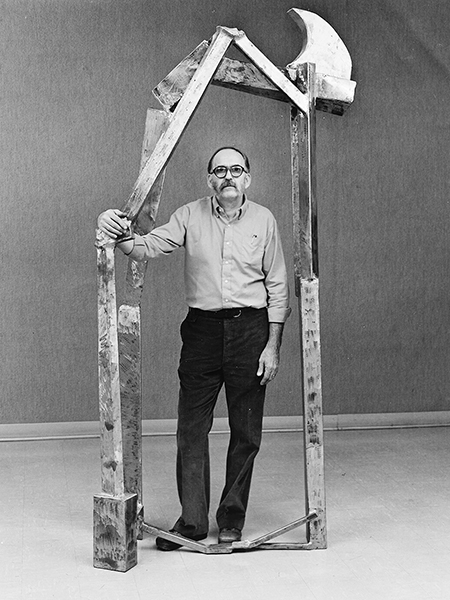 MTSU art professor James S. Gibson poses with one of his sculptures, “Bird Icon,” in this November 1983 photo. The piece, made of welded corten steel, measures 8.5 feet tall, 3 feet wide and 2 feet deep. Gibson, who taught at MTSU from 1970 to 1999, was named a professor emeritus in 2000. He died in August 2018, and his family recently established a scholarship for a junior or senior sculpture student. (Photo courtesy of the College of Liberal Arts)

James S. Gibson, who taught at MTSU from 1970 to 1999 and was named a professor emeritus in 2000, was a sculptor of national renown, creating more than 500 pieces during his lifetime.

His work is part of private and public collections both local and national, including the Frist Center for Visual Arts, Vanderbilt University, Nissan and Bridgestone, as well as in a place of honor in MTSU’s public collection.

He worked in different media, including wood, steel, aluminum, bronze and brass, and also created 60 prints over his lifetime, once noting that teaching was a catalyst for his creativity.

“When my teaching goes well, my work goes well,” the professor said. “My work is a visual product influenced by memories, experiences, dreams, visions, and things not known.

“To paraphrase Joseph Campbell, in my work, ‘I try to render a sense of existence, not an assurance of some meaning.’”

The new “James S. Gibson Sculpture Scholarship,” established last December by the professor’s family, will be awarded to a junior or senior seeking a Bachelor of Fine Arts degree in studio art with an emphasis on sculpture, said Meredith Kerr, development director for the College of Liberal Arts, home of the Department of Art and Design.

The scholarship recipient must have at least a 3.0 GPA when applying. Students from Tennessee and West Virginia will receive special consideration.