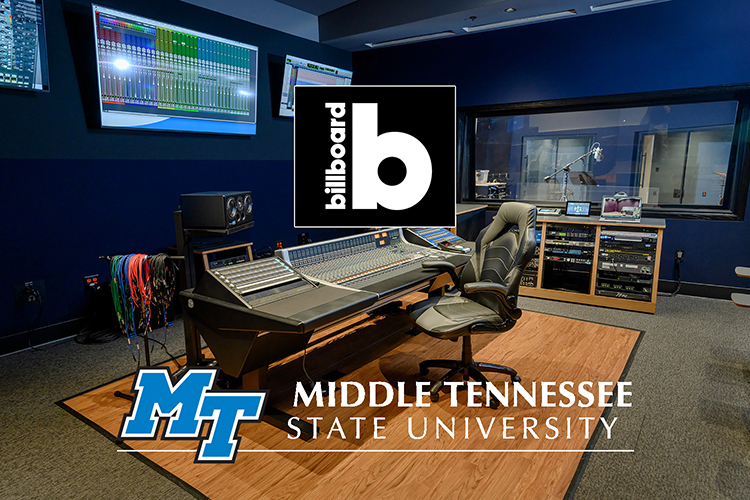 MTSU’s Department of Recording Industry — and the College of Media and Entertainment that houses it — are marking an eighth year on Billboard‘s latest international list of top music business schools, once again earning acclaim for the program’s diversity, depth and longevity.

In the article “Billboard’s 2022 Top Music Business Schools Revealed,” the magazine also says “opportunities abound” for students’ professional development, thanks to participation in events like Bonnaroo and the CMA Music Festival; the presence of an active on-campus music venue, the Chris Young Cafe; and the student-run record label, Match Records.

MTSU’s been on Billboard’s best music business schools lists since 2013, receiving recognition that first year for the recording industry program’s entrepreneurial turn. The magazine has published seven such lists since then, plus this year’s; it skipped a 2015 compilation and didn’t publish one for 2021 because of the pandemic.

“I am delighted that MTSU’s Department of Recording Industry has once again made the Billboard list of the top music business schools worldwide,” said Beverly Keel, media college dean and a former recording industry department chair. “This accomplishment is an achievement for our dedicated faculty and staff.

“This has been a tremendous year for our recording industry students, from participating in Grammy Week festivities to working a stage at Bonnaroo. Our alumni, who include Chris Young, Mitchell Tenpenny, Hardy, Hillary Scott of Lady A and so many others, are also enjoying a great year, and we are so proud of all that they do.

“We’re in the midst of another groundbreaking year, so there will be more exciting news coming soon.”

49 years of real-world prep for students

MTSU’s Department of Recording Industry was founded in 1973, opened its first campus recording studio in 1980 and was the first program in the country to release a fully student-created CD in 1985. It also collaborates with MTSU’s School of Music on a “music industry” minor for students in music-industry entrepreneurship or recording industry.

NBC News began calling MTSU a “Grammy-winner factory” in 2019 in the wake of alumni, students’ and staffers’ multiple nominations and wins from the industry’s top honor.

MTSU alumni, former or current students, and faculty from across the university have been a part of more than 134 Grammy Award nominations in the last two decades. The number of MTSU-connected Grammy winners since 2001 currently stands at 15 with a total of 37 Grammys, including nine repeat recipients, in categories from classical to pop to rock to country to gospel.

MTSU students, alumni and faculty also have been a consistent force in network TV music competitions, including “American Idol” and “The Voice,” since the shows began more than 20 years ago.

Hunter Wolkonowski of Winchester, Tennessee, a music business graduate who performs under her stage name “HunterGirl,” is MTSU’s most successful “American Idol” competitor so far with her No. 2 finish in May.