It wasn’t exactly the “nickel tour,” but a group of some 70 seniors from Murfreesboro’s Blackman Collegiate Academy got more than their money’s worth while being escorted around MTSU.

After a PowerPoint presentation that informed them about scholarships, housing and other benefits of campus life, university personnel introduced the local high school students to the University Honors College, the photography program, journalism and strategic media, the James E. Walker Library’s Makerspace, the Keathley University Center and the Cason-Kennedy Nursing Building. 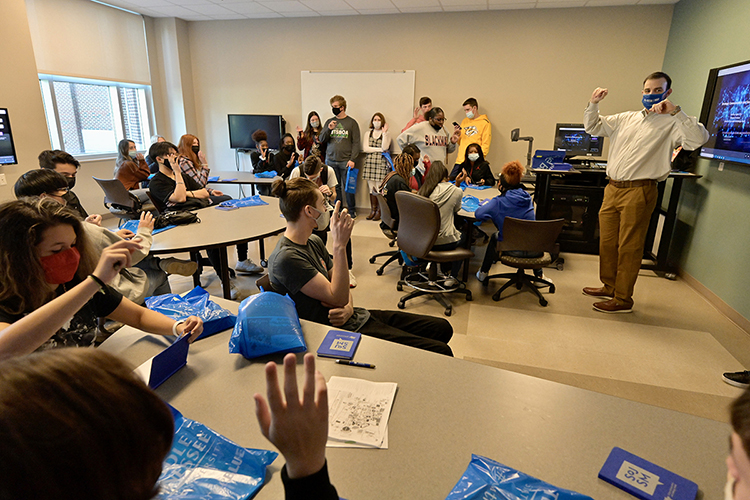 Matthew Taylor, an assistant professor of journalism and strategic media, engages an audience of Blackman Collegiate Academy students in a discussion of social media at the College of Education Building during the group’s Oct. 21 visit to MTSU. (MTSU photo by Andy Heidt) 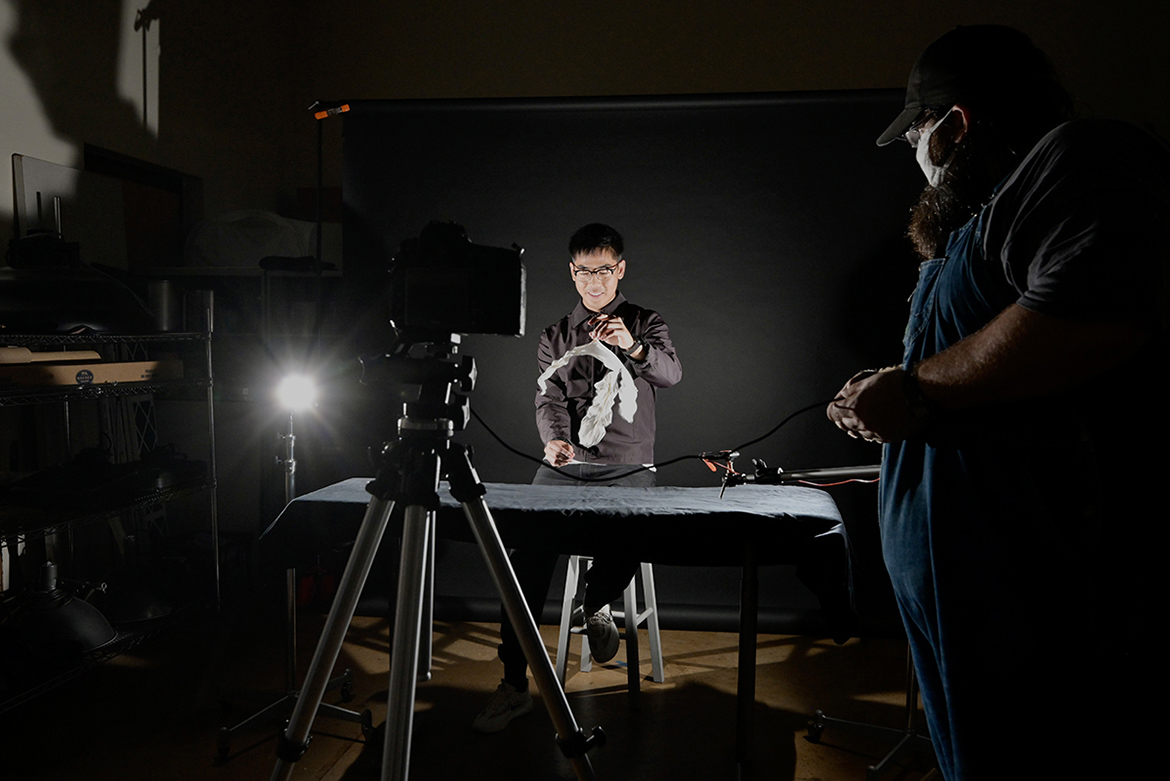 Zach Vongsiharath, a senior at Blackman Collegiate Academy, is photographed bursting a balloon during a visit to the photography facilities in the McFarland Building. Vongsiharath was part of a group of BCA students who toured MTSU Oct. 21. (MTSU photo by Andy Heidt)

One of the group’s escorts, Blackman High librarian Brian Seadorf, said it was important to expose the seniors to a college campus so that they will understand why it is not at all like secondary school.

“I try to spread the message that it’s not the 13th year of high school, and it is a completely different experience,” Seadorf said.

Launched in 2015 and a draw to high-achieving students, the Blackman Collegiate Academy includes a special partnership between MTSU and the high school that provides special campus visits to MTSU where BCA students get an up-close look at programs based on their academic interests. BCA also participates in MTSU’s dual enrollment program that allows eligible high school juniors and seniors to take up to six hours of university courses taught at Blackman by MTSU instructors at no cost. The credits will count on high school and college transcripts.

Seadorf, who has worked at Blackman for nine years, said many seniors change their minds about the direction their higher education will take after being exposed to the multiplicity of options an institution such as MTSU has to offer.

“A lot of them will think they know what they want to major in, and then, regardless of where they go, I would say three-fourths of them change their major within the first semester of college, which is part of the learning process, too,” Seadorf said. 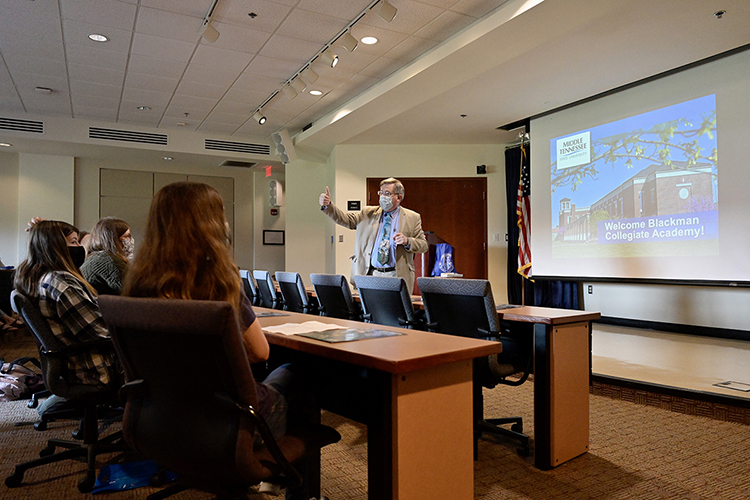 One student, A.J. Nelson, who is leaning toward studying molecular biology, said he had always wanted to go to a bigger college, but he said MTSU is becoming more attractive to him.

“It was really appealing to me,” Nelson said. “All the opportunities here, like the scholarships at MTSU, are an amazing thing.”

Gretchen Martin is considering majoring in political science in college. Nonetheless, she pronounced the Makerspace in Walker Library “super cool” after seeing a demonstration of 3D printing.

“I’ve learned a lot of different things, and I gotten to be exposed to new ideas and see everything that’s available to me if I come to school here,” Martin said.

Valerie Hackworth, assistant director of technology services for Walker Library, was as impressed with the BCA students as they were with the university.

“They’re bright,” Hackworth said. “They want to interact. They’re engaged. I don’t have to engage them. They’re already engaged, and that impresses me.” 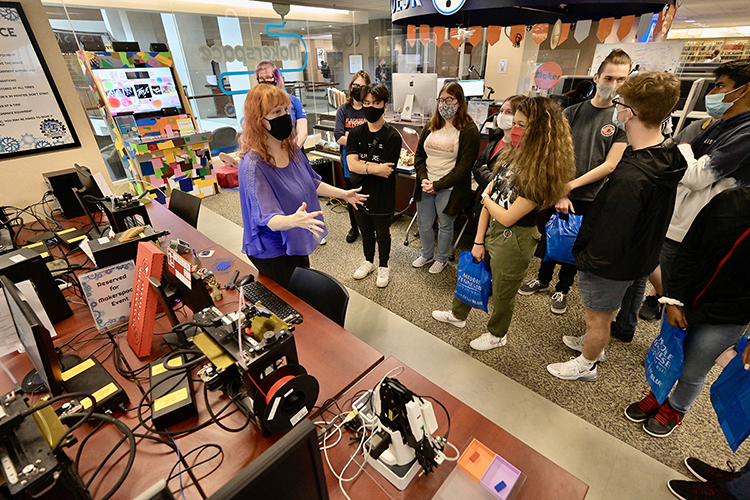 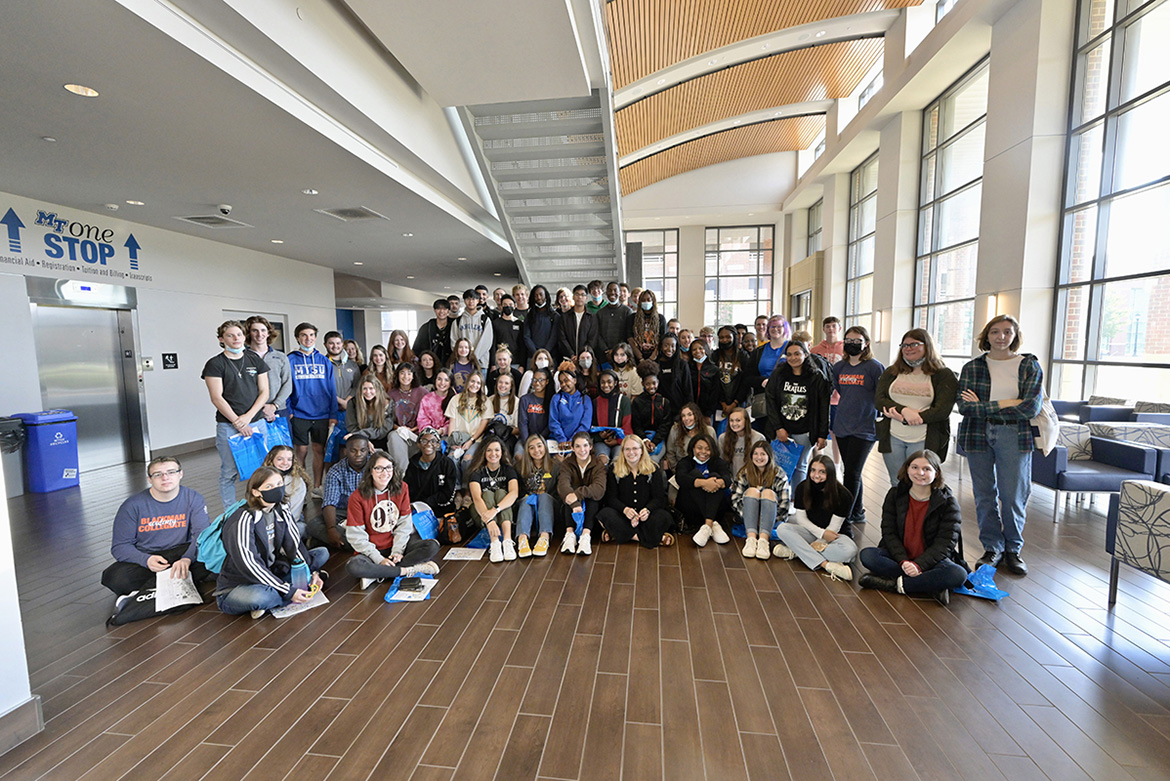 Some 70 students from Blackman Collegiate Academy pose for a group photo on the first floor of the MT One Stop during their Oct. 21 tour of MTSU. (MTSU photo by Andy Heidt)