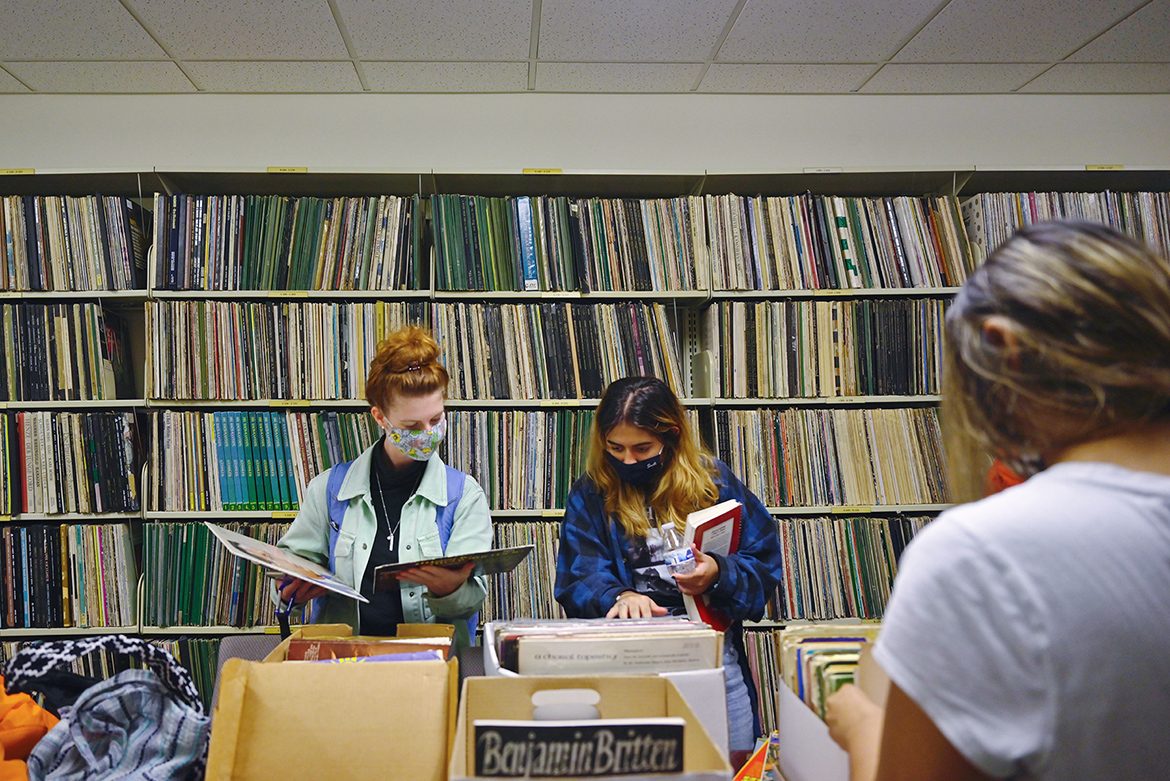 Walker Library Dean Kathleen Schmand and MTSU Provost Mark Byrnes cut a ribbon on the library’s second floor Oct. 21 to symbolize the library’s transition from the traditional Dewey Decimal System to the Library of Congress system of classifying library materials.

“It means that faculty coming from other institutions and students that are coming into the campus and using the collections will have a much easier time in finding the resources that they need,” Schmand said. 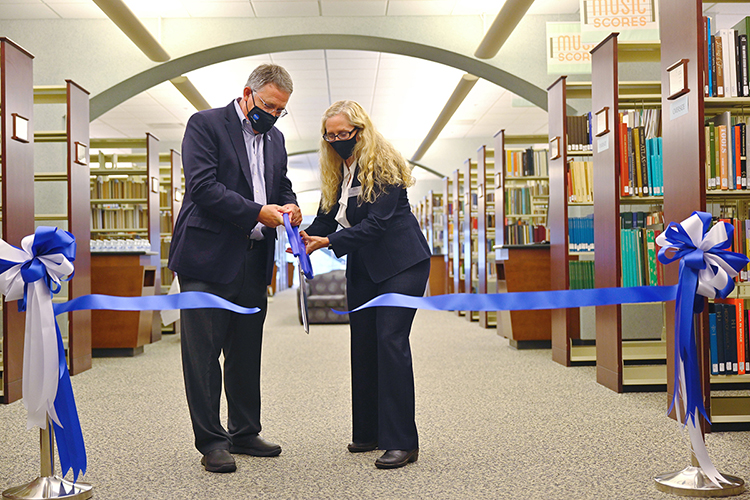 While the work continues, the staff can celebrate the culmination of a process that had been anticipated for decades and began in earnest in the summer of 2019.

“We brought in a consultant to look at the stacks to see how we could actually have two systems simultaneously until it’s all converted over,” said Susan Martin, the library’s chair of collection development and management.

Martin said library personnel weeded out old materials that weren’t being used much anymore to provide more room. They hired professional movers to assist with the actual physical relocation of some 564,000 books to the fourth and third floors, where faculty, staff and students reclassified them, placing new designations on the spines and entering them into the library’s computer system. 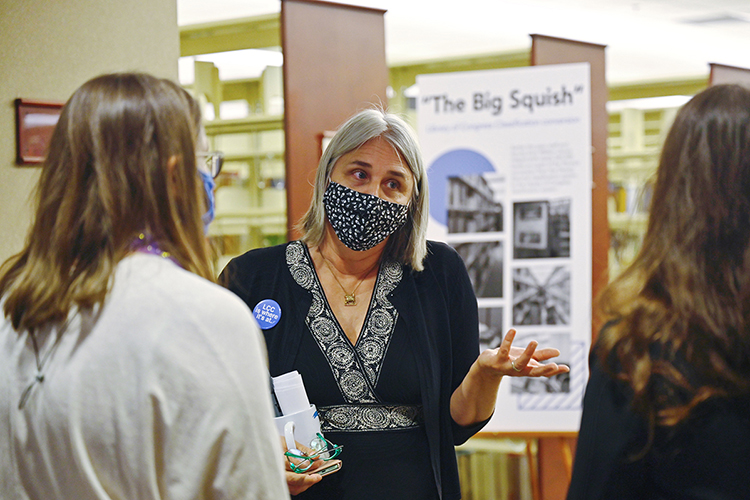 Susan Martin, chair of collection development and management for the James E. Walker Library, explains to MTSU students how the transition from the Dewey Decimal System of classification to the Library of Congress system will make finding library resources easier for them. (MTSU photo by Cat Curtis Murphy)

Whereas the Dewey Decimal System, which is used primarily in public libraries and K-12 school libraries, is number-based, the Library of Congress system is letter-based, Martin said.

“You’ve got a letter or two letters which will indicate the class and sub-class,” Martin said. “For example, ‘B’ is largely religion and philosophy, and then it breaks down beyond that. Like, ‘BD’ is a certain part of religion.”

From that point on, a number and a set of letters are used to arrange the books into a logical sequence by author and title, Martin said.

“It makes a lot of sense for us to be on a Library of Congress call number system in order to prep students as they go through their educational careers, as well as better support faculty,” Schmand said.

The library combined the event with a two-hour open house in which staff introduced students to the facility’s various resources.

To see a lineup of the Library of Congress classification outline, go to https://www.loc.gov/catdir/cpso/lcco/. For more information on the system’s implementation at Walker Library, contact Martin at susan.martin@mtsu.edu or call 615-898-2819. 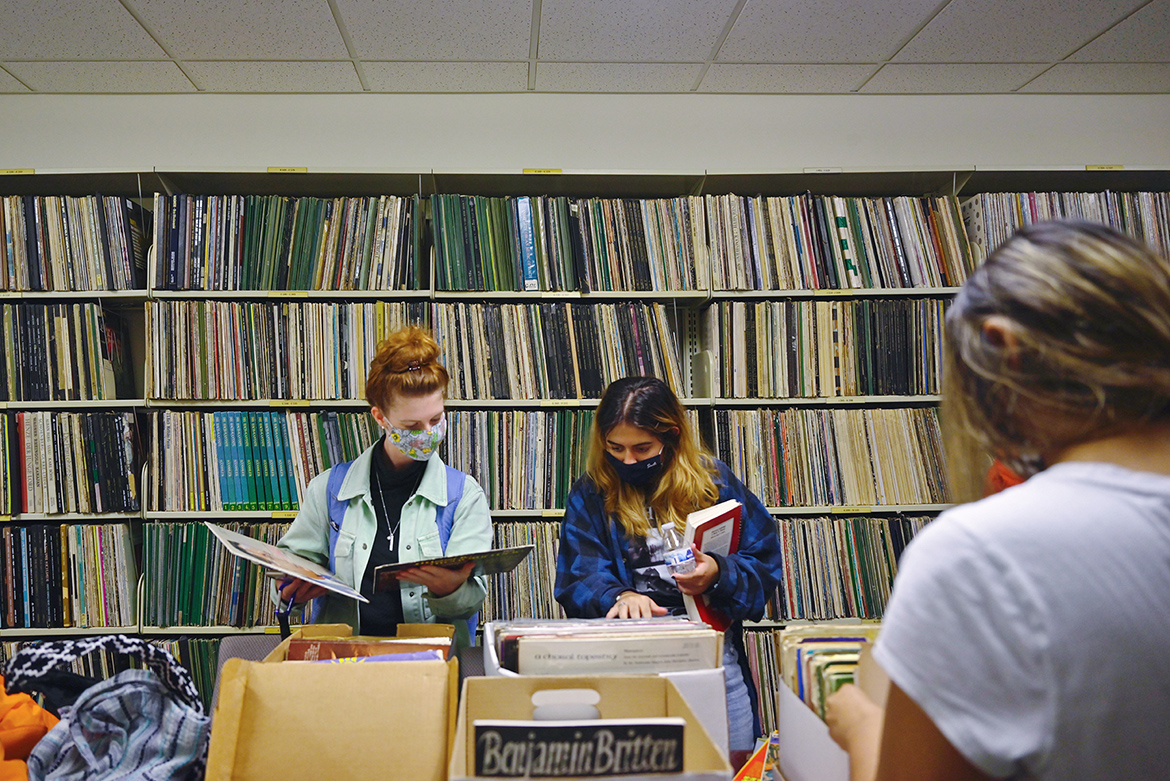 MTSU students looks through some of the resources inside the James E. Walker Library Thursday, Oct. 21, during an open house and ribbon cutting celebrating the library’s switch from the Dewey Decimal System of classification to the Library of Congress system, a move library officials say will make finding library resources easier for them. (MTSU photo by Cat Curtis Murphy)