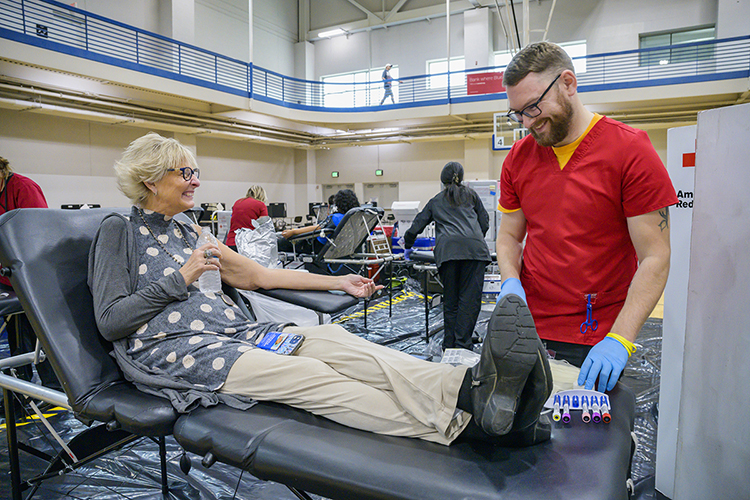 The rivalry returned, and now 831 blood donors around Murfreesboro, Tennessee, and Bowling Green, Kentucky, are back in their daily routines with their superhero capes barely visible.

Meanwhile, the recipients of their lifesaving blood, plasma and platelets — as many as 2,493 across the two states and around the country — are driving their cars, feeding their children, talking in their workplaces, and recuperating in their hospital beds, or soon will be, back in their own daily routines.

The friendly blood-drive rivalry between football foes Middle Tennessee State University and Western Kentucky University, which began in 2010, resumed this fall after the pandemic and scheduling issues waylaid Western in 2020 and 2021.

MTSU won the 2022 competition with its supporters donating 480 units of blood in an Oct. 3-5 “Bleed Blue, Beat WKU” campus blood drive. The WKU community collected 351 units of blood for its neighbors in a Sept. 26-28 drive.

The challenge trophy was presented Oct. 15 at Floyd Stadium during MTSU’s homecoming game against Western.

“As students at MTSU, we’re constantly reminded of our True Blue Pledge … that being ‘True Blue’ means we are recipients and givers. We take being ‘True Blue’ and being the Blue Raiders to heart, and it shows in our actions,” said Michai Mosby of Memphis, a sophomore public relations major at MTSU and chief of staff for the university’s Student Government Association.

“In our meetings, when I was talking about the blood drive, we had a senator who gave their personal story — she has needed blood transfusions, her sister has needed blood transfusions, and they have a rare blood type, and it’s through blood drives that they’re able to get the blood they need. That motivated other students to say, ‘OK, we see. We’ll help.’

“It was one thing for me to say, ‘Hey y’all, we need your help with the blood drive,’ and it was another thing for everyone to actually hear how it benefits (the recipients), how it actually works. That human interest played a big part.”

“Wow! What an amazing turnout for this event! We are so grateful to everyone who took their time to volunteer at the drive or rolled up their sleeve and gave lifesaving blood to others!” said blood drive committee chairman Ray Wiley, MTSU Campus Recreation associate director and a longtime American Red Cross volunteer and blood donor.

“This is a wonderful example of servant leadership and demonstrates how much we care for others. We can’t thank them enough! People have become more aware of how important giving blood is and how much they personally are truly needed to save lives. If they can’t donate, they volunteer to help the other donors.

“They really make a difference for us every year at this drive, and we’re honored that they choose MTSU’s drive to give.”

The annual blood drive, launched in 2010 by MTSU Director of Athletics and longtime blood donor Chris Massaro, has continued through both conference bye years and the pandemic.

The winner earns a challenge trophy, presented at each year’s MTSU-WKU game. MTSU has now won the contest, and trophy, eight times, with 2022 marking the fourth consecutive win; Western has won twice. There was no competition in 2013, when MTSU joined Conference USA, nor in 2020 or 2021.

The 2022 “Bleed Blue, Beat WKU” drive at MTSU brought the university’s total donations to 6,100 units of True Blue blood since 2010, potentially saving 18,300 neighbors’ lives — more than the population of Goodlettsville, Tennessee —across the region.

With the 2022 competition complete, MTSU and WKU supporters together have given a combined 11,202 units of blood since 2010, potentially helping 33,606 patients.

The Red Cross says up to three patients can use the components from one unit of blood. An average 150- to 180-pound adult has about 10 units, or 1.5 gallons, of blood; a newborn’s body has about one cup.