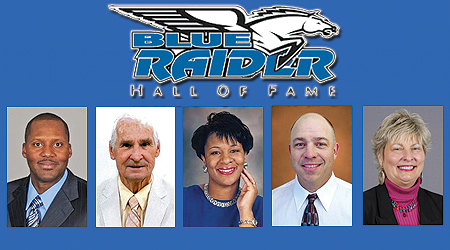 “Ecstatic” was the word that OVC baseball Player of the Year Jayhawk Owens used in describing his initial reaction to being chosen as one of the five members of the 2012 Blue Raider Athletic Hall of Fame class at Middle Tennessee.

Mike Caldwell, a bone-crushing linebacker for Coach Boots Donnelly, exclaimed that he was “excited.” Coach and administrator Diane Turnham recalled that she was “humbled and honored.” Harry Gupton, who excelled in both basketball and baseball, “couldn’t believe it, but I thought it was nice.” And Tawanya Mucker-Wilson, who scored in double figures in 60 consecutive basketball games, termed her reaction as both “excited and shocked.”

This quintet of standout Blue Raiders understands the significance of being selected in the Class of 2012. They will become the 118th-122nd members of the Hall of Fame since it was founded in 1976 and join an elite group who have made their marks on the athletic fields and courts of Middle Tennessee over a span of nearly 90 years.

The formal induction ceremony for the Class of 2012 will be held on Saturday, Sept. 8, at 3:30 p.m. at the Rose and Emmett Kennon Sports Hall of Fame on the MT campus. Later that evening, the Blue Raider football team will host Florida Atlantic in their Sun Belt Conference opener in Floyd Stadium.

Gupton, the senior member of the group, was a two-sport star from 1949 thru 1952. A native of Old Hickory, Tenn., and a graduate of DuPont High School, Gupton hitch-hiked to Murfreesboro because he wanted to play at Middle Tennessee.

In basketball, he became the second player to score 1,000 points in a career, breaking the scoring record of fellow Hall of Famer Charles “Fuzzy” Harmening, who was inducted in 2010.

Gupton earned 1,154 points in only three years, a mark that stood for three more years before another Hall of Famer, Ken Trickey, broke it. Trickey called Gupton “a terrific athlete, one of the best I ever played with.”

Gupton also was a standout shortstop in baseball and was drafted by the Cincinnati Reds and played in their system one year at the Triple-A level. He was drafted again in 1954, this time by the Army, where he served for two years in Korea.

He never went back to baseball, returning to MTSU to finish his graduate degree. Gupton became an elementary school principal for 30 years, and is now retired and living in Atlanta.

Turnham and Mucker-Wilson become the seventh and eighth women to be inducted into the Blue Raider Athletic Hall of Fame. Their Middle Tennessee careers intertwined, as Turnham was involved in both recruiting and coaching Mucker in basketball.

Turnham has gone on to make a career in women’s athletics at Middle Tennessee, coaching basketball as an assistant under three different head coaches — Larry Joe Inman, Jim Davis and Lewis Bevins. She spent 14 years as an assistant coach and helped take the team to the post-season eight of those years.

When Title IX was instituted, former Athletic Director Jimmy Earle named Turnham as the new volleyball coach, even though she had no experience in either playing or coaching the sport.

Building the program from scratch with a bare-bones budget, Turnham was the perfect choice to lead the Lady Raiders into the Title IX era. She coached volleyball for 10 years over a 13-year span, and her fondest memory is the last team she recruited and built going on to win the Ohio Valley Conference tournament and advancing to their first NCAA tournament the year after she retired.

“It showed just how far we had come, from nothing to championship level,” she said.

Athletic Director John Stanford gave Turnham her chance in administration and she has since risen to the level of Associate AD under Chris Masarro, also serving as interim AD on two occasions. She is associate athletic director and senior women’s administrator and also is now in her second year as chairman of the NCAA Women’s Volleyball Committee.

A native of Mt. Juliet, Turnham is a graduate of David Lipscomb. She is married to Kyle Turnham, and they have one son, Steven.

Mucker-Wilson was a standout high school player in Macon, Ga., and one of the top prospects in the nation when she was recruited by the Blue Raiders in 1986. She quickly lived up to her billing, making the All-Ohio Valley Conference freshman team as well as the league’s all-tournament team in her first year.

Mucker-Wilson earned All-OVC status in the regular season and tournament play in both her junior and senior years and was OVC Player of the Year in 1989. She led the team in rebounds and blocks for three years, finishing with 89 career blocks and finished her career at MTSU ranked No. 1 in made free throws; No. 2 in scoring, made field goals, field goal percentage and double-doubles; and No. 3 in rebounding, blocks and starts.

During her four years as a starter, the Blue Raiders won four OVC championships and two OVC tournament titles and posted an overall record of 83-32 and a dominating 47-7 mark in conference play. She played on two NCAA tournament teams, including MT’s first-ever NCAA win, a 78-77 OT thriller over host South Carolina in 1986.

Mucker-Wilson, whose incredible streak of 60 consecutive games scoring in double figures still stands, lives in Macon, is an instructional coach in education, facilitating teacher workshops in her 24th year in education. Mucker-Wilson has a 19-year old son, Jarred, and a daughter, Tiara, 14.

Mike Caldwell was an All-American linebacker who played for Boots Donnelly from 1989 to 1992 and was a part of three OVC championship teams at Middle Tennessee. A native of Oak Ridge, Tenn., Caldwell came to Middle Tennessee because of Donnelly and the other coaches, as well as the campus and the atmosphere.

He evolved from a skinny freshman to an Associated Press Third Team All-American his senior year, and was drafted in the third round of the NFL draft, the 83rd overall pick, by the Cleveland Browns.

1992 was Caldwell’s senior year and also his best. He made 76 tackles and scored three times, two on recovered fumbles and another on an intercepted pass, helping lead the Blue Raiders to a 10-3 record and the third OVC championship of his career. Overall, he made 248 tackles during his four years as a Blue Raider.

Caldwell also played baseball as an outfielder in his sophomore season but decided that football was a more likely career path. He’s played and coached in the NFL for 16 years — 11 as a player with Cleveland, Baltimore, Arizona, Philadelphia, Chicago and Carolina — and is currently in his fifth year of coaching for the Eagles.

Jayhawk Owens was the OVC’s Baseball Player of the Year in 1990, as well as earning All-OVC honors in both 1988 and 1990. He came to Middle Tennessee to play baseball, despite being drafted as a high-school senior by the Boston Red Sox in the second round.

Coach John Stanford recruited Owens from his home in Cincinnati, but he played for Coach Steve Peterson when he got to Middle Tennessee. He was an outfielder his freshman year, then moved to catcher, where he played the rest of his career.

Owens credits Peterson with preparing him for major league baseball, noting that Peterson recognized his lack of maturity and “taught me responsibility, not just baseball, but also things like doing what I knew was right, setting time aside to do my homework, things like that. ”

In a game like baseball, where everyone has a nickname, most people are surprised that Jayhawk is his real name. His father, who has Cherokee blood, is Claude Jayhawk Owens, and the new Hall of Famer’s full name is Claude Jayhawk Owens II. He has a son whose name is also Jayhawk, as well as a daughter named Grace.

Following his junior year as a Blue Raider, the Minnesota Twins made Owens the highest pick, at the time, in Middle Tennessee baseball history, taking him in the second round in 1990. He spent two years with the franchise.

The Colorado Rockies then took Owens in the 1992 expansion draft, and he spent four seasons with them, including three as the starting catcher, before he blew out his left thumb. He was traded to Cincinnati, but his power had declined because of the thumb injury “and I couldn’t put up the numbers anymore, so I retired after one season.”

Owens is now back in Colorado Springs and is in the construction business.