Beauty for Ashes, Strength for.. 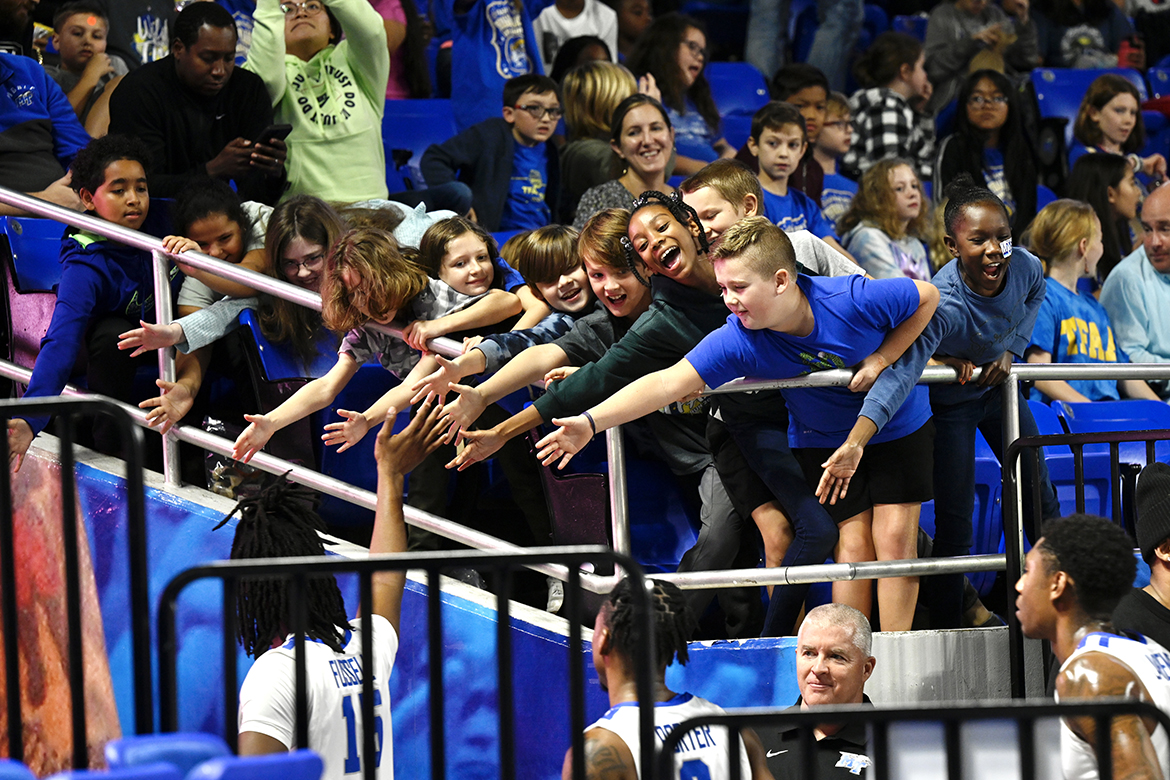 The fourth- and fifth-grade students turned the decibel levels on high — but it could have been louder Monday, Nov. 7, when the 4,700 students got wound up during the Middle Tennessee Blue Raiders 79-52 victory against the visiting Brescia Bearcats in the men’s basketball team’s annual Education Day game.

These events are a way for MTSU, the Blue Raiders and Lady Raiders to partner with Rutherford County Schools and Murfreesboro City Schools, bringing the youngsters to campus for a college basketball game and small sample of college life.

The youngsters stood much of the game, often twisting and gyrating when loud music  — including “Macarena” and “I Want Candy” played during timeouts — and screaming their lungs out when the Raiders scored.

The young man with the mic, MTSU senior finance major Weston Hargrove of Manchester, Tennessee, a student marketing coordinator in athletics, kept the youngsters revved up with his own on-court energy.

“(It’s) loud. I knew it would be loud, but I didn’t know it would be that loud,” Russell said just before the halftime break. “I’m very excited to be here and have been since our teacher told us in October were going to come to the game.”

Milton, who admitted she likes sports and has played basketball and soccer when she was younger, saw the interest rekindle while watching the tall players race up and down the court under the extremely loud conditions.

“It was fun watching the game and a good experience,” she said. “I am enjoying myself.” She admitted not being a fan of the noise, but “liked cheering and the MTSU Dance Team.”

“It was great having this many students come to campus,” said Massaro, feeling the excitement generated by the preteens. “You can see they are having a great time. We want them to have a great time and for the visit to be inspiring.”

Calling the environment “awesome,” Harris said he hopes the RCS students will also have an “opportunity to be exposed to fine arts and academic things” along with attending MTSU sporting events.

“This was a great atmosphere for our kids, but we don’t want this to be just about the athletic piece,” Harris added. “This can mean connections and relationships. I met my wife (Darlene) here. Our children, Chris and Danielle, went here, and she’s teaching in the school system.

“This is a great university. The facilities are good. They have a national reputation (in athletics and academics). It’s great from an economic (value) aspect.”

The MT Lady Raiders, who kicked off their season Monday night with a 76-75 loss to Mercer University in Macon Georgia, after two resounding exhibition victories in Murphy Center, will host Tennessee Tech at 11 a.m. Thursday, Dec. 1, in the Education Day game for Murfreesboro City Schools.

Students at the men’s game and those attending Dec. 1 will be given a voucher for them to attend a future game free, with the purchase of an accompanying adult ticket.