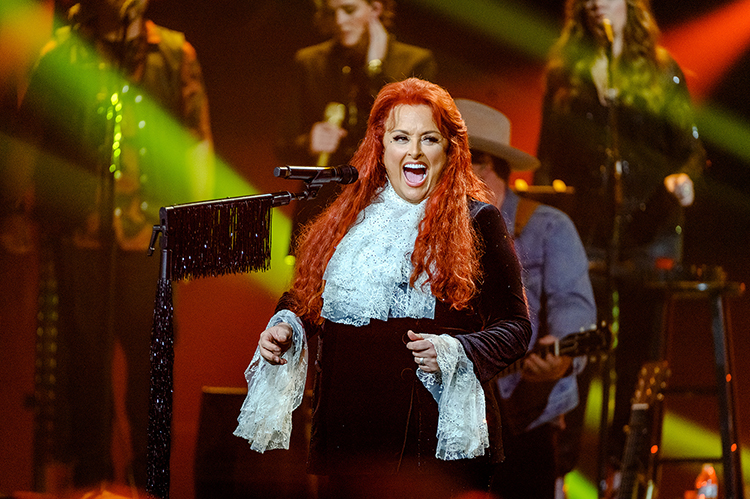 “The Judds: Love is Alive – The Final Concert” at MTSU’s Murphy Center was filled with True Blue full-circle moments — from headliner Wynonna Judd’s historic homecoming to the venue that recreated the 1991 farewell concert with her late mother to Blue Raider community members past and present working shoulder-to-shoulder to make the star-studded, made-for-TV event come together.

“This anniversary concert celebrating the Judds’ farewell concert here (in 1991) truly epitomizes the education MTSU’s College of Media and Entertainment provides our students,” Dean Beverly Keel said of the Nov. 3 event that involved over 50 student workers and a host of alumni behind the scenes.

“Our students have been here in the mix of everything,” Keel said. “Opportunities like this teach them so much, from emotional intelligence of how to react to people, how to handle problems, how to communicate effectively, to literal hands-on experience.”

Under the direction of media arts professor Bob Gordon, the students livestreamed student-fronted red-carpet coverage aired on True Blue TV via Roku, Apple TV and Amazon Fire; on News Channel 5+; and on the MTSU Facebook page.

“These students filled actual, real positions and roles at a level that would have otherwise been filled by professionals in the industry,” said Gordon. “Outside of me producing, the students ran everything else: direction, audio engineering, cameras, stage managing and more. This was the 66th multicamera production project these students have completed this semester.”

Sixteen more students worked as paid production assistants for CMT, one of the producers of the event along with Sandbox Productions, on the concert and its accompanying television special that will air in March 2023.

Wynonna Judd was joined in concert by her musical friends and current tourmates Ashley McBryde, Brandi Carlile, Kelsea Ballerini, Little Big Town and Martina McBride in a tribute to Naomi Judd, who died in April at her home in Leiper’s Fork near Franklin, Tennessee, at age 76.

Senior video and film production major Kayla Bradshaw, who worked as the stage manager on the red carpet, said working hands-on events like this is key to succeeding in the industry.

“It’s (a) big thing in broadcasting as a whole to have the ability to get your foot in the door and the opportunity to show what you know at events like this,” Bradshaw said.

One of Oppmann’s students, junior journalism major Addison Conley, plans to pursue a career writing about music and musicians.

“This (experience) is a good step to get to there,” Conley said.

These students worked alongside more than 20 MTSU alumni, including Nic Dugger, a 2018 grad who founded the mobile multicamera production company TNDV: Television LLC.

“What is unique is that CMT can hire anyone in the country they want,” Dugger said. “(And) MTSU alumni can be found at every turn. It is a massive success story for the College of Media and Entertainment.”

In front of the camera for the red carpet event, Middle Tennessee News, the School of Journalism and Strategic Media’s student-produced multimedia news outlet, supplied the student talent who interviewed musicians Little Big Town, Carlile and others, including MTSU President Sidney A. McPhee, like seasoned pros.

“This group of students has done a lot of rehearsals, a lot of research on the artists,” said Christine Eschenfelder, associate journalism professor and faculty news manager of Middle TN News.

“I’ve talked to them about the flow of the red carpet. There can be a lot of stress creating a live show, but it’s a great opportunity as a student to get to do this.”

Carly Sutton, a senior journalism major who worked the carpet as Middle TN News’ associate field producer, said it was the biggest event the group had ever covered.

“To have this opportunity is ridiculously amazing,” Sutton said. “Dr. E is doing her best to keep everything in line but also let go of her reins, so I can step in …. This group has done so much prep, and we’ve prepared backup plans (too).

“The way that this entire production is pretty much being run by MTSU students, as well as MTSU alums who are currently working for professional productions and have come back in order to work with us, is a uniquely MTSU experience.”

More journalism and strategic media students were on hand to cover the event for the student publication Sidelines and student radio station WMTS.

Kailee Shores, a sophomore journalism major and assistant editor of Sidelines, said she watched footage from the 1991 concert to calm her nerves and prepare.

“The idea was to familiarize myself on what was possibly going to happen and kind of watch for differences,” Shores said.

Kate Craighead, a senior media management major and WMTS general manager, captured audio clips of stars walking the carpet to use for a possible radio special or radio-station-ID intro clips.

“I watched a lot of the Judds’ interviews before today, especially from Wynonna after her mother’s passing … so it’s (hopefully) not as intimidating,” Craighead said. “It’s opportunities like this that really make it worthwhile and make you learn things and learn how to communicate with people and interview.”

Dean Keel, overhearing the conversation and herself a veteran music journalist, stepped in to offer support, saying that the key to the red carpet was keeping in mind that everyone was nervous.

“If you know that, it will make you feel a little more relaxed,” Keel said.

The young women agreed that it did.

Shores said industry experience and connections within MTSU’s College of Media and Entertainment, like Keel’s, are “absolutely incredible” and give students opportunities they could not find anywhere else.

“… Because she’s done that,” she said of Keel’s own red-carpet adventures. “That was her job for forever.”

Students even represented the university on stage: 45 choral students closed out the show, accompanying Judd for the finale of “Love Can Build a Bridge.”

The Judds concert also helped the university kick off the yearlong celebration of the 50th anniversary of Murphy Center, once the go-to venue for concerts in the Midstate and, thanks to almost $6 million in renovations, poised to again be an attractive venue for such events.