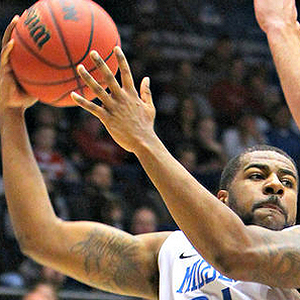 DAYTON, Ohio — In their first NCAA Championship appearance in 24 years, Middle Tennessee’s men fell 67-54 in the first round of the 2013 tournament Tuesday night to Saint Mary’s before a crowd of 12,027 at Dayton Arena.

The Blue Raiders, who are the regular season champions of the Sun Belt Conference, finished the year with a 28-6 record. They were making their seventh appearance in the NCAA tournament and first since 1989.

Marcos Knight led the Blue Raiders in double figures with 16 points, while Kerry Hammonds and Neiko Hunter added 10 each. Knight also added six assists and six rebounds to go with his 27th double-figure scoring game of the year.

Middle Tennessee was a No. 11 seed for this year’s NCAA tournament, matching the best seed in program history. MT was also the No. 11 seed in the 1982 Mideast Regional, the same year the Blue Raiders won their first NCAA tournament game against No. 6 seed Kentucky. The Blue Raiders captured a 50-44 win over the No. 6 Wildcats in Nashville, Tenn., before falling 81-56 to third-seeded Louisville in the second round.

As a team, the Blue Raiders struggled in shooting the basketball against Saint Mary’s, making just 22 of 52 attempts for a 42 percent effort, and had a hard time getting to the free throw line.

Saint Mary’s attempted 25 free throws to seven by the Blue Raiders. That marked the fewest attempts by Middle Tennessee all season, and the Raiders’ 54 points were their fewest since registering just 45 against Florida on Nov. 18.

After a back-and-forth first half, the Blue Raiders went cold from the field as Saint Mary’s ended the first stanza on an 11-2 run to take a 29-20 lead into the locker room. Middle Tennessee shot just 32 percent from the field, while the Gaels owned a 10-2 advantage in points off turnovers.

The Blue Raiders came out of the locker room a different team offensively. After trading baskets, MT went on a 7-0 run to trim the Gaels’ lead to 41-38 at the 12:36 mark. A Hammonds three-pointer keyed the run.

The Gaels answered right back, going on a 13-4 run to grab their biggest lead of the night, 54-42, with 5:48 to play. The Blue Raiders would not threaten again as the Gaels advanced to the second round to face Memphis.