Art alumnus Wayne White’s advice: ‘Do what you lov...

Art alumnus Wayne White’s advice: ‘Do what you love’ 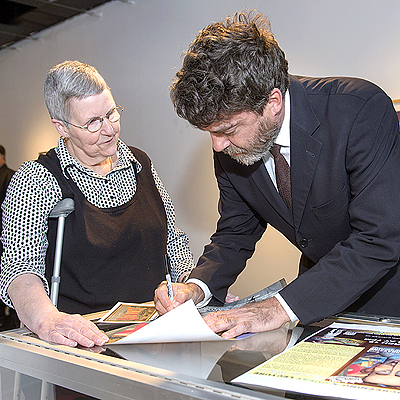 If artist Wayne White is ever in the market for a “third act” for his life, he might consider motivational speaking.

Maybe then, by encouraging even more people to focus on their dreams and to maintain strong friendships and family ties, White will get even more of the respect he so richly deserves.

MTSU art alumnus Wayne White, right, signs a poster advertising his March 19 visit to campus for Dr. Bonnie Rushlow, an associate professor in the Department of Art. The pair visited at a brief reception for White inside the Todd Art Gallery before a screening of “Beauty is Embarrassing” in the Keathley University Center Theater. (MTSU photo by J. Intintoli)

The MTSU alumnus repeatedly brought a full house in the Keathley University Center Theater to laughter and applause Tuesday night after — and during — a screening of the 2012 documentary about his life and work, “Beauty is Embarrassing.”

Dancing a jig in front of the screen as the credits rolled, White unexpectedly pulled his longtime friend, fellow alumnus P. Michael “Mike” Quinn, onstage for an audience Q-and-A session.

The pair, who met in an MTSU drawing class, did puppet shows at college parties and got their first serious creative jobs on a Nashville public TV children’s show. They’ve encouraged and supported each other’s creative exploits for the last 35 years.

The partners in puppetry exhorted the KUC crowd to “do what you love; it’s gonna lead you to where you want to go.”

“How do you resist the temptation to go for the straight-ahead life, though? I’m finding I can’t resist the allure of the white picket fence and the regular paycheck,” one earnest young man asked.

“I got the white picket fence AND the paycheck by following what I love,” White answered, just as earnestly, referring to his family and career in Los Angeles. “This documentary makes it look like it was easy, like I’ve solved all the problems and answered all the questions. I most certainly have not. But … you have to commit to what you want to do. Don’t hedge your bets.

Wayne White, right, plays the banjo while longtime friend and fellow MTSU alumnus Mike Quinn encourages him in this still photo from the documentary “Beauty is Embarrassing.” (photo courtesy of Future You Pictures)

“We both have always been open to what comes along,” added Quinn, who earned a master’s degree in biology, minored in art and blended both into a unique teaching career that led him to his current fine-arts post at The Webb School in Bell Buckle, Tenn.

One highlight so far has been working with his students to create a giant puppet of school founder William Robert “Old Sawney” Webb, with White’s help. (Watch a Webb School video of the result here. The project is also included in “Beauty is Embarrassing.”)

“I goof around and pretend I’m making art. I’ve done crazy things on stage, and my students say, “What is he doing?’” Quinn continued with a laugh. “You also make connections in school, in college, and you don’t know where they’ll lead.”

White, a native of Hixson, Tenn., who explains in the film that how MTSU connected him to friends and life-changing discoveries, agreed.

“Your fellow students are an important part of your education,” he said. “They’re the real treasure. You may learn more from them than from your teachers! You’ll never have this shared society of ideas again. Use it. Enjoy it. You’re a big influence on each other. We were.”

After graduating from MTSU, White moved to New York and worked as an illustrator for several publications, including the New York Times and the Village Voice. In 1986, he became a designer and puppeteer for “Pee-wee’s Playhouse,” earning three Emmy Awards in the process.

“He Acts All Weird for No Good Reason” is one of MTSU alumnus Wayne White’s text paintings. White was on campus March 19 to discuss and screen the documentary “Beauty is Embarrassing.” (photo courtesy of WayneWhiteArt.com)

He and his wife, artist and author Mimi Pond, then moved to California, where he continued his TV work with sets and characters for “Shining Time Station,” “Beakman’s World,” “Riders in the Sky” and “Bill & Willis.” He also worked with music videos, winning Billboard and MTV Music Video Awards as an art director for his work on The Smashing Pumpkins’ “Tonight, Tonight” and Peter Gabriel’s “Big Time.”

After a long struggle with the Hollywood hierarchy led White to work himself nearly to a frazzle to support his family, he embarked on a “second act” with the new century, creating paintings, sculptures and public works exhibited around the world.

White’s most recognized fine arts work now are his word paintings, which use thrift-shop-scavenged “sofa painting” landscapes as backdrops for detailed, deadpan 3-D words and phrases like “He Acts All Weird for No Good Reason,” “Awopbopalubop,” “Not All There” and “I Took Off Work and Came All The Way Down Here.”

“I consider them a form of poetry or a very, very short story,” White said with a grin. “They’re sorta my bread and butter right now. I want to keep turning them into sculpture, too.”

One of those word paintings, “Maybe Now I’ll Get The Respect I So Richly Deserve,” also lent its name to a 2009 400-page monograph of White’s work, edited by designer Todd Oldham.

The subsequent publicity and exposure helped to launch the documentary, which was directed by Neil Berkeley and premiered at the 2012 SXSW Film Festival.

White said he’d traveled all over the country as a result of “Beauty is Embarrassing,” often hearing “I didn’t know you did all that stuff!” from admirers who’ve seen the documentary.

“That’s every artist’s dream,” he said. “Actually, it’s everyone’s dream. It’s what everyone wants: to know that you had an impact on people somehow.”

White’s visit was sponsored by Raider Entertainment, the MTSU College of Liberal Arts and the Distinguished Lecture Committee. You can see more of White’s work at his website, www.waynewhiteart.com, and buy the “Beauty is Embarrassing” DVD there. White also plans an outdoor sculpture project at the Bonnaroo Music and Arts Festival June 13-16.