MTSU Board of Trustees gets update on strategic pa...

MTSU Board of Trustees gets update on strategic partnerships with industry

Middle Tennessee State University’s Board of Trustees was updated Tuesday, Dec. 10, on strategic partnerships providing real-world experience and career paths for students while also building a talent pipeline for and resource support from Midstate businesses and industry.

Joe Bales, vice president for university advancement, told trustees at their quarterly meeting at Miller Education Center that MTSU has built relationships with more than 70 companies over the past three years as private industry looks to forge closer partnerships with higher education. 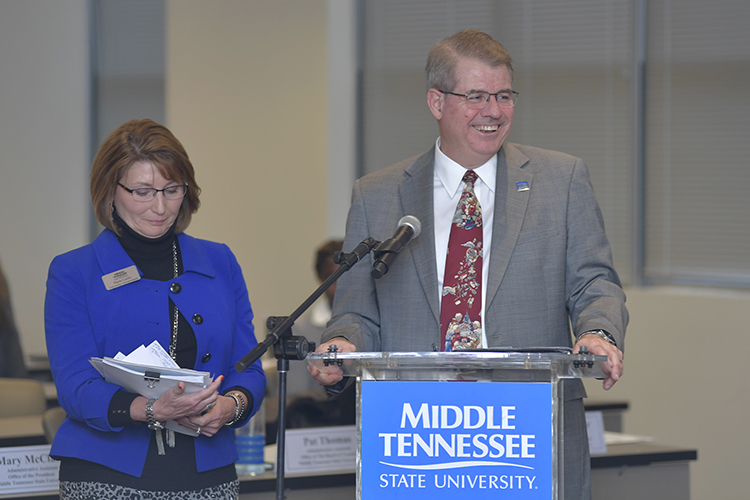 MTSU’s Joe Bales, right, vice president for university advancement, and Paula Leslie, director of partnerships and strategic planning, update the Board of Trustees on efforts to build strategic business and industry partnerships during the board’s quarterly meeting held Tuesday, Dec. 10, at the Miller Education Center. (MTSU photo by James Cessna)

“But we can’t be everything to everyone,” Bales said. “We have to strategically align ourselves with companies that offer the best fit with our programs and resources.”

Paula Leslie, MTSU’s director of partnerships and strategic planning, highlighted one such alliance with Nashville-based Asurion, which she said has hundreds of MTSU alumni working regionally within its ranks, including in executive positions, and is providing internship opportunities for students.

• The board approved a policy that sets out expectations for the conduct of coaches and athletics administrators in dealing with student-athletes.

• The board approved a plan to adjust salaries of employees whose pay is below 2014-15 College and University Professional Association market levels, effective January 2020.

• The board recognized MTSU’s football team for having the top graduation rate — 95% — in the NCAA for public universities and third in the country overall.

• President Sidney A. McPhee told trustees that the Tennessee Higher Education Commission has OK’d a new bachelor’s degree in data science that will launch next fall. 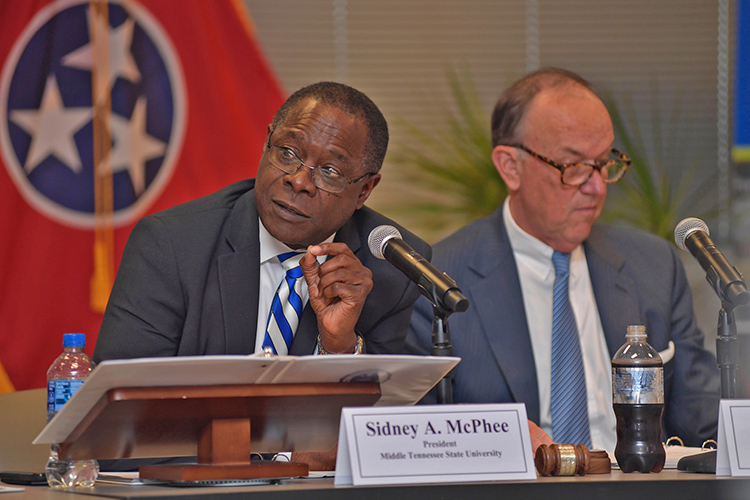 MTSU President Sidney A. McPhee makes a point about the university’s efforts to build strategic partnerships with business and industry during the university’s Board of Trustees meeting held Tuesday, Dec. 10, in Miller Education Center on Bell Street. At right is board Chairman Stephen Smith. (MTSU photo by James Cessna)