MTSU Board of Trustees gets up..

With novices and transfer students propelling the MTSU Debate Team, its coach is looking forward to a jam-packed spring 2020 semester.

Dr. Pat Richey, director of the debate program and an associate professor of communication studies, said his debaters will have to prepare for tournaments in Arkansas, Mississippi and Knoxville, as well as the state and national competitions.

The MTSU team’s friends and fellow debaters from Ireland also will celebrate their team’s 40th anniversary with a return trip to Murfreesboro for another spirited contest. 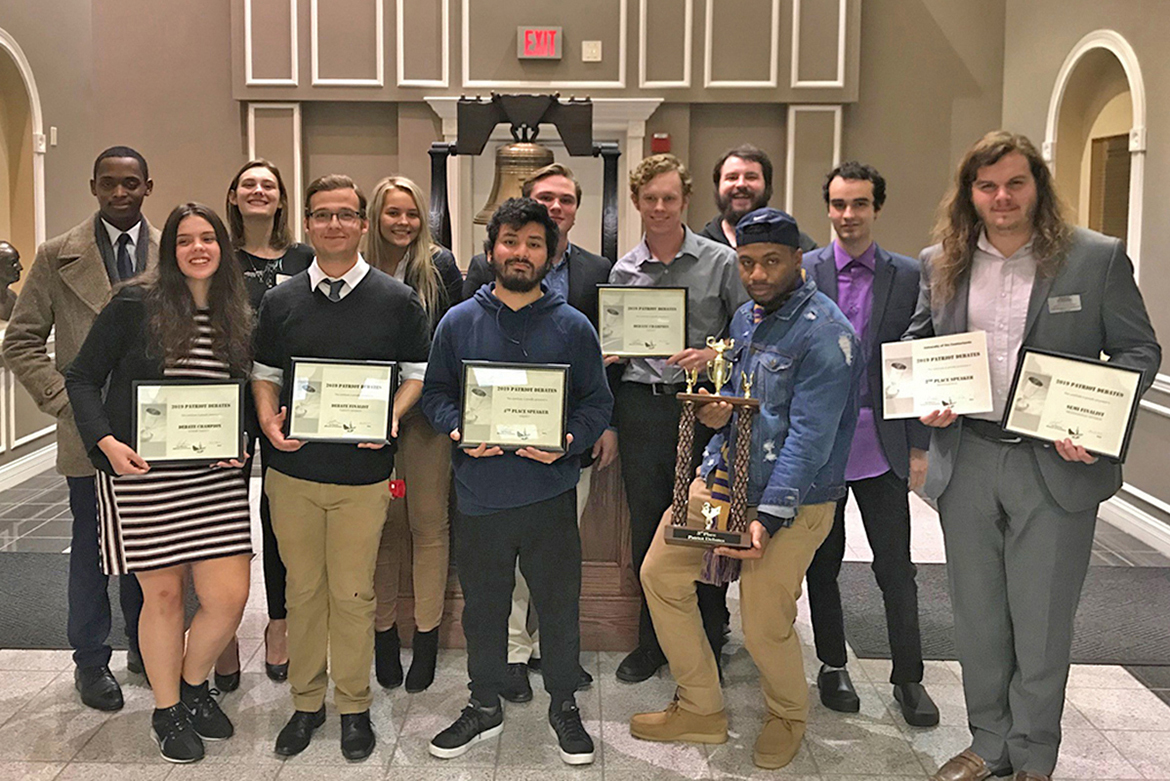 The MTSU Debate Team celebrates its win in the Junior Varsity Division at the University of the Cumberlands tournament, which took place Nov. 8-9 in Williamsburg, Kentucky. Pictured from left on the front row are Anastasia Ortiz, Graham Christophel, Carlos Powell, Kaelon Cage and Christopher Cowherd. From left on the back row are Winton Cooper, Hannah Rowland, Haley Bobo, Luke Arnold, Levi Jaeger, alumnus Joshua Hendricks, and Collin Dyer. (Photo submitted)

At the final tourney of the fall semester, MTSU won the junior varsity division at the University of the Cumberlands in Williamsburg, Kentucky, capping what Richey said was a good fall 2019 semester.

“I was pleasantly surprised because the team is very young,” Richey said. “We brought in several transfers who have debate experience, but it takes time for people to meld and get to know each other and function as a team.”

One of those transfers is Johnny Locke, a junior communications major from Talbot, Tennessee, who was on the Walters State Community College debate team for three semesters.

“I would be remiss if I didn’t mention the camaraderie I have meeting people from not only my own college, but other colleges and universities, relationships that I’ll probably maintain for my life,” Locke said.

MTSU’s own tournament, which was held on campus Nov. 1-2, was a massive undertaking with 63 competing teams representing seven states.

“The best schools in the nation came and duked it out,” Richey said. “It wasn’t an easy tournament. They fought for it.”

“It’s really neat to see a community college do that,” Richey said. “Every two years, they have to get new debaters.”

To level the playing field on his home turf, Richey entered only novices in the MTSU tournament, adhering to the Monticello Pledge, a voluntary agreement among some debate coaches.

“You don’t flood your own tournament with your own people and win your own awards, because that’s unethical,” Richey said. 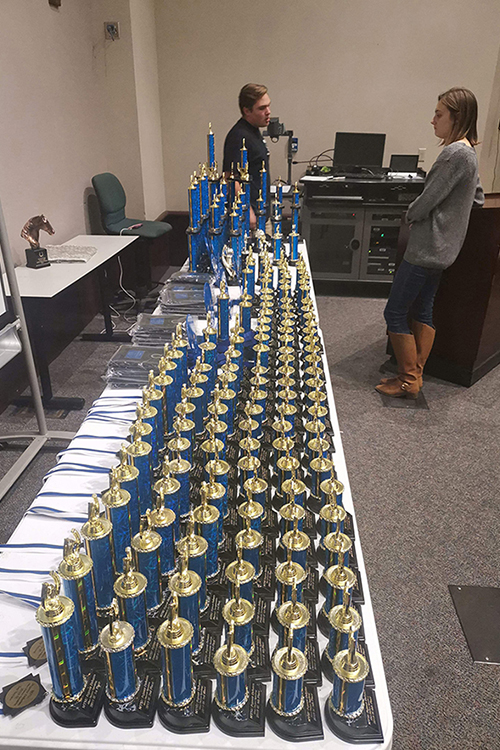 An array of awards awaited successful debaters at MTSU’s 2019 debate tournament, which was held on campus Nov. 1-2. (Photo submitted)

Debaters come from a variety of colleges and disciplines, from Liberal Arts to Media and Entertainment to Basic and Applied Sciences. For Richey and his debaters, the rewards of competing in debate go far beyond collecting trophies or certificates of achievement.

“Mostly, my ability to communicate has been improved a lot,” Locke said. “I have learned a lot about politics, current events, how to really articulate what I feel about a topic or someone. I’ve really learned how to have polite discourse with people when there’s a disagreement and conflict resolution and de-escalation.”

Many of Richey’s debaters are in his Communication 3210 class, an experiential learning course which requires students to either participate in a debate and write a paper reflecting on the experience or watch several debates and write a more long-form paper about that.

“What they learned in class is what they took with them to the debate tournament,” Richey said.

For more information about the MTSU debate program, go to www.mtsu.edu/debate or contact Richey at 615-898-2275 or patrick.richey@mtsu.edu.