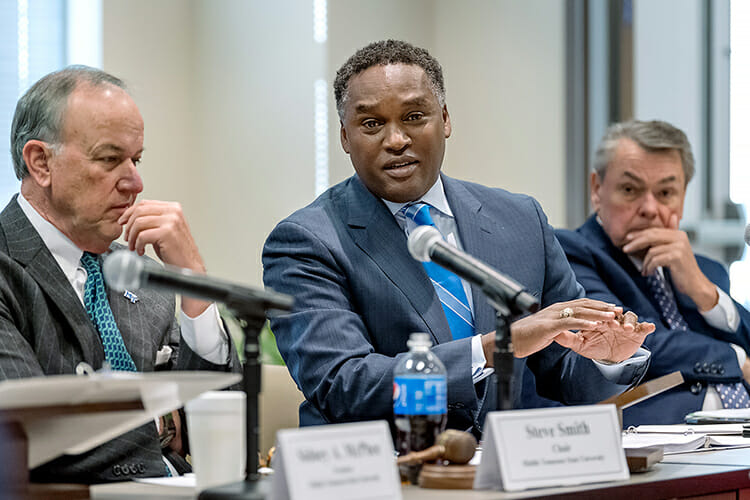 Middle Tennessee State University’s Board of Trustees voted Tuesday, Dec. 11, to dramatically expand its Regional Scholars Program, which reduces tuition for select potential out-of-state students, to include all eligible residents in states that border Tennessee.

The board also extended a five-year employment contract to President Sidney A. McPhee, endorsed proposals for two new academic degree programs and confirmed the selection for a faculty Chair of Excellence.

The Regional Scholars Program, which reduces MTSU’s out-of-state tuition by almost 50 percent for qualified students, now extends to those who live anywhere within states that touch Tennessee’s border. It had been restricted to those living within a 250-mile radius of Murfreesboro.

The expansion takes effect for new and returning students starting in the 2019 fall semester. Students must maintain full-time enrollment status, which is 12 credit hours and above for undergraduates and 10 hours and above for graduate students, to remain eligible.

Undergraduate and graduate applicants who have an ACT composite of 25 and above and are from Alabama, Arkansas, Georgia, Kentucky, Mississippi, Missouri, North Carolina and Virginia would be eligible for the program. Applicants from other states touched by the previous 250-mile radius, including parts of Indiana, Illinois, Ohio and South Carolina, will continue to be eligible.

“We will not cease in our continued efforts to move MTSU forward,” McPhee said during the board’s quarterly meeting inside the Miller Education Center. “This expansion provides even more opportunities for talented nearby students to attend our great university.” 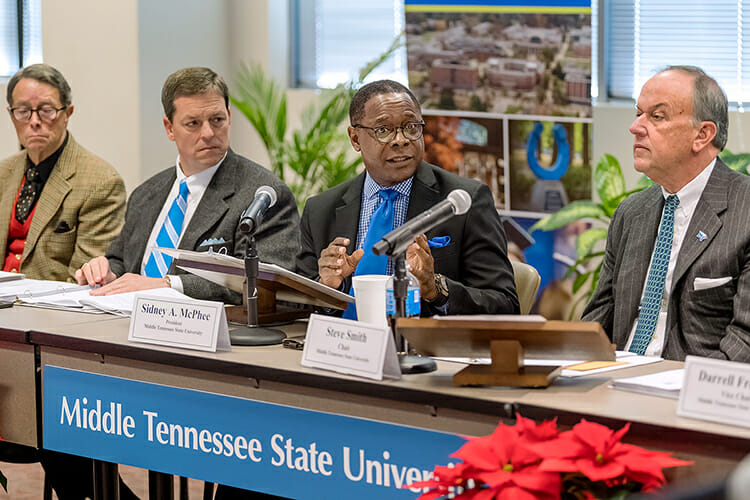 MTSU President Sidney A. McPhee, center right, updates the university’s Board of Trustees Tuesday, Dec. 11, during its quarterly meeting inside the Miller Education Center on Bell Street. From left are trustees Andy Adams and Pete DeLay, and at right is board Chairman Steve Smith. The board approved a five-year contract for McPhee. (MTSU photo by J. Intintoli)

The changes mean that out-of-state incoming freshmen included in the Regional Scholars Program who applied before Dec. 1 and have a high school GPA of 3.5 or higher would be eligible for MTSU’s recently expanded Presidential Scholarship. The $18,000 guaranteed award is paid out at $4,500 a year for four years. Go to www.mtsu.edu/apply for more information.

The Regional Scholars Program is the second incentive offered by MTSU to out-of-state students who live near Tennessee. The university is also a member of the Academic Common Market, which allows residents of participating states to qualify for in-state tuition for unique academic majors not offered in their home state.

The Academic Common Market is open to potential students in Alabama, Arkansas, Delaware, Georgia, Kentucky, Louisiana, Maryland, Mississippi, Oklahoma, South Carolina, Texas, Virginia and West Virginia. It is limited in Florida and Texas to graduate students. You can find more information at www.mtsu.edu/acm.

In other actions Tuesday, the board:

For more information about the MTSU Board of Trustees, go to www.mtsu.edu/boardoftrustees. 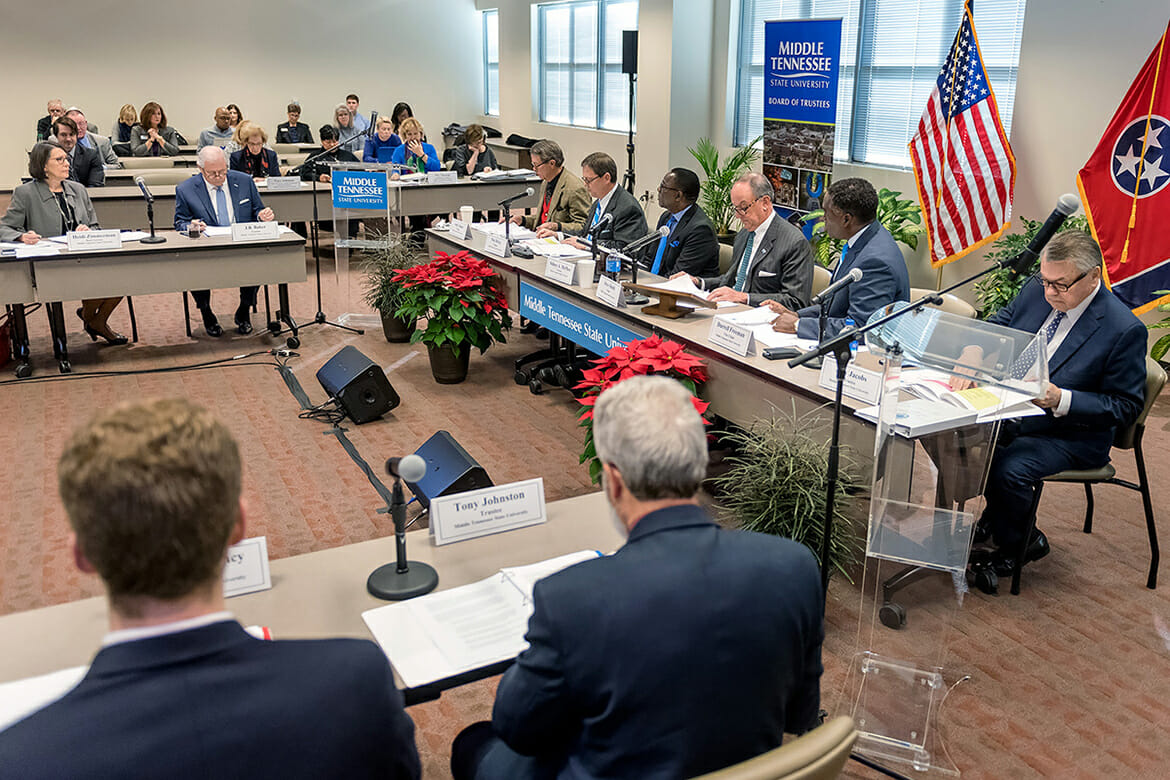 Members of the MTSU Board of Trustees go through their agenda during the Tuesday, Dec. 11, quarterly meeting inside the Miller Education Center on Bell Street. (MTSU photo by J. Intintoli)