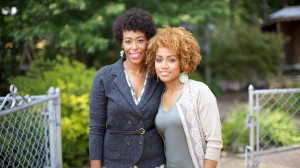 According to the Centers for Disease Control, 80% of African-American women are overweight. Former Blue Raiders Toni Carey (’05) and Ashley Hicks (’05) are trying to do something to improve those frightening statistics.

In 2009, Carey (pictured at left) and Hicks (right) created Black Girls RUN! (www.blackgirlsrun.com). Their mission is to encourage African-American women to make fitness and healthy living a priority, thereby lowering the number of women with chronic diseases like diabetes and heart disease associated with an unhealthy diet and sedentary lifestyle.

The two co-founders of BGR! are past roommates and AKA sorority sisters at MTSU. Hicks was
chapter president while Carey was treasurer – meaning the pair worked on many projects together during their college years. That synergy was revived when Hicks – a former PBS documentary maker, recent Columbia University graduate and current nonprofit marketing manager based in Atlanta, formed BGR! with Carey, currently a publicist based in Virginia Beach, Virginia.

Hicks says after graduation from MTSU, her own lifestyle became more sedentary – a common problem in today’s workforce. Before long, the former MTSU soccer player had gained weight. “I’d always been athletic and an athlete, but that changed after college,” she says. “So I started running. That’s my personal story.”

GBR!, which started as a blog filled with information about running, nutrition and health, is now a coalition of almost 60 running groups across the U.S. representing an incredible 25,000 women (see http://www.blackgirlsrun.com/running-groups/). Many of those members have started running in half or full marathons, or starting with 5K races. “It makes us feel good about what we’re doing,” Hicks says.

One particularly feel-good moment for Hicks occurred at a recent marathon in New Orleans where 130 BGR! members from across America traveled to that city to run with Carey and Hicks.

“It was an incredible experience,” Hicks says. “Just to meet and greet all these women who got involved.” 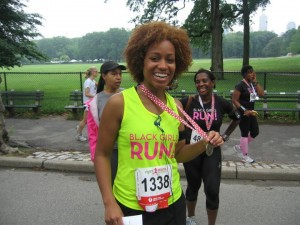 What lies ahead? Hicks says she hopes to grow BGR!’s membership base to 50,000 by this time next year. Together with Carey, the two social entreprenuers have also launched a nonprofit branded merchandise line (www.blackgirlsrun.bigcartel.com) that they hope will enable BGR! to keep running as a completely free enterprise (most such running groups across the nation charge fees.)

Other goals are to expand the program to teenage girls, as well as to cultivate running groups in the so-called “Stroke Belt” – the deep South – where obesity in African American female populations is particularly acute and where BGR! running groups haven’t yet proliferated.

“We’re really hoping to get into those areas and get people running,” Hicks says.

It all adds up to an impressive startup for a grassroots operation with its roots at MTSU.