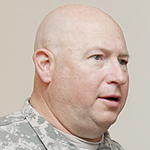 The event was held in MTSU’s University Honors College Amphitheater.

“Leadership is a subject we deal with all the time in the military,” said Haston, a Warren County native now living in Knoxville with his wife, Anne. Their son, Travis, is an MTSU senior in the College of Mass Communication.

“Leadership is when you get people to do what you want them to do,” the alumnus noted, adding that leading men and women in his line of work is especially challenging “when they potentially know they could lose their life.”

“Leadership is more than holding a position,” Haston continued. “You have to learn, and you have to earn their respect.”

“This has been extremely beneficial,” she said. “I have been learning a lot of varied perspectives and how to approach leadership in different ways. Since I’m just starting here and want to be involved in organizations, the skills I’ve learned today, hopefully, will help me in those endeavors.”

Haston offered the attending students a “Be/Know/Do” philosophy about leadership. He urged them to:

•  “Be aware of your mission and your mission in life. Be a leader. Step on out there. Once you get the mission, don’t overcomplicate it. You have to articulate and communicate what you want folks to do.

• “Be a good listener. It’s very hard to be a good listener and be a good leader. Folks with a type-A personality may be listening, but they may be waiting to talk. Be a Charlie (referring to the Tennessee Farm Bureau’s wise advertising character).

• “Be passionate for what you do. If you do not have passion, you need to go on to another career. Find something you love to do and go do it. … I have a passion for what I do; the men and women (I work with) love to do what they do every day.”

Haston then told his audience to “know about your job and what it involves. Learn your people and their skills and abilities. … A lot of people reach lofty places, and it’s hard for them to look down and tell others what to do. … Know the next phase, and always be thinking about the next day and the next event.”

In the “Do” phase, Haston urged students to “give reasons and challenges and not just talks. Our young men and women today are better, faster, stronger and quicker than any previous generation. They think broader and think globally. … Be real. People who respect you can spot a phony. I tell young commanders to leave the unit better than you found it. That’s a true sign of a leader.”

Haston concluded by telling the students they “attend one of the best universities in the nation.”

Other MTSU staff and faculty members discussing leadership qualities during the inaugural event included Dusty Doddridge of the MTSU Career Development Center; Heather Arrington of the University College Advising Center; Jackie Victory of the MTSU Office of Leadership and Service; Dr. Deana Raffo of the Department of Management and Marketing; Dr. David Foote of the Jennings A. Jones College of Business and MTSU Institute of Leadership Excellence; and William Respress of the MTSU Department of Human Resource Services.

Watch a brief video of Haston’s lecture below.