TV sports journalism is in the.. 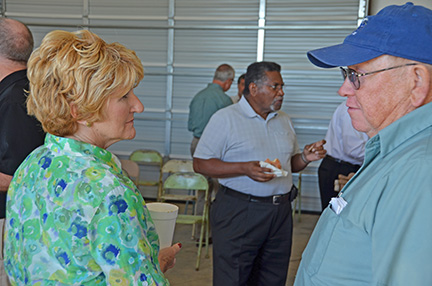 Rising with the roosters, members of the Murfreesboro business community spent part of their workday at MTSU Farm.

As invited guests July 17 of the MTSU School of Agribusiness and Agriscience Experiential Learning and Research Laboratory, about 30 members of the Murfreesboro Breakfast Rotary Club and others experienced the agricultural side of the Middle Tennessee State University campus.

Not only did they have sausage biscuits compliments of Batey Farms, orange juice and chocolate mile from the nearby MTSU Dairy, they received a tour of the facility and learned what the future holds for the property located about 6 miles east of campus in Lascassas, Tennessee.

“This was an extremely informative meeting, to learn about the amazing programs that MTSU offers,” said club member Lori Williams, who serves as comptroller for the Murfreesboro Electric Department.

Rotary Club member Faye Johnson, assistant to the MTSU provost for special initiatives, said “everybody loved it” and many members were not aware MTSU had a farm.

School of Agribusiness and Agriscience Director Warren Gill and farm lab Director Matthew Wade shared the virtues of the farm and the MTSU students who are learning quality work ethic that should bode well for their careers after graduation.

“We are very pleased the Murfreesboro morning Rotary Club came and visited the farm,” said Gill. “They seemed to be very interested in trying some of the products that either our students or alumni produce. They had a good time learning all they could about the MTSU Farms.”

Alumnus John L. Batey of Murfreesboro and owner of Batey Farms, an eight-generation family farm in the Blackman Community, provided the sausage. MTSU students grew the tomatoes, which also were available for consumption.

MTSU sophomore Brandon Taylor attended the event. He serves as president of the MTSU Rotaract Club and was invited by professor Lara Daniel, Rotaract adviser and Rotary Club member. Taylor is majoring in finance with an emphasis in insurance. Rotaract, or Rotary in Action, is the Rotary-sponsored service, leadership and community service organization for members between the ages of 18 to 30.

The Rotary Club’s motto is “Service Above Self.” The Murfreesboro Breakfast club normally meets at 6:45 a.m. on Thursdays at Stones River Country Club. To learn more about the club, visit http://portal.clubrunner.ca/5997.

To learn more about the School of Agribusiness and Agriscience, visit http://www.mtsu.edu/abas/.