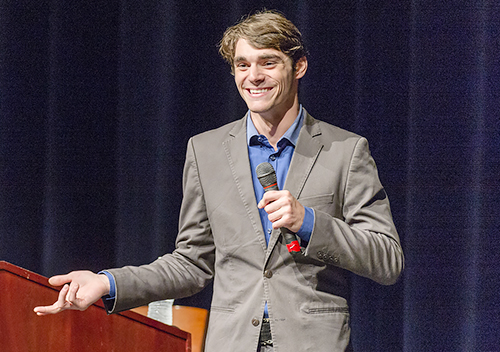 One of the stars of TV’s “Breaking Bad” offered an evening of uplifting advice in a conversation with fans at MTSU.

The event was sponsored by MTSU’s Diversity and Access Center as part of a weeklong observance of National Disability Awareness Month.

“We hope that message will spread across campus so more students will grow comfortable with disability and approach our office to learn more about disability culture and/or to register with us.”

Much of Mitte’s advice to the audience pertained to authenticity, individuality and refusing to allow others to impose labels.

“Make sure they’re seeing you, not what they’re trying to make you,” he said.

Mitte described a grueling childhood regimen of speech therapy, leg braces and counseling sessions at Shriners Hospital in Shreveport, Louisiana, a five-hour drive from his Lafayette, Louisiana, home. However, Mitte said his family and friends were available for him all the way.

“I never knew I was different until I went to school and someone said, ‘What’s wrong with your feet?,’” Mitte said.

Learning how to deal with bullies became a big obstacle, but Mitte persevered.

“You can’t let doubt control your emotions,” he said.

The 27-year-old actor said he was cast for his role on “Breaking Bad” because he had cerebral palsy. His character, the son of a chemistry teacher who makes and sells illegal methamphetamine to pay for his cancer treatments, has a more severe form of the condition.

Ironically, said Mitte, his first acting job was for a public service announcement about the dangers of methamphetamine.

Mitte also discussed his activism for the disabled as the youth spokesman for the National Disability Institute’s Real Economic Impact Tour, as well as his advocacy for the disabled with the Screen Actors Guild/American Federation of Television and Radio Artists, also known as SAG/AFTRA, the National Center for Bullying Prevention and Actors’ Equity.

He said he doesn’t really have a problem with nondisabled actors playing disabled characters.

“I hate to tell you this, but we’re all disabled in some way, really,” Mitte said with a chuckle.

Mitte, whose other credits include “Switched at Birth” and “Hannah Montana,” referred to acting as a “very no-oriented business” when discussing the many rejections actors get when auditioning for work.

“Playing other characters is the only thing I like about this business,” said Mitte. “Money burns and fame is fickle.”

For more information about the MTSU Disability and Access Center, call 615-898-2783 or go to www.mtsu.edu/dac.