Click on this exhibit poster to see a larger version.

“John Hendrix: Drawing by Heart” and “Crosshatch Illustration Show 2014” are on display through Thursday, Oct. 23, in the Todd Art Gallery in the heart of the MTSU campus.

Both are presented by MTSU Arts.

Hendrix’s exhibit is in the main gallery of the facility, while the Crosshatch student exhibit is in Room 210, also known as TAG|210.

Hendrix, an assistant professor at Washington University in St. Louis where he teaches illustration and typography, earned bachelor’s and master’s degrees in fine arts. While living in New York, he worked at The New York Times as assistant art director of its Op-Ed page for several years and taught at Parsons School of Design.

He published his first picture book, “Abe Lincoln Crosses a Creek,” in 2008, receiving recognition from the American Library Association as a “Notable Book” and the Comstock Award for read-aloud books.

“John Brown: His Fight for Freedom,” which he wrote and illustrated, won the Oppenheim Toy Portfolio Gold Seal and was named one of the “Best Books of 2009” by Publisher’s Weekly. His 2012 book, “A Boy Called Dickens” was described as “touching and believable” by The New York Times, and his latest book is “Shooting at the Stars: The Christmas Truce of 1914.”

In addition to illustrating book jackets by many other authors, Hendrix’s work has appeared in dozens of magazines, including Sports Illustrated, Entertainment Weekly, Rolling Stone, Time and Field & Stream.

His images also have been part of advertising campaigns for ESPN/ABC, AT&T and Travelocity and annual award publications for groups like AIGA, the professional association for design, and the Society of Illustrators.

The Crosshatch student show at the Todd Gallery features a mix of works that include hand lettering, icon design and spot illustrations with applications that showcase printed interactive pieces, editorial and book design, branding, package design and print design.

“The purpose in organizing this event is to showcase the department’s largest segment of declared majors,” said Art Department Chair Jean Nagy.

John McFarland, president of the MTSU student chapter of AIGA, described the exhibit as “a free salon-style show displaying illustrative mixed media projects that students have done here at MTSU.”

McFarland noted that the student exhibit is an effort to “coincide with the main gallery presentation of illustrative work” by Hendrix.

All Todd Art Gallery exhibits and receptions are free and open to the public. The Todd Gallery is open from 8:30 a.m. to 4:30 p.m. Monday through Friday and is closed on weekends and state and university holidays.

For more information about MTSU Arts, which presents a full slate of art, theatre and music offerings at the university each year, visit www.mtsuarts.com.

For more information about MTSU’s Todd Art Gallery, including parking and directions, contact gallery director Eric Snyder at 615-898-5653 or eric.snyder@mtsu.edu or visit www.mtsu.edu/art. You also can find a campus parking map at http://tinyurl.com/MTSUParking14-15. 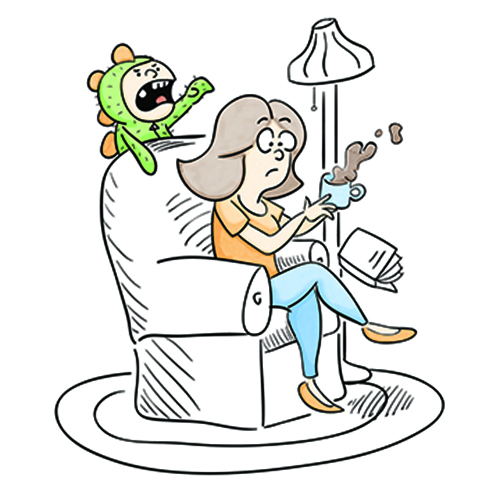 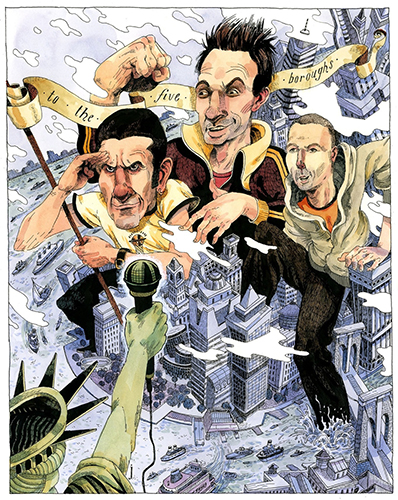 Artist John Hendrix created this illustration of the Beastie Boys for a 2004 story in Rolling Stone magazine. An exhibit of Hendrix’s work is set Oct. 7-23 at MTSU’s Todd Art Gallery. 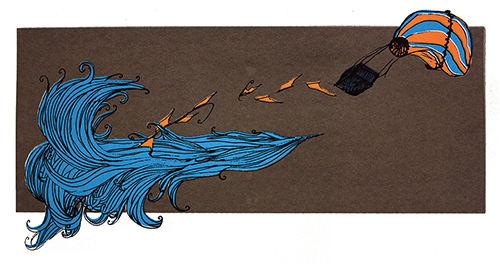 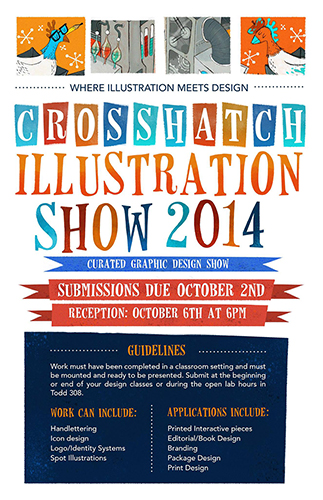