Board of Trustees endorses 2nd.. 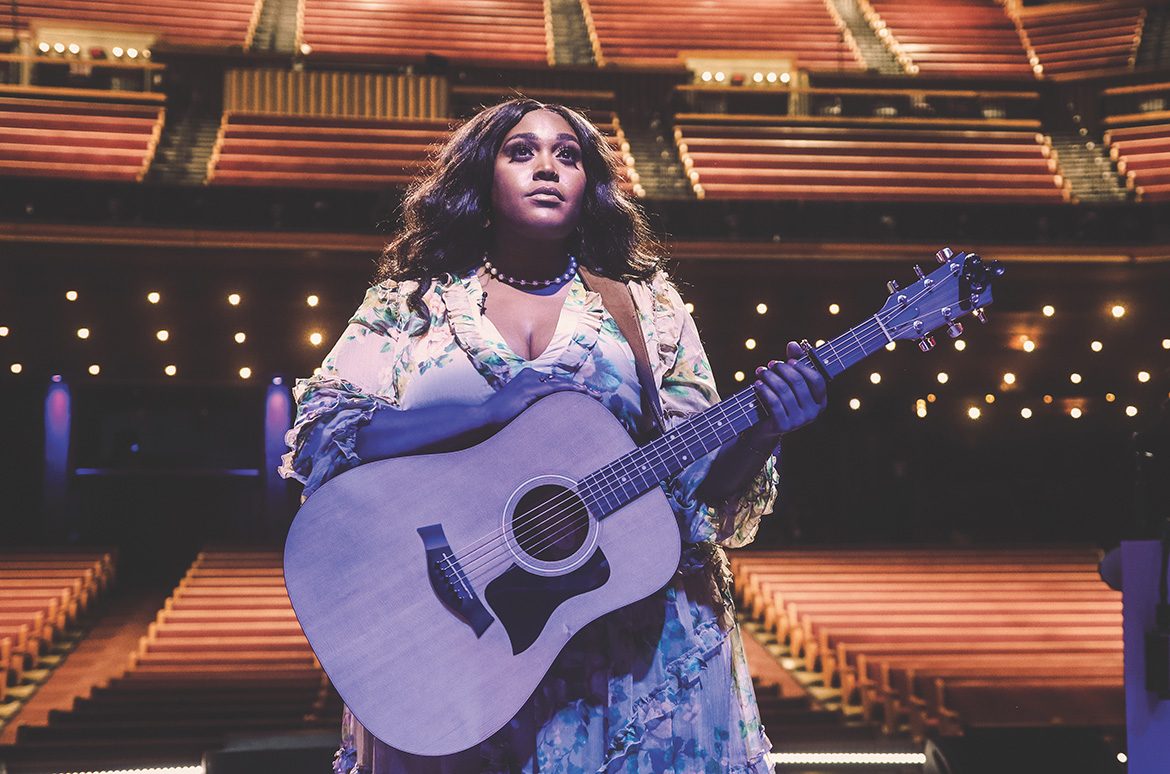 When MTSU alumna Brittney Spencer relocated to Nashville to build a career as a mainstream country music artist and songwriter, she knew the mountain she’d have to scale would be formidable. After all, the genre is dominated by white, male megastars and a seemingly endless supply of soundalikes.

A recent study suggests only about 30% of songs played on terrestrial and satellite country radio stations are performed by female artists. Being Black exponentially compounds Spencer’s aspirations given that, historically speaking, few Black artists have found success in country music.

Spencer knows her path to success is largely uncharted. But talent, confidence, and determination have a way of shrinking mountains. Spencer knows that, too. 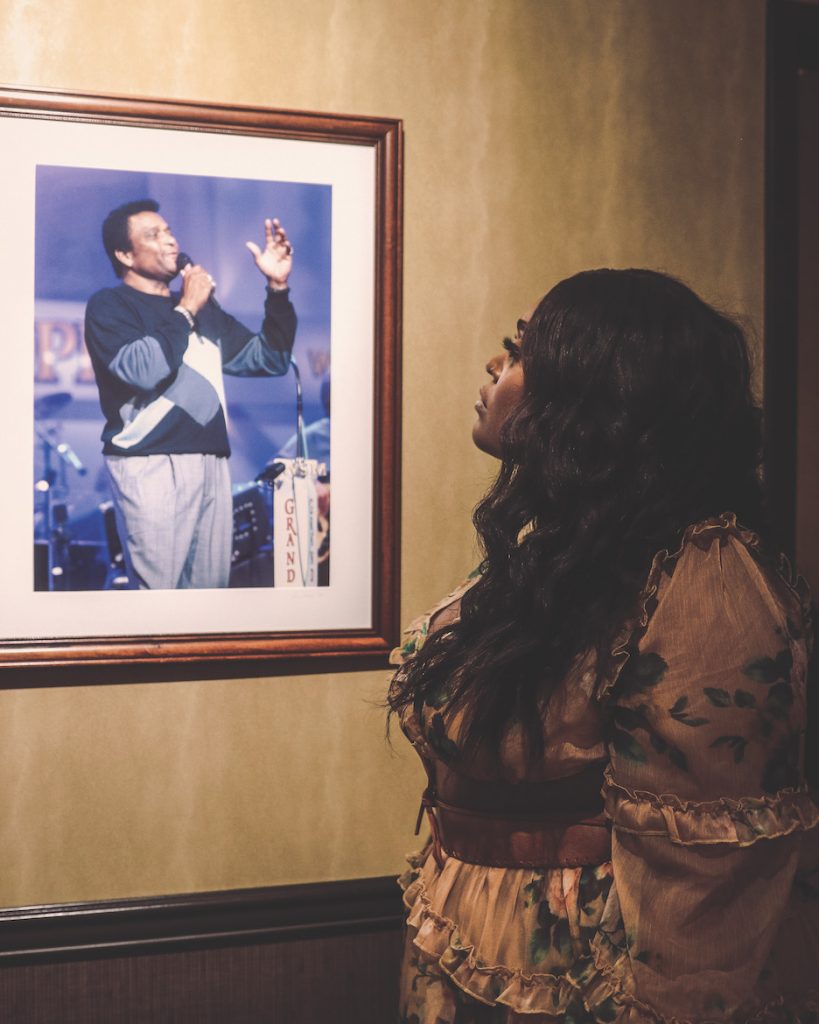 Brittney Spencer reflects on a portrait of the late Charley Pride. (Top photo and above photo courtesy of Anthony Stone)

Hitting the Streets
Spencer started singing gospel in her hometown of Baltimore, then became a backup singer for several notable artists, including Carrie Underwood and Christopher Cross. When she moved to Nashville in 2013, she wasted no time.

“I saturated myself in the Nashville scene when I got here. I wanted
to learn more about the industry to go with the creative component,” Spencer said. “When I moved to Nashville, I attended writing workshops during the day and busked downtown at night.”

She sang for tips on the sidewalks in the heart of Nashville’s high-energy tourist district.

“I busked at a yellow shack by the Tequila Cowboy and also over near Printers Alley. I can’t think of any more organic way to connect with people than playing on the street. But I was just so nervous,” Spencer said.

“I had only recently learned to play guitar [by watching how-to videos on YouTube], and a friend suggested I play downtown. Busking makes me feel connected to people—myself included. I met all kinds of people when I was busking.”

She was absorbing important lessons about the music business, too.

“While I was singing, I was also doing a lot of market research. I wanted to see what made people stop and listen to me, or what made people tip me $10 instead of $2. So I would play Miranda [Lambert] or Michael Jackson and see what the reaction would be. It gave me a good feeling of what people wanted to hear,” she said.

“At Printers Alley, there was a hotdog stand and a taco truck, so I established relationships with vendors, which was a nice business partnership for us both. Their customers would listen to me as they waited in line and when they ate the food. Honestly, that helped inform my decision to go to MTSU.”

Spencer already had two years’ worth of credits under her belt from attending community college in Maryland.

“I realized I wanted to further my education,” she said. “I knew I wanted to go back to school, and a friend told me about MTSU. So I visited campus and learned about what it offered. I just loved it.”

As one might expect, Spencer resumed her academic career in MTSU’s acclaimed Recording Industry program. But then she concluded that what she needed most from MTSU were tools to brand and market herself as she prepared to continue her expedition. 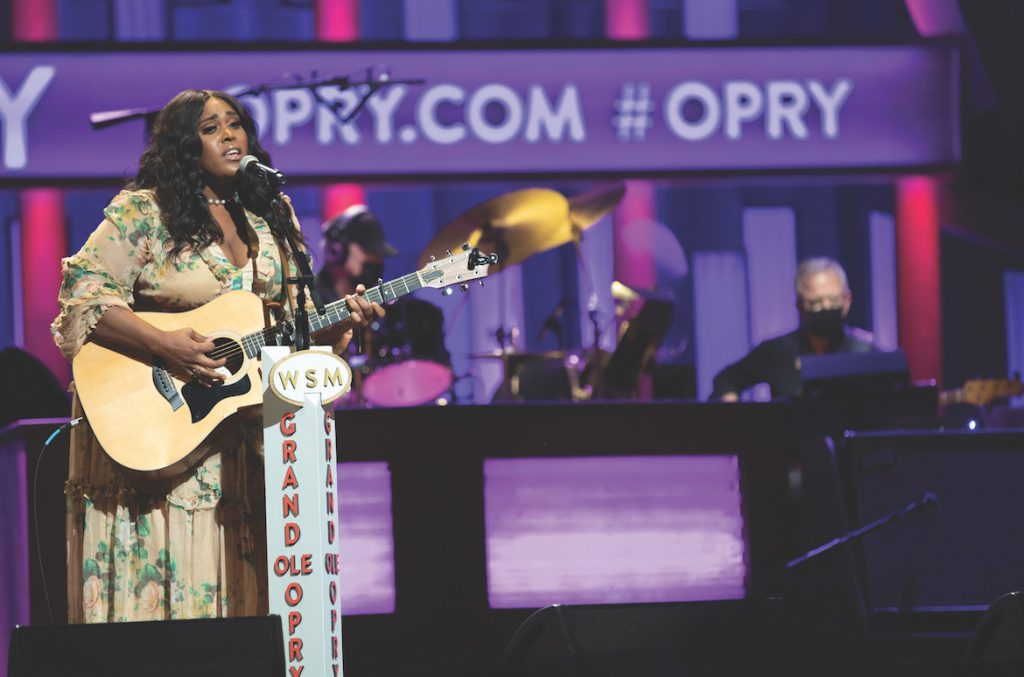 During her time at MTSU, Spencer focused on classwork, networking, honing her talents, learning the music business, and deejaying at WMOT, MTSU’s NPR-affiliated public radio station.

“I took full advantage of my time at MTSU. When I was there, I wasn’t a part of organizations, but I found ways to connect to them. I was part of things but not tied to things,” she said. “No one cares about your songwriting degree if you can’t write a song or sing. So I was there to get the most out of meeting people and being a songwriter. The Recording Industry program sent me to Germany for a songwriting session in the summer of 2015, and I stayed there for a week. It was wonderful.”

But Spencer simultaneously kept a foot in Nashville, too, with the same strategic goals: meet people, learn the business, hone her talents. 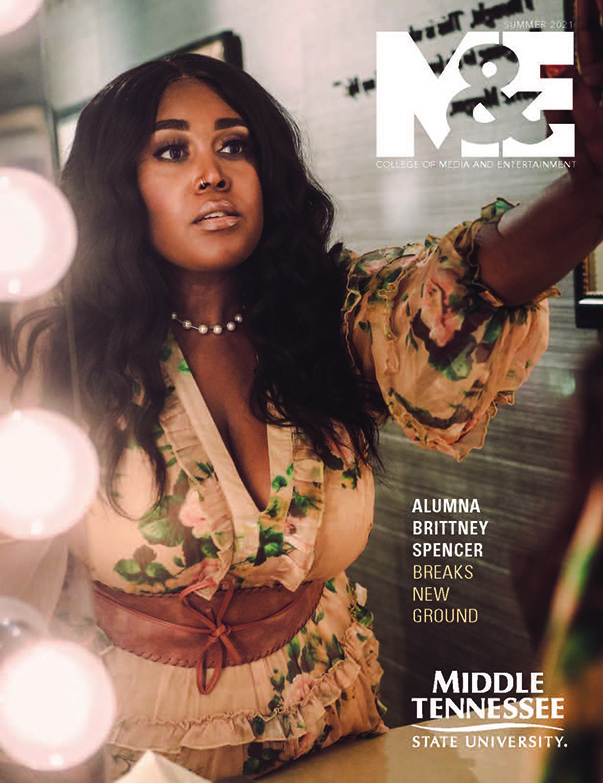 While at MTSU, she also would attend seminars hosted “by Nashville Songwriters Association International, Grammy U, and any other U that was out there,” Spencer said. “I did all that stuff. I did panels, songwriting-in-the-rounds. Any opportunity to participate, I was there. I did SoundCheck at Grammy U, where if you responded to their email fast enough, you could get on the list to go to a sound check at the Ryman and talk to the artists.”

Busy as she was, she also took time to tend to the betterment of the business itself.

“I did advocacy work with the Grammys,” Spencer said. “We met with legislators and talked to them about the benefits of caring about songwriters, and presenting bills to Congress. This was a big part of my agenda as a student and as an artist.”

“In a crazy industry, she’s always been levelheaded and very together,” Keel said. “She’s not affected by the glamour of the industry—she’s focused on making great music. She was so clear that she wanted a career as a singer-songwriter in country music, and that’s just what she’s doing.”

Since graduating MTSU in 2017, Spencer has made steady progress up the mountain, progress made more difficult by her race. Those who have heard her music know her talent is deep.

Count among her fans Maren Morris and Shires of the Highwaywomen. Last fall during the COVID-19 pandemic, when Spencer, a social media maestro, tweeted a clip of herself singing the all-female supergroup’s song “Crowded Table,” Morris and Shires did more than click “like”—they each tweeted their applause along with an invitation.

“This is beautiful, Highwaywoman. Someday, we will play again—and when we do, we’d be honored if you’d come sing this with us,” Shires tweeted. “Brilliant. Come sing with us,” echoed Morris.

By all accounts, Spencer is a legitimate contender for airtime on country radio stations. And, in a shift from the long-established pattern, the industry dominated by white performers seems to be embracing her. Social media—simultaneously a stage, a megaphone, and a launching pad—seems to be a powerful equalizer for talented independent artists, regardless of race.

In general, I think the story of Black artistry in country music is finally accelerating” said Craig Havighurst, co-host of Music City Roots, a weekly live-performance radio show that airs on WMOT, “and fostering real cultural change against too many headwinds and too much industry inertia. 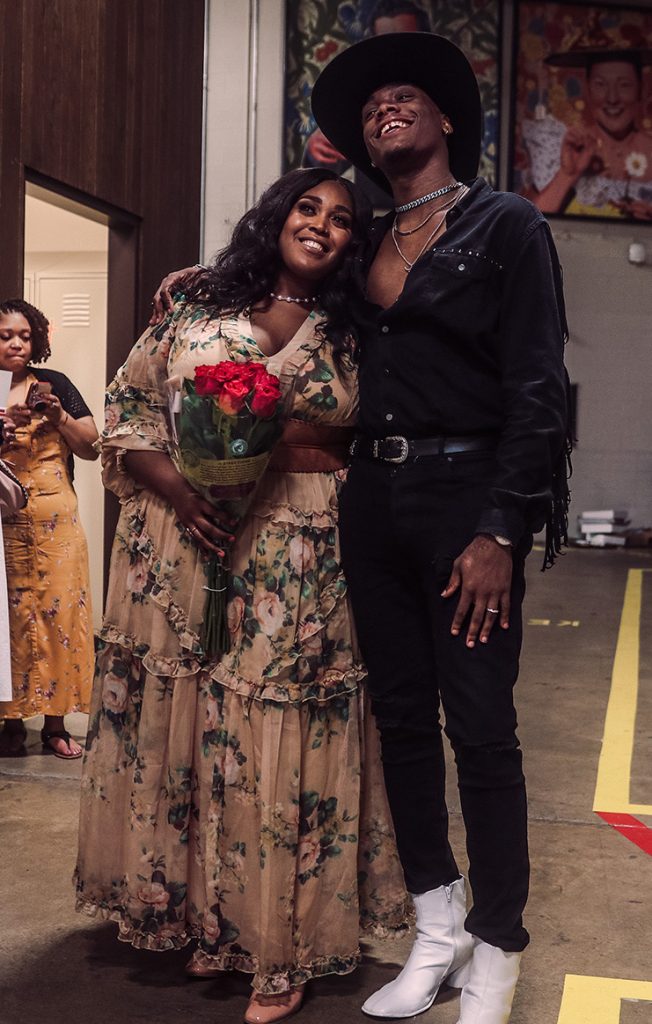 “So many grand singers and songwriters are stepping up to insist on their place in the scene, and so many fans and allies are demanding those voices be heard and promoted in country music, that this overdue shift and consciousness is finally a real, dynamic thing.

“I’m thrilled by the traction and the excitement around Yola, Amythyst Kiah, Kyshona—and I want more people to hear Wendy Moten, too. And there are other great Black voices, of course. What I’d emphasize, though, is that this is only becoming possible in country because, at last, streaming and playlisting is challenging formatted radio’s longstanding monopoly on exposure and artist development,” Havighurst continued. “Country radio has been biased against almost everything for a couple decades—variety, diversity, storytelling, women—and it’s had no incentive to change on its own. But now an artist like Brittney can get on the Indigo Spotify playlist and has a shot at being heard widely.”

Spencer describes the changes in the genre as an “opportunity” and a “renaissance.”

“The push for inclusivity in the genre has forced the industry to, at the very least, acknowledge that it’s a real issue,” Spencer said. “Continual demand from fans and critics alike presents an opportunity for the industry to take chances and extend access in ways it historically hasn’t. This renaissance happening in country music is one of hope and innovation.”

If the powers that be within the country music industry open the door to inclusivity, will the fans—who are largely white and skew conservative—follow? There’s reason to wonder. After all, when a video surfaced in February of country music star Morgan Wallen using the N-word, his record sales skyrocketed immediately thereafter.

Spencer pays no mind to that question; the answer likely wouldn’t change her game plan one iota.

Keel says this perspective is an asset, not a liability.

There is a buzz about her up and down Music Row,” Keel said. “She has a strong sense of self, and she is bold and brave.

“She’s taken a stand on issues of social justice at a time many new artists might not do anything to stand out. Her strong sense of self prevents her from being something that she’s not. One listen, you can see that she’s an artist who is already creating a lasting legacy. Those who know her know that she is inspiring other young, up-and-coming female songwriters—especially African American female songwriters—to follow their dreams, too.” 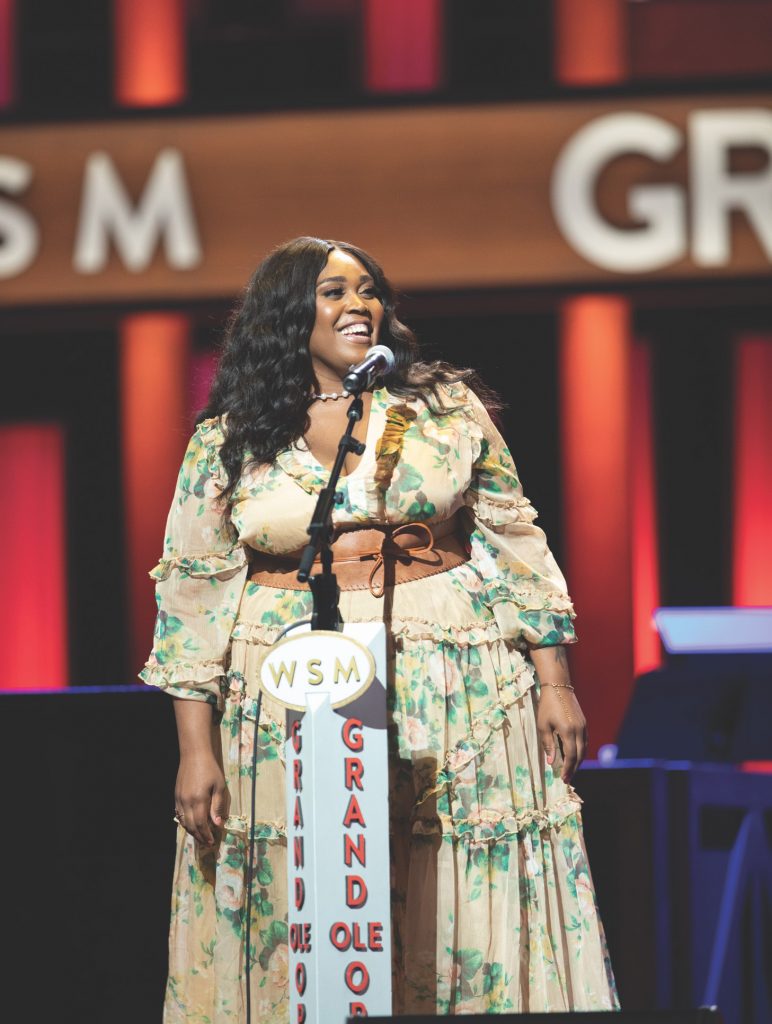 Despite only having released one EP to date as a solo artist, Compassion (2020), and remaining an independent artist (for now), Spencer’s career is taking off fast enough to leave a vapor trail. In 2021, CMT named her to its annual “Next Women of Country” list. In May, she made her network television debut, appearing on Jimmy Kimmel Live, where she and Brandi Carlile sang with the soulful Alison Russell. Spencer is slated to serve as the opening act for Isbell and the 400 Unit for three dates later this year, and she will perform at Merlefest in September. Spencer also made her debut at the Grand Ole Opry in May and signed with United Talent Agency for booking. And she recently performed with legendary hip-hop band the Roots at its pre-Grammy Jam Session. The band’s leader, Questlove, served as musical director for the 2021 Grammy Awards.

A proud MTSU alumna, Spencer is most certainly scaling that mountain, with her eyes fixed on the peak.

College students of color nationwide could connect with country music careers and experts from across the industry in a pilot program MTSU’s College of Media and Entertainment launched in 2021.

“The goal of this program is to educate students of color about country music in hopes that they will consider country music as a viable career path after graduation,” said Dean Beverly Keel, creator of the new initiative.

“The program will explore what today’s country music is, how the industry operates, and what the potential career opportunities are. In addition, this program will introduce industry leaders to African American students who are interested in internships and jobs. The goal is to create more diversity in all areas of the country music industry.”

The Bridges to Nashville series was co-sponsored by the Academy of Country Music, BMI, the
Country Music Association, Diversify the Stage, the Nashville Chapter of the Recording Academy, Nashville Music Equity, and MTSU’s College of Media and Entertainment.

Beverly Keel, dean of MTSU’s College of Media and Entertainment, is part of a trio of activists Billboard recognized as national change agents for organizing a Zoom panel discussion for Blackout Tuesday in 2020 that led to the creation of Nashville Music Equality. 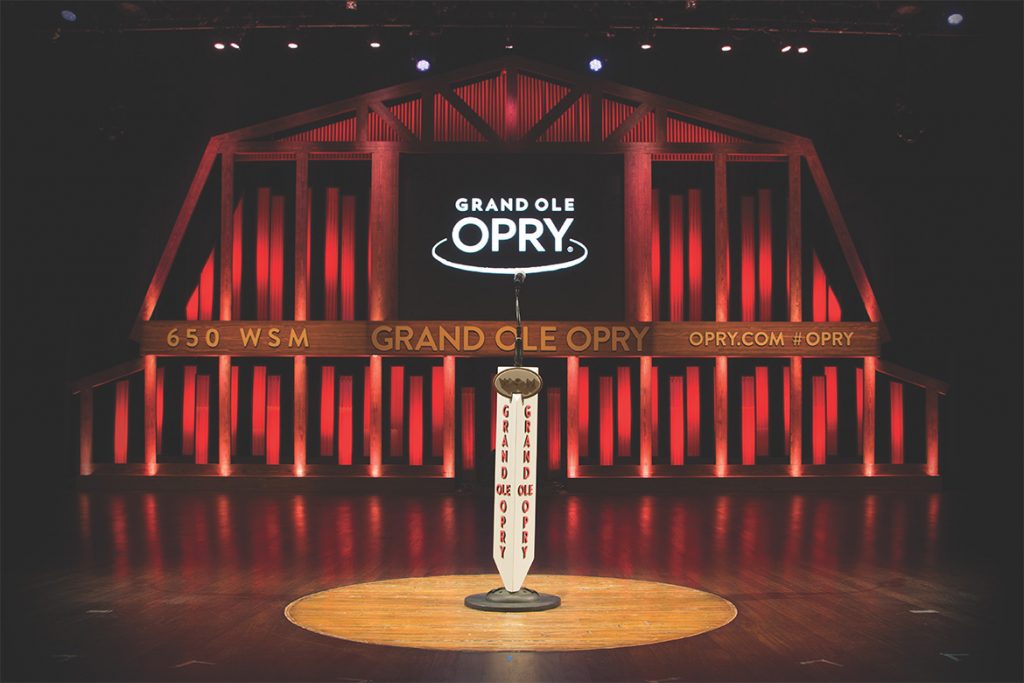 Keel, a 1988 alumna of MTSU, became the College of Media and Entertainment’s first female dean in January 2020 after teaching since 1995 in the internationally recognized Department of Recording Industry, including a seven-year stint as chair. A former record label executive and award-winning journalist, she served as secretary for The Recording Academy Nashville Chapter and is a member of the Academy of Country Music’s Diversity and Inclusion Task Force.