As a part of the university’s Black History Month celebration, the MTSU community will have a chance to discuss, revisit and view literature written by the famous African American abolitionist, orator and intellectual, Frederick Douglass.

This presentation, which includes a display of rare books and historical documents, will begin at 6:30 p.m. Friday, Feb. 21, in the Tennessee Room of the James Union Building, 516 Alma Mater Drive. The event is free and open to the public.

Parking and shuttle service to the event will be available in the Bell Street and Ingram lots off Middle Tennessee Boulevard. Off-campus visitors can find a parking map at http://bit.ly/MTSUParkingMap.

Nicholas Buccola, political science professor and founding director of the Frederick Douglass Forum on Law, Rights, and Justice at Linfield College in Oregon, will deliver the guest lecture, titled “Frederick Douglass’ Plea for Free Speech and Open Inquiry.” His appearance is being hosted by the MTSU Political Economy Research Institute, or PERI.

Buccola specializes in topics such as social justice, contemporary moral controversies and Supreme Court and constitutional law. Along with his academic expertise, Buccola has published political commentary in regional and national publications such as The New York Times, Dallas Morning News, Baltimore Sun, Dissent magazine and Reason magazine. 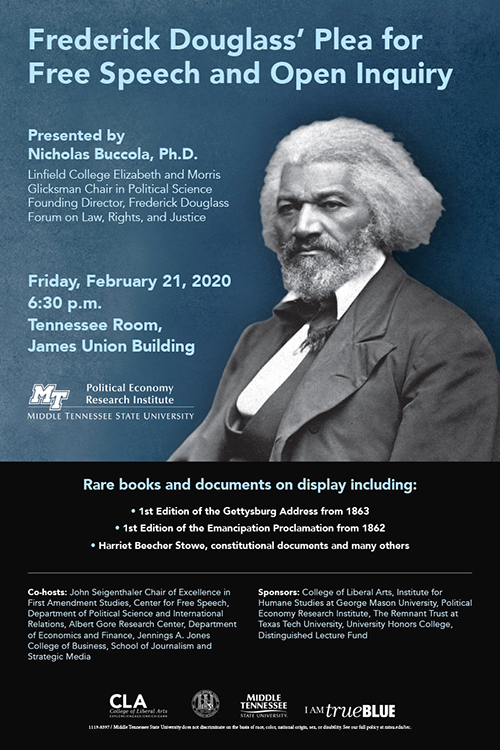 PERI Director Daniel J. Smith said he is delighted to have Buccola share his knowledge about such a historical figure with the MTSU campus and wider community.

“Frederick Douglass is, without question, one of the most important thinkers in American history,” said Smith. “We are excited to host Dr. Buccola for a lecture on how Douglass exercised free speech to become a recognized leader of the abolitionist movement.”

A slaveholder’s wife taught a young enslaved Douglass the alphabet, which was forbidden at the time. He would eventually learn to read, and it was that life skill that led him to yearn for and eventually achieve his freedom. Among his writings are several autobiographies describing his experiences in slavery and his life after the Civil War, including the well-known “Narrative of the Life of Frederick Douglass, an American Slave.”

Among the rare books and copies of historical documents on display will include the 1st Edition (1863) of the Gettysburg Address, 1st Edition (1862) of the Emancipation Proclamation, 3rd Edition (1777) of the Declaration of Independence and 1st Edition (1856) of “Dred: A Tale of the Great Dismal Swamp” by Harriet Beecher Stowe. These texts will be provided by the Remnant Trust at Texas Tech University.

“This is a once-in-a-lifetime opportunity to see these important texts and books in person and to gain a deeper appreciation for the role they played in American history,” Smith said.

Co-hosts for the event include the John Seigenthaler Chair of Excellence in First Amendment Studies, Center for Free Speech, Department of Political Science and International Relations, Albert Gore Research Center, Department of Economics and Finance, Jennings A. Jones College of Business and the School of Journalism and Strategic Media.

MTSU’s Political Economy Research Institute is a joint project between the Jones College of Business and the University Honors College. To advance its mission, the institute strives to engage in research and educational programs which uncover the institutions and policies that encourage and enhance human well-being.