NASHVILLE, Tenn. — Beginning this fall, Middle Tennessee State University will begin offering a new bachelor’s degree of data science as well as a graduate certificate geared toward working professionals in the emerging field.

MTSU leaders announced its Tennessee Data Initiative at a Tuesday, Feb. 18, news conference at the Nashville Technology Council’s headquarters, attended by university and NTC leaders and state officials, as well as a host of representatives and supporters from business and industry.

MTSU President Sidney A. McPhee said the university’s role as the largest provider of degree recipients in the greater Nashville area makes it imperative that its academic programs reflect workforce needs, including the constantly changing environments surrounding technology and data. 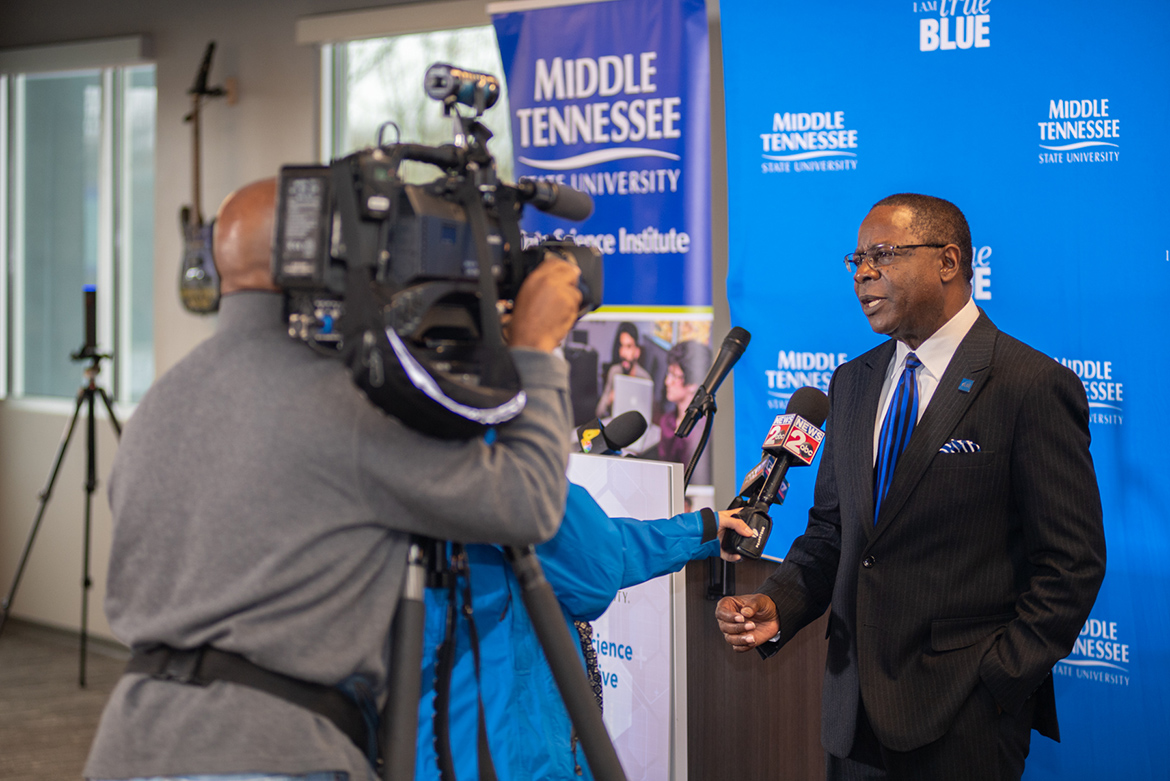 MTSU President Sidney A. McPhee conducts an interview Tuesday, Feb. 18, with WKRN-TV News 2 at the university’s kickoff of the Tennessee Data Initiative held at the Nashville Technology Council’s headquarters. The initiative includes a new bachelor’s degree in data science, a graduate certificate and pursuit of innovative programming and research project in the emerging field of “big data.” (MTSU photo by James Cessna)

With entry-level salaries averaging $70,000 to $85,000, “data scientists” fill the critical role within business and industry of analyzing and interpreting the mountains of data that decision-makers need to maintain a competitive edge.

“The demand for data scientists is intense and predicted to soar nationwide by 28 percent this year alone,” McPhee said. “In Middle Tennessee, tech workforce growth is projected to outpace national growth by an eye-popping 78 percent over the next five years. This bodes very well for the economic vibrancy of our communities and demonstrates the critical need for more technology-focused programs.”

Leading that effort is Charlie Apigian, director of MTSU’s Data Science Institute, whom the NTC named its Data Scientist of the Year last month.

Apigian said the new degree will create much-needed data scientists across numerous professions — from tech to health care to manufacturing and everything in between — while the certificate opportunities will “upskill” the region’s workforce for those looking to become “data-driven professionals.”

“Data will continue to proliferate at a fast pace, and acquiring the skills to understand data and applying that competency to add value to your organization will be not only expected but required,” said Apigian, a professor of information systems and analytics in the Jennings A. Jones College of Business. “With Middle Tennessee’s booming economy, it is imperative to plan how we will prepare the workforce for the new data world.”

Apigian helped MTSU launch the Data Science Institute in 2018 to get an academic foothold in the burgeoning area. He’s since pursued real-world projects such as the Hytch ride-sharing app and the Special Kids nonprofit while sponsoring various “hackathons” for hands-on learning and collaboration throughout the year. 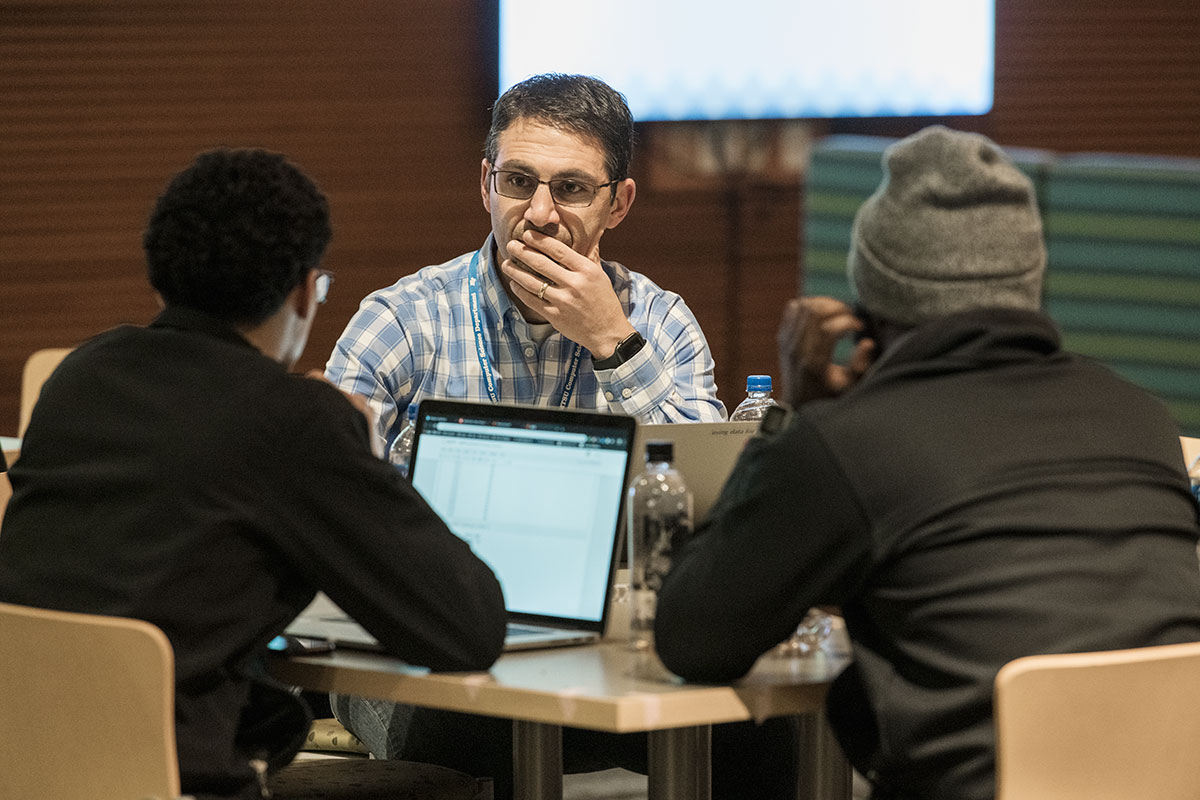 In this file photo, MTSU Data Science Institute director Charlie Apigian, center, consults with competitors at the fourth annual MTSU Hackathon, or Hack MT, where students, alumni, faculty, and industry mentors from MTSU and  other Tennessee universities spend 36 straight hours developing computer software technology products, then present them to be judged at a fair in the Science Building Atrium. (MTSU file photo)

Applications are now being accepted for the new bachelor’s degree program and enrollment is also now open for fall for the graduate certificate. The certificate is a four-course, two-semester program that will provide students with online content in data understanding, data exploration, predictive modeling and modeling optimization.

The degree program takes a cross-disciplinary approach to instruction — data science involves computer science, statistics and business intelligence — specifically through the Jones College of Business and the College of Basic and Applied Sciences, as well as the College of Graduate Studies.

Apigian said the university’s data initiative includes five key components: the new bachelor’s degree; new graduate certificate; a data science track in the already established Ph.D. program in computational science; research and special projects through the Data Science Institute; innovative programming, including partnerships in K-12, that give students internships and other hands-on opportunities to be exposed to data science.

MTSU freshman information systems and analytics major Cayson Seipel of Murfreesboro, Tennessee, is thrilled with the new degree program and plans to pursue his bachelor’s in data science as part of a plan to pursue a doctoral degree down the road.

“With the opportunities in Nashville, with companies like Amazon and others, MTSU is in the perfect place,” said Seipel, who added that data science perfectly aligns with his passion to solve problems using computers. “All of the professors are knowledgeable and it seems like everything is fitting perfectly together. I’m in the right place at the right time.”

The new bachelor’s degree program was approved last fall by MTSU’s Board of Trustees after it was reviewed and approved by the Tennessee Higher Education Commission. THEC Executive Director Mike Krause applauded MTSU for launching a program that “sets the standard for the rest of the state.”

“Data science is one of our most high-need fields and clearly indicates that MTSU has had their finger on the pulse of our employers,” Krause said. “This is a perfect example of MTSU anticipating what the future of work will be and responding accordingly. We could not be more supportive and look forward to what comes next for this program.

“As higher education goes through a period of great change, it will be crucial for institutions to anticipate what employers really need, and that is exactly what MTSU is doing with this program.”

“Middle Tennessee is well positioned to be a national leader in the field of data science,” Moyer said. “These new programs announced by MTSU will play a critical role in generating the talent required to fuel our future growth. We applaud MTSU’s vision and commitment to our future workforce needs.”

For more information about the MTSU Data Science Program, contact Apigian at Charles.Apigian@mtsu.edu or visit http://mtsu.edu/programs/data-science. 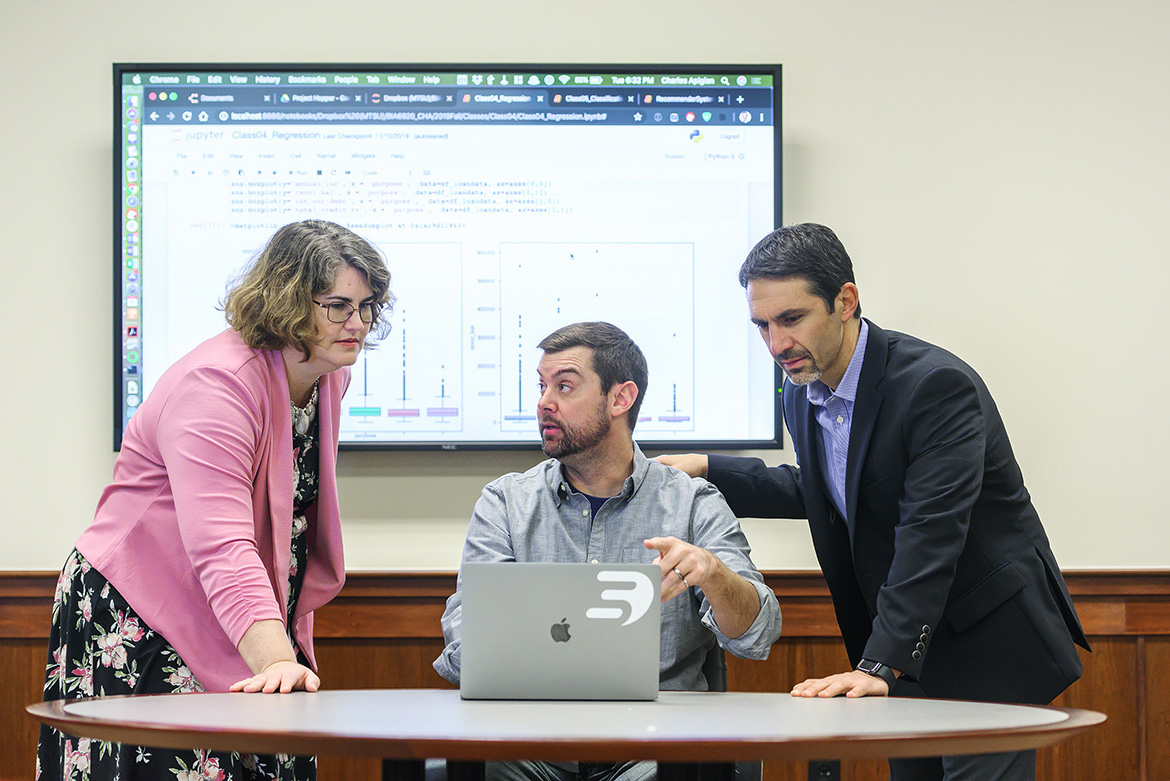 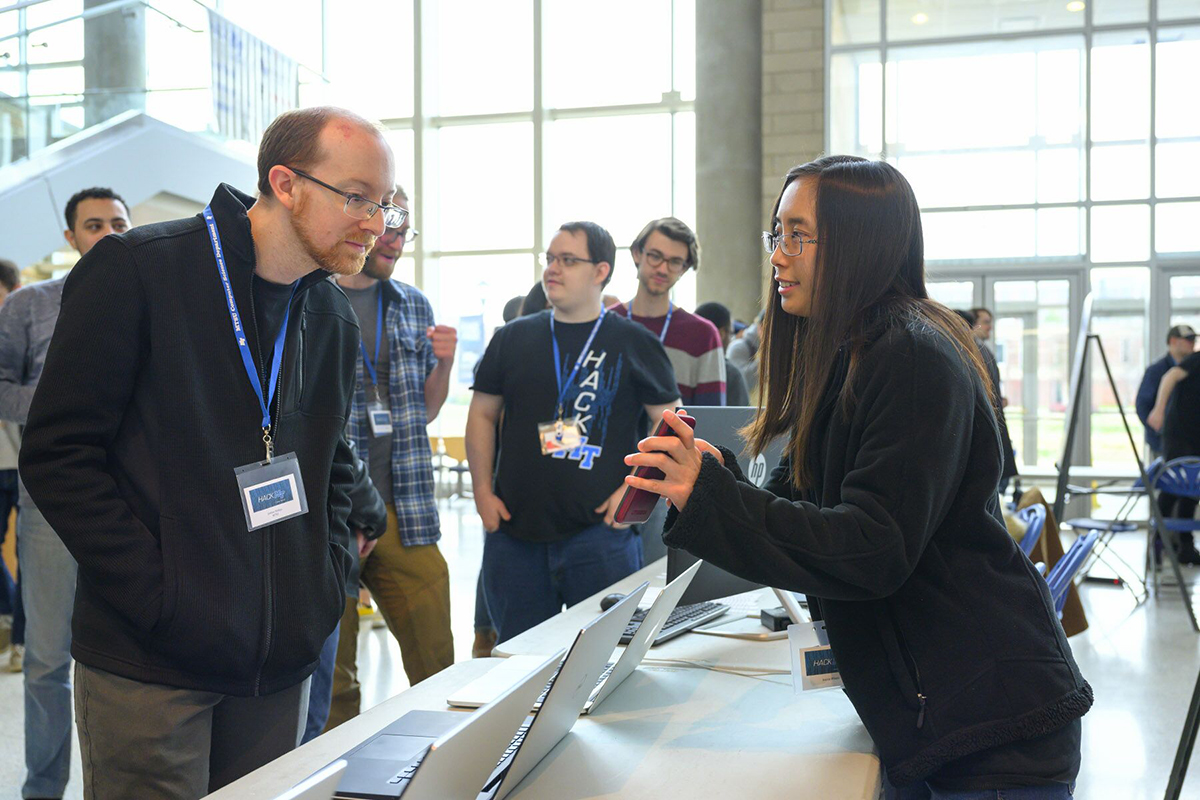