Moved by the devastation of Hurricane Dorian in 2019, Nathan Lathrop and four high school friends at the Center for Creative Arts in Chattanooga, Tennessee, wanted to do their part.

So they planned a fundraising yard sale, pooling items for the one-day event.

Lathrop, 18, handed MTSU President Sidney A. McPhee a check for $740 for the Raider Relief fund on Monday, Feb. 17, just before the annual President’s Celebration of Scholars event recognizing all guaranteed scholarship recipients planning to attend the university in the fall.

Prospective students came from across Tennessee and the South; one traveled from Redlands, California.

“It was a really tragic event that happened,” Lathrop said of the hurricane, which affected thousands of people in the Bahamas, including family members in McPhee’s native country. “When the hurricane first hit, we were already thinking of doing something good.” 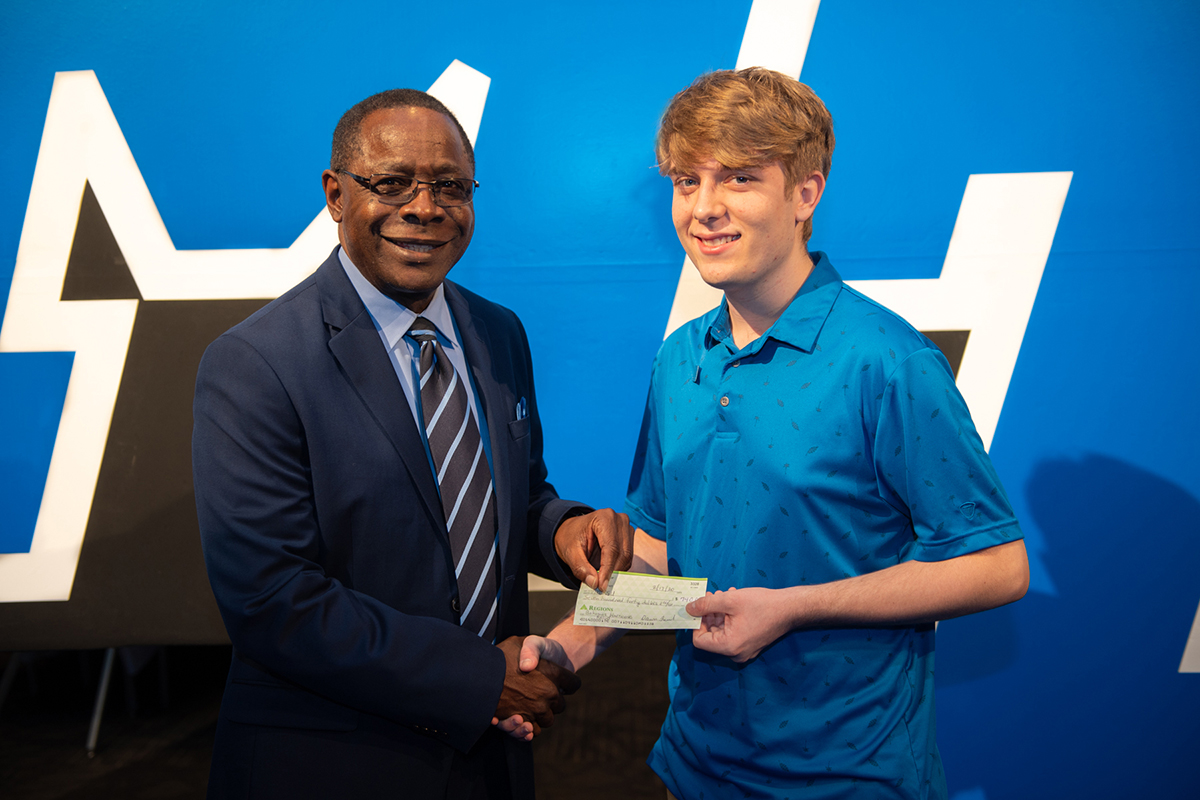 MTSU President Sidney A. McPhee, left, accepts a check for $740 from Nathan Lathrop of Chattanooga, Tenn., Monday, Feb. 17, for the Raider Relief fund to assist with Hurricane Dorian disaster efforts in the Bahamas. Lathrop and four Center for Creative Arts classmates held a yard sale to raise the money to help residents of McPhee’s native country. Lathrop, who plans to begin classes at MTSU in August, was attending the MTSU President’s Celebration of Scholars event in the Student Union. (MTSU photo by James Cessna)

Fellow seniors Johannes Odom, who also plans to attend MTSU and likely room with Lathrop, Logan Bisbrow and Abel Cooley and junior Noah Hawkins sprang into action. They collected items for about two weeks, then had the daylong sale. Their principal also has approved an ice-cream fundraiser to collect additional Raider Relief funds.

Wearing an MTSU blue top, Ford said her color choice was “all intentional. I’m OK with him coming here.”

With a 31 ACT score and 3.98 GPA, Lathrop received a Trustee Scholarship worth $5,000 per year. He plans to study computer science and also has an interest in business and studying Japanese.

“I just loved the (MTSU) campus from the first time I came. … I’ve applied for housing, so I’m ready to come,” he said.

“It was really commendable for Nathan and his friends to conceive the fundraising idea and want the money to go to the Raider Relief fund,” said McPhee, who told Lathrop the money would help purchase books for children in the Bahamas.

Along with the trustee scholarship, major MTSU scholarships include the Presidential, True Blue and Buchanan. Linda Olsen, director of undergraduate recruitment at MTSU, urged attendees to accept their MTSU scholarship by May 1 or risk losing it.

Student Government Association President Delanie McDonald of Carthage, Tennessee, a public relations major and a Buchanan Fellow in the University Honors College, told the prospective students and their parents about the “many life-changing opportunities” that await them at MTSU.

“This has been an exciting four years for me. I can’t wait for you to experience the same thing,” added McDonald, who participated in study-abroad courses, the Blue Elite tour guides, a women’s choir and other activities.

McPhee, who greeted each student as they entered the ballroom, posed for a photograph and handed each a commemorative coin, later told them, “You are our blue-chippers. … We want you. You are looking at a fantastic university that has received national and international recognition. The buildings, the growth … everything is centered on making this a great place for you to study.”