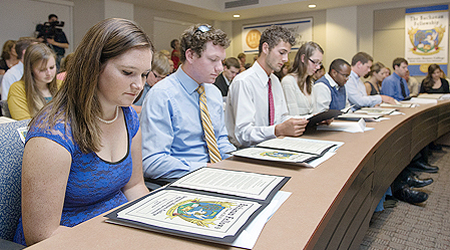 The top scholars in MTSU’s 2012-13 freshman class — a “strong and diverse” group, according to University Honors College Dean John Vile —have been formally recognized on campus.

“This class is as strong and as diverse as any,” Vile said. “I consider it a tribute to MTSU and to the Honors College that we have succeeded in attracting such an auspicious group of scholars.”

The Honors College awards the Buchanan Fellowship, named in honor of alumnus James M. Buchanan (Class of 1940), the recipient of the 1986 Nobel Prize in Economic Sciences. The fellowship is the highest academic award given to an entering MTSU student.

This year marks the university’s sixth class of Buchanan Fellows.

The 2012-13 class of Buchanan Fellows includes five graduates of Murfreesboro’s Siegel High School and three from Riverdale. The Buchanan scholars come from all across Tennessee as well as from Georgia, Washington state and Mississippi. Four are aerospace majors, and pre-law, pre-med and early childhood education are a sampling of other majors in the group.

“In terms of future achievement, the sky is truly the limit for our Buchanan Fellows,” Vile said.

The 2012 Buchanan Fellows include:

Prospective Buchanan Fellowship recipients must apply for undergraduate admission to MTSU by Dec. 1 of the year before full enrollment. They also must have a high school GPA of 3.5 or higher and a composite score of 29 on the ACT, provide an official transcript and write an essay of 500 words or less.