Investigate campaign news coverage on next ‘...

Investigate campaign news coverage on next ‘MTSU On the Record’ 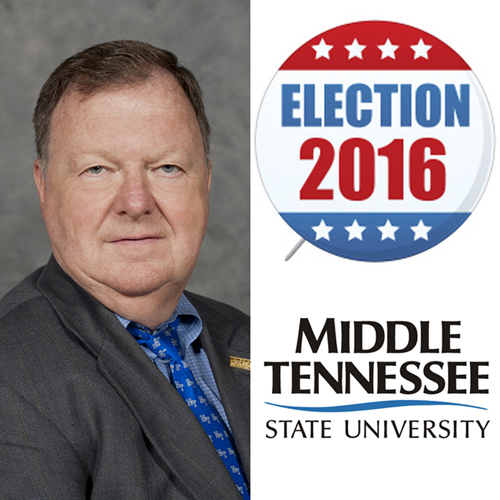 An examination of journalists’ performance during the presidential campaign and a preview of media relations with the incoming administration were the topics of a recent “MTSU On the Record” radio program.

Host Gina Logue’s interview with Dr. Larry Burriss, a professor in MTSU’s School of Journalism, first aired Dec. 5 on WMOT-FM/Roots Radio 89.5 and www.wmot.org. You can listen to their conversation below.

Burriss asserts that, with charges and countercharges flying virtually every day during the 2016 presidential campaign and the impact of social media and “fake news” websites, it was easy for the U.S. electorate to become confused.

“The details are what count. The reporters should have gone after those details. I don’t know if they had enough time to do that, though.”

Burriss has served as director of the School of Journalism, dean of the College of Mass Communication (now the College of Media and Entertainment), president of the MTSU Faculty Senate and as a member of the Tennessee Board of Regents. As a lieutenant colonel in the U.S. Air Force, he served on active duty in Somalia, Bosnia, Central America, Europe and at the Pentagon.