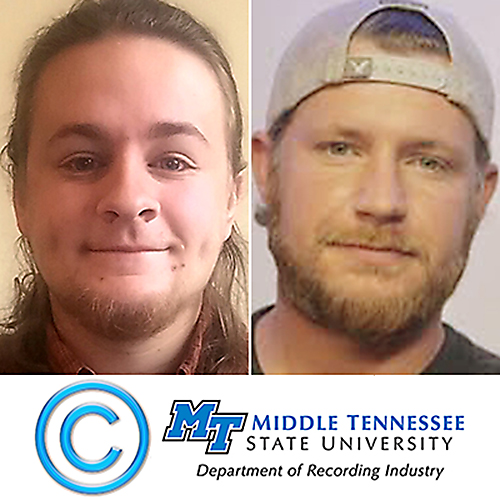 Two MTSU seniors are the dual recipients of MTSU’s 2016 Chitwood Award for Excellence for their plans to help three best-selling songwriters reclaim ownership of two of their popular compositions.

“The power of each of these 1983 songs made this a particularly exciting opportunity to shine the light on both blues and country works that have stood the test of time,” Wagnon said.

The Recapture Project is tied to U.S. Copyright Act (Section 203), which lets copyright creators terminate their publishers’ rights and reclaim ownership of their songs or books after a 35-year moratorium. Each student studying copyright law with Wagnon is required to participate in the project.

Wagnon, who also is an entertainment business attorney, said she will contact the Vaughan and Bramhall estates and Reid’s representatives to present the students’ proposal.

Each of Wagnon’s students also must create a plan of action for the recaptured work, including information that’s needed to reclaim the copyright 35 years after the original grant, assignment or license was finalized.

“This means Peyton and Rob had to demonstrate a future plan hat will be inventive and timely in the marketplace as of Dec. 31, 2019,” Wagnon explained.

Robinette specifically sought out works by some of his favorite artists and realized the time frame would fit songs from Vaughan’s debut album, “Texas Flood.”

“When I realized the connection between the two, my heart was set on the song ‘Dirty Pool,’” Robinette said. “This recapture project … blended legal process with art, allowing me to fully dive into my efforts.”

Williford, a Nashville recording industry major who also is a songwriter and musician, said his project on Reid’s 1984 Grammy winner for best country song “presented a particularly interesting and educational opportunity to gain real-world experience in the publishing world.”

“Drafting a proposal outlining the process which would allow Mr. Reid to exercise his right to recapture his intellectual property was a unique, exciting endeavor,” he added.

“I especially enjoyed the creative challenge of envisioning ideas for potential exploitation of his song in the future.”

MTSU’s Department of Recording Industry inaugurated the Chitwood Award of Excellence in fall 2014 to honor recording industry major David “Ritt” Chitwood, who was killed in a January 2014 traffic accident near campus.

Organizers said Chitwood, a Nolensville, Tennessee, resident, served as an inspiration for faculty and students alike because of his optimism and eagerness to learn after surviving a near-fatal 2006 car wreck.

They expanded the award this year to also honor the estate of Charles Monroe Johnson, a Tennessee attorney, author and World War II veteran whose 1954 memoir, “Action with the Seaforths,” had fallen into the public domain and has now been restored to Johnson’s family in a new copyrighted derivative work with new photos, a foreword by Johnson’s daughter, Mona, and a new cover illustrated by recording industry graduate Victoria Richardson.

Wagnon began the Recapture Project in 2011 for her copyright law classes to encourage research and legal detail as well as creativity and entrepreneurial thinking. Copyright law is a required course in MTSU’s Department of Recording Industry, which is a part of the university’s College of Media and Entertainment.

For more information about the Department of Recording Industry at MTSU, visit www.mtsu.edu/recording-industry.