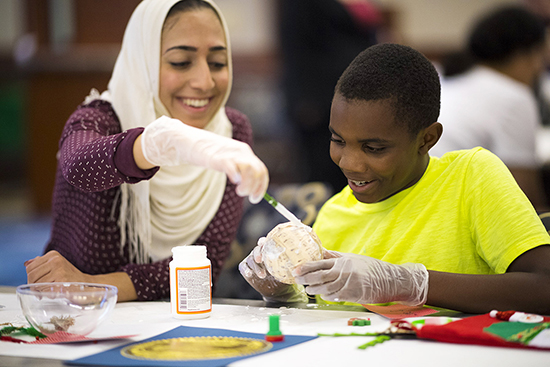 Two dozen young Midstate artists’ unique visions  are on display, with help from MTSU students, as Tennessee’s state Christmas tree shines brightly alongside the National Christmas Tree in Washington, D.C., through the end of December.

MTSU senior Sarah Mahmud, left, a health administration major from Hendersonville, Tennessee, applies a seal on a Midstate artist’s holiday creation during the VSA Tennessee ornament-making workshop at the university. The ornaments, prepared by young artists with disabilities, are displayed on the Tennessee state tree alongside the National Christmas Tree in Washington, D.C., beginning Dec. 1. (MTSU photo by Eric Sutton)

Participants in the VSA Tennessee program crafted the festive folk ornaments on a decidedly non-wintry afternoon, but a Yule log fire, a wisecracking Santa and holiday stockings and sweaters inside MTSU’s Ingram Building made the brief but boisterous workshop creatively delightful for the artists and their supporters.

Those supporters included friends and family members alongside MTSU professor Lori Kissinger and her EXL Organizational Communications in Communities students, who once again coordinated the project from beginning to end.

“They arranged for the decorations, the photo booth, the extra ‘make and take’ ornaments, stockings and the refreshments. They’ve done a great job!”

Yvette Cowden of Nashville, who’s worked with VSA Tennessee as a teaching artist for several years, provided the artistic direction for this year’s ornament project, an Appalachian folk-inspired design.

Each of the ornaments is filled with pinecones, musical instruments, ribbons, buttons, burlap, rolled paper, feathers, beads and more and will be protected by and viewed through its plastic globe’s unpainted side as it hangs on the Tennessee tree in Washington.

“It’s a fairly simple design. You just use your hands and your imagination and have fun,” Cowden said as the young artists inspected and collected items from the selection of supplies, already mentally planning their creations.

Judy Boyd of Murfreesboro looked on with a smile as her son, longtime craftsman Adam “A.J.” Boyd, consulted with his artist’s assistant for the afternoon, MTSU freshman Dillon Koenig of Cleveland, Tennessee.

Amid their happily noisy surroundings, the men discussed which supplies would have the best impact on Adam Boyd’s design.

“He is a crafty guy,” Judy Boyd said. “He’s participated in a lot of events with VSA. Whenever Lori (Kissinger) has a project that he’s interested in, he goes and does it.”

Koenig said he and his organizational communication classmates were determined to make the event a special one for the visiting artists.

“We took a class vote and everybody immediately said ‘YES!’” Koenig, a freshman majoring in public relations, explained. “We didn’t know what it entailed at first, but it’s been really exciting to see what we’re all doing together.”

Two of the special ornaments prepared during the VSA Tennessee ornament-making workshop at MTSU await packing for shipment to Washington, D.C., where they’ll be displayed on the Tennessee state tree alongside the National Christmas Tree through the end of December. (Photo courtesy of Lori Kissinger)

The VSA Tennessee artists’ ornaments will once again become part of a now 94-year-old tradition of celebrating Christmas with a national tree in the nation’s capital.

Every year, one-of-a-kind ornaments are made by Americans to hang on the 56 trees — one for every U.S. state, territory and the District of Columbia — that surround the National Christmas tree.

All the trees will be on display through the end of December on the Ellipse in President’s Park.