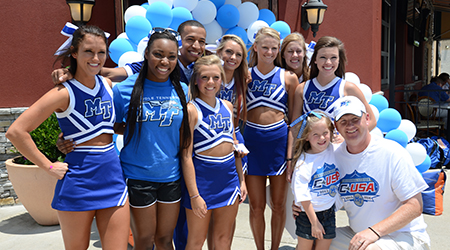 Two hundred fourteen days since the initial announcement, it’s finally official: Middle Tennessee is a full-fledged member of Conference USA after 13 years in the Sun Belt Conference, and a citywide celebration, “Paint the Town Blue,” is underway today.

MTSU fans filled the Sam’s All American Grill at the Stones River Mall to overflowing for the historic first-day event to celebrate the university’s new membership in C-USA.

Coaches and administrators were overjoyed at the turnout.

“It’s phenomenal,” football head coach Rick Stockstill said. “The support, the buzz, the excitement at Sam’s has been amazing.”

“This is exciting,” added women’s basketball coach Rick Insell. “I’m starting my ninth year here and I’ve never seen this much excitement and enthusiasm. The students, faculty, the players … it’s unbelievable. I could see this coming, and we’re not through yet.”

Director of Athletics Chris Massaro called it “a historic day for the university and it’s fun to share it with the fans. You can feel the excitement. I know our student-athletes and staff are excited. It’s a chance to elevate the entire university.”

MTSU President Sidney A. McPhee said that the university and the surrounding community are collaborating in a great partnership.

“To see the community come out and support the university and its athletic program, I’m really excited to see this kind of response,” he said.

McPhee added that he had heard “reports of many of our fans wearing our (MTSU) shirts at the various businesses” holding events throughout the day.

Employees and owners of more than 50 businesses and restaurants wore specially designed T-shirts with the inaugural C-USA logo today throughout Murfreesboro.

“I think it’s really going to help us build our brand better and help grow athletics at MTSU,” Jonathan Sisco, a fifth-year senior pitcher/infielder from Murfreesboro who is currently recovering from shoulder surgery, said today at the Boulevard Bar and Grill across the street from the MTSU campus.

“I think the top-tier teams are definitely going to be a lot better competition for us.”

Head baseball coach Jim McGuire admitted that the travel in the new conference will be a bit tougher, but he noted that there will be two C-USA teams the Blue Raiders will not have to play each year they’re in the conference. Those teams will rotate and won’t be the same teams each season.

“Conference USA is one of the top baseball conferences in the country,” McGuire added. “It’s always rated somewhere from fifth to seventh.”

Football players distributed posters and schedule cards around town, and a handful were at Reeves-Sain Drug Store and at Chick-fil-A at the Murfreesboro Town Centre, signing autographs and providing information on the move to Conference USA.

On Sept. 21, the Blue Raiders will have their first competition against a Conference USA opponent when football travels to Florida Atlantic. Six days later, soccer hosts UAB, and volleyball travels to Rice. The first C-USA football game at home is Oct. 5 against East Carolina.

As proud members of the Sun Belt Conference, the Blue Raiders dominated the conference by winning nine All-Sports trophies and 58 conference championships.

MT, which joined the Sun Belt on July 1, 2000, leaves the SBC with a league-best 50 conference football wins while also ranking first in victories over automatic qualifying conferences. Other notable milestones in the MT-Sun Belt partnership include:

MTSU cheerleaders pose with golf coach Whit Turnbow, front right, and his daughter, Reagan, today during the university’s historic first day as a member of Conference USA. The citywide event was headquartered at Sam’s All American Sport’s Grill at the Stones River Mall. (MTSU photo by News and Media Relations)

You can find more coverage of “Paint the Town Blue” here. You also can watch a video from the day’s events as well as one from last fall’s official C-USA announcement below.