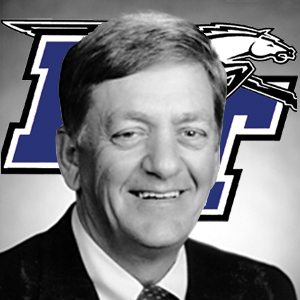 John Stanford, an icon in Middle Tennessee athletics, passed away on July 1 at the age of 77.

Funeral services are scheduled for Friday, July 5, at 11 a.m. at Woodfin Memorial Chapel in Murfreesboro. Visitation is scheduled Wednesday, July 3, from 4 to 9 p.m. at Woodfin’s.

“John Stanford has been a bedrock of MTSU for over 40 years and is one of three people to compete as a student-athlete, serve as a head coach and be an athletic director at Middle Tennessee, joining Charles ‘Bubber’ Murphy and Boots Donnelly,” said MTSU Director of Athletics Chris Massaro.

“He is an incredible person who had an undeniable footprint on our athletic department’s history. Much of the success we enjoy today can be attributed to Coach Stanford and his efforts.”

Stanford, who was elected to the Blue Raider Hall of Fame in 1987, came to Middle Tennessee in the 1950s after serving with the U.S. Air Force, where he had gained acclaim as a softball and baseball pitcher. He made his mark on MT baseball by becoming an All-Ohio Valley Conference selection.

After graduation, Stanford went pro, pitching two seasons for the Washington Senators before returning to Tennessee to serve as baseball coach for Shelbyville Central High School and Motlow Community College.

In 1974, Stanford returned to his alma mater to cultivate one of the most respected programs in college baseball. His Blue Raider record of 402-272-4 is second only to his hand-picked successor’s, former head baseball coach Steve Peterson.

Stanford’s teams won OVC titles four times and the league’s Southern Division crown five times. He took Middle Tennessee to the NCAA Tournament four times, making it to the championship round of the Midwest Regional in 1982 — only one victory away from a coveted berth in the College World Series.

As athletic director, Stanford worked with donors to improve baseball facilities and scholarships, upgraded the golf program and advocated the formation of the women’s softball program and field.

“Coach Stanford is the one who started it all and built the foundation for the success of our program. He is a legend not just for Middle Tennessee baseball, but the entire athletic department. He will be greatly missed.”

Stanford is survived by his wife, Nancy Trobaugh Stanford; his daughter, Maureen Stanford Caudle; and two grandchildren, Katie and John Owen Caudle, all of Murfreesboro, as well as other family members and friends. You can read his complete obituary here.