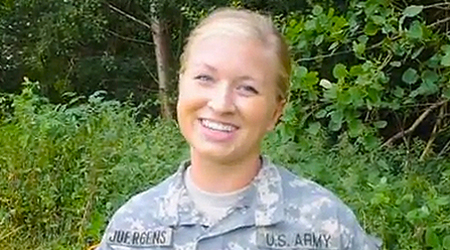 Hannah Juergens knows firsthand that being in the military will take you places.

The MTSU senior grew up in a military family, moving frequently. Juergens, 21, received her own taste of military travel this summer — and she knows it’s a hint of things to come.

Juergens, a School of Nursing student, said working with personnel with the 212th Combat Support Hospital in Miesau, Germany, in July and August proved rewarding.

“It was an excellent experience,” said Juergens, who lives in Fayetteville, N.C. “I would not say this lightly. There was a lot to learn on many fields.”

“This valuable program provides our cadets real-world experience on the roles and responsibilities they will assume upon graduation and commissioning as second lieutenants,” he said.

In Germany, the college cadets shadowed officers and led soldiers through a variety of situations, including planning for training exercises.

In the command and leadership field, where Juergens and the others saw how the operation works, they sat in conferences with entire units.

“It was a very diverse learning experience,” said Juergens, who has just returned to MTSU to begin serving as MS4 leader in the Blue Raider Battalion.

Nursing is her academic pursuit and the field that will become her career. During her summer training, she spent time in the intensive-care unit and operating room.

“I’m going to be an Army nurse,” she said. “I was in the ICU unit with nurses working with wounded soldiers coming out of Afghanistan. ICU nurses are on top of their skill. They got me doing hands-on things.

“It was an experience in itself. To be exposed to an Army nursing environment — with nurses and soldiers — was amazing.”

Juergens, who will be commissioned as a second lieutenant in December 2013, said the training “allows me to experience options I’ll have as an Army nurse.”

She said one of the trip highlights came Aug. 2, when the cadets helped simulate evacuating a casualty by helicopter. The experience allowed them to fly in one of the 12th Combat Aviation Brigades’ MEDEVAC helicopters as well as provided them with leadership experience they might not otherwise receive before commissioning.

Juergens, left, waits with fellow cadets to board a U.S. Army helicopter for an exercise in Cadet Troop Leader Training in Miesau, Germany. Others shown are Kevin Zuniga of Texas A&M International University, Clair Marlow of the University of Washington, Brittany Graham of Mercer University and Michael Settle of Norwich University.

“It was definitely a surprise, one of those maneuvers that we weren’t expecting,” Juergens said of the helicopter experience. “It was very freeing to be up there. We were moving really fast. It was awesome.”

She said that in the ROTC program, the cadets “are taught to be leaders, learning the basics of tactics. … This was the real Army experience.”

The military is in Juergens’ blood. Her father, U.S. Army Col. Richard A. “Rich” Juergens, has been a career military member in key positions. Her mother, Diana, spent five years on active duty as an Army aviator and authored a book, Wife of a Soldier, a Journey of Faith, in 2009. Hannah’s older sister, Elizabeth, was commissioned as a second lieutenant in December 2011 following her experience as a cadet in the MTSU military-science program. Rich Juergens spoke at the ceremony.

The 212th Combat Support Hospital includes the cadets in every aspect of daily operations so they could see the Army from an Army Medicine perspective.

1st Lt. Brian Thorson of the 212th Combat Support Hospital, a sponsor for the cadets for a second year, said working with a medical unit has a distinct advantage.

“Any time a unit is deployed, you’re going to have medical assets there, so you need to understand the echelons of care, so to understand that flow, it will be a huge asset to whatever unit they go,” he said.

Military science is one of 10 College of Basic and Applied Sciences’ departments. The School of Nursing is part of the College of Behavioral and Health Science.