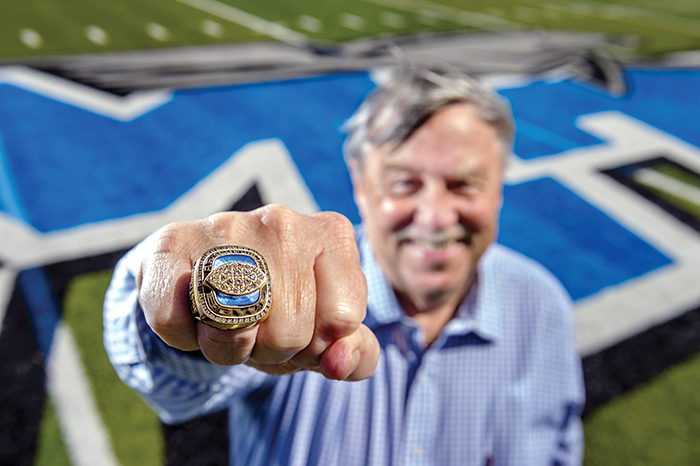 Dr. Terry Whiteside, dean of the College of Behavioral and Health Sciences, has been a “man about campus” for no less than 42 years.

Given his high-profile academic, administrative, and athletic roles through the years, the odds are pretty high that Whiteside has had at least some connection to the college experiences of many living alumni.

Because he’s spent more than four decades at MTSU, one would think Whiteside must be well known to everyone associated with the University.

But MTSU Magazine recently learned 10 things that readers may not know about this longtime Blue Raider.

His real name is Harold Dean, not Terry. Before Harold’s birth, there was a popular action-adventure comic strip called “Terry and the Pirates.” One of the main characters had a nickname that friends applied to Whiteside’s father, a fighter pilot. “Well, I guess my dad was a bit of a hotshot, so they called him Hot Shot Charlie,” Whiteside says. In the comic, Charlie’s best friend is a younger pilot named Terry Lee. Whiteside’s mother told him that before he was born, people would pat her on the tummy and ask, “How is Terry of the Pirates doing?” And the name stuck. When his first-grade teacher called roll the first time and told the youngster that his official name on school paperwork was Harold Dean, he had to go home and check with his mother to make sure it was true! Whiteside was seven when his father died from the aftereffects of his World War II service. The product of a single-parent home, “Terry” was only able to go to college because of his father’s G.I. Bill benefits.

In 1956, as an 11-year-old, Whiteside joined the Southwest Miami Boys Club and its under-12 Little League football team. The squad was undefeated that season and played in the Junior Orange Bowl game, and Whiteside got to check out the University of Miami locker room and meet his hero at the time, All-American fullback (and eventual pro) Don Bosseler. He also attended a banquet and sat next to movie star Gabby Hayes, John Wayne’s sidekick in many Western films. “From that Junior Orange Bowl game, my athletic career pretty much went downhill, I would say,” Whiteside says. He did go on to play high school football and tennis and was on the track team.

Whiteside’s uncle was city editor of the Fort Lauderdale Daily News and took him to space launches at Cape Canaveral. Whiteside vividly remembers the first one he saw, which left an indelible memory. “As it went up, the whole sky turned orange—you could have read a book on the beach with how bright that was,” he says. “My grandmother got up and started running because it looked like it was coming right at us even though it was going out over the ocean.”

Through media connections, the same uncle also got Whiteside in as an extra in the hit movie Where the Boys Are. He appears in a scene where a car runs a traffic light and almost hits movie star Dolores Hart. “If you know where to look, you can see me,” Whiteside says, describing his acting instructions as “just look buff.” In addition to Hart (who went on to give Elvis Presley his first on-screen kiss), Whiteside also got to meet megastars of the day George Hamilton, Connie Francis, and Paula Prentiss. “They were all extremely nice,” Whiteside says. He never appeared in a movie again. “I guess my movie career peaked at a young age, as well,” he says.

Whiteside was a high school football player in Miami at the height of the Cuban Missile Crisis. He vividly remembers the late afternoon he and his fellow classmates were gathered around their car radios listening as news broke that the Russian ships had turned around. “We all were hollering and cheering,” he says, “because we knew Castro could reach us with nuclear weapons.” The celebration didn’t last long. Whiteside says he and his fellow football players were thinking they would get the day off, but it was not to be. “The coaches came around and said, ‘You have 10 minutes to get on the field,’” Whiteside says. “South Florida football has always been serious business!”

Whiteside started his college career at the University of Florida, where his closest friends were his former high school football teammates playing on the 1963 freshman team. On that team was a quarterback named Steve Spurrier—a future Heisman Trophy winner and the now legendary football coach at the University of South Carolina. Whiteside says that after his mother’s death, he found a letter he had written to her following his first look at Spurrier on the practice field. “I don’t know who this quarterback is,” the letter reads, “but he is the best I’ve ever seen.”

Whiteside is known today as dean of one of MTSU’s colleges. But at his core, Whiteside is a professor of psychology—and a darn good one. He created the sports psychology class offered at MTSU. (When he was in grad school, sports psychology in America really didn’t exist.) Whiteside worked as a sports psychologist with elite professional athletes to sharpen their mental approach—including one of legendary boxing promoter Don King’s fighters who fought for the Junior Middleweight championship of world.

There’s very little Whiteside hasn’t done on the academic/administrative side at MTSU (including being the only two-time Faculty Senate president). The joke used to be that Whiteside was like a Kelly Services administrator—just plug him into a role when you have a short-term need. When President Sidney A. McPhee needed an interim director for the former College of Education and Behavioral Sciences, Whiteside fit the bill for about two years. And when that college was split into the College of Education and a separate, new College of Behavioral and Health Sciences (with six departments), McPhee named Whiteside to be its first dean. “It was an incredible honor, really,” Whiteside says, “to start a college, well, not from scratch, but, let’s say, founded on a shoestring. And we’ve never had a hiccup.” 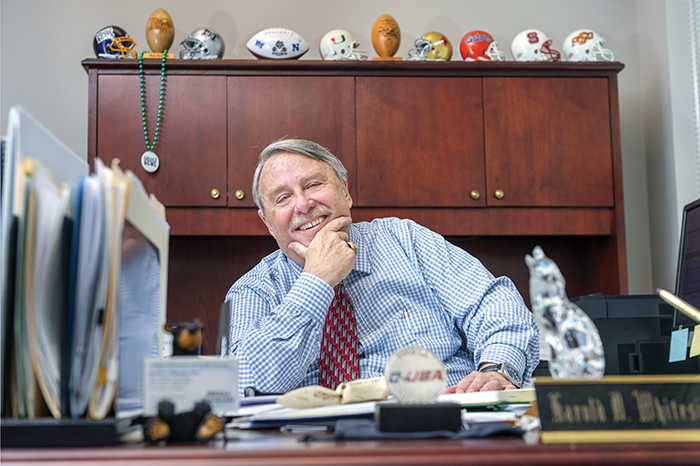 Terry Whiteside in his office in the Cason-Kennedy Nursing Building

As faculty-athletic representative at MTSU for the last 14 years, Whiteside has had a hand in hiring every coach at MTSU except track coach Dean Hayes (who has been here 50 years). But there’s more to it than just helping to hire coaches. The NCAA mandates faculty oversight of athletics, and that carries a three-fold responsibility: first, to maintain academic integrity (meaning not allowing things to occur like what happened at the University of North Carolina, with fake classes for athletes); second, to maintain the welfare of student-athletes (making sure they get proper nutrition and use safe equipment); and third, perhaps most intriguing, to serve as the NCAA prosecutor when there is a violation. “It goes through me,” Whiteside says. “My job is to protect the institution.” In his 14 years in the position, MTSU has been free of major violations. Coach Rick Stockstill has given Whiteside a team ring for each of the bowl games the football team has been to in recent years. (Whiteside is shown here wearing one of those rings.) Even more impressive than his role in on-field victories are Whiteside’s efforts to improve the academic achievement and progress of student-athletes. That work, accomplished with the help of others, has been recognized by the NCAA. When the NCAA’s Academic Progress Report (APR) first came out about a decade ago, MTSU was dead last on the list in terms of student-athletes staying eligible and moving toward graduation. Under President McPhee’s oversight and with Whiteside as faculty-athletic representative, MTSU climbed from worst in the nation to the model program it is now. Even the NCAA’s magazine profiled the University for its turnaround. These days, when the APR ratings come out, the top 10 programs include names like Stanford, Notre Dame, Vanderbilt, and . . . MTSU. “I’m very proud about being just a part of that,” Whiteside says. Many of the methods used to turn around student-athlete academic progress at MTSU are now being used campus-wide as part of the University’s Quest for Student Success.

Each year, the highest award given to a football player at MTSU goes to someone who has shown excellence in athletics, academics, and community service leadership. It’s called the Whiteside Award, named after Terry. “It’s hard to express how humble that makes me feel,” Whiteside says. “Really, I don’t deserve that.” When organizers of a prospective annual conference for the LGBT+ community on campus began looking for an academic home (a requirement to host a conference), Whiteside agreed to let his college be the host. “It was an easy decision for me,” he says. “I’ve always been committed to diversity and believe everyone should have the right to love who they want and shouldn’t be discriminated against in any way because of anything about them except their own accomplishments and own deeds.” At the banquet for the first conference, Whiteside was awarded the Ally Diversity Award, honoring a straight ally or friend of the LGBT+ community. This year, the award was renamed the Whiteside Award. “I was really touched by that,” Whiteside says. “I’m probably the only person in the country who has two awards as diverse as these named after him—a football award and an LGBT+ award. Both of them are very humbling!”