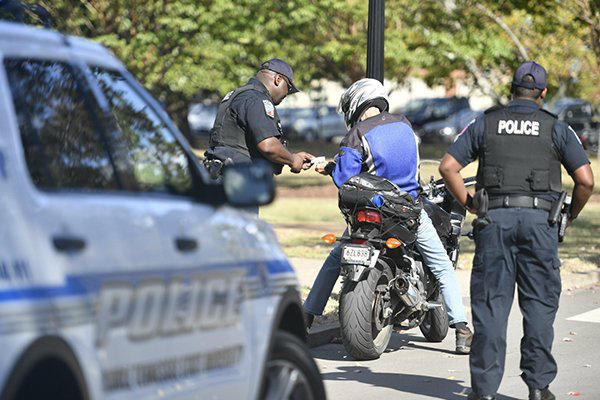 Middle Tennessee State University’s police department would gain more authority to work with Murfreesboro law enforcement outside campus under a plan being considered by city and university leaders.

The proposal was put forward last week to a group assembled by MTSU President Sidney A. McPhee and Murfreesboro Mayor Shane McFarland to develop strategies to combat crime in off-campus apartment complexes.

The group is drafting an agreement that, if approved, would allow campus police to support and assist Murfreesboro police as requested by the city in off-campus areas. It would likely start with MTSU Police conducting inspections of complexes as part of a safety awareness program that is also being developed.

“We must be energetic and determined in our efforts to keep our campus and community safe,” McPhee said. “I am pleased Mayor McFarland and our city partners have long made this a top priority and are willing to explore new ideas.”

McPhee and McFarland asked MTSU Police Chief Buddy Peaster and Murfreesboro Police Chief Karl Durr to work with city and university colleagues to draft an agreement for consideration by mid-June with a July target for implementation.

The president and mayor also commended the outstanding work of the police, which has resulted in arrests within days of the recent homicides, as well as the stepped-up patrols around the complexes by Murfreesboro police.

“The safety of our city and citizens, students and visitors remains our primary concern,” McFarland said. “It requires the teamwork and involvement of the city, the university, the complexes and other entities who can help us in our efforts.”

McPhee said he was concerned how many off-campus complexes, which are marketed to students, are becoming increasingly populated by non-students. Many units in those complexes are rented by the bedroom rather than full apartments.

“I am hopeful that the concerted efforts by the city and university will bring about substantial changes and tighter security at these private enterprises that are being marketed and leased to our students,” McPhee said.

McPhee and McFarland, along with city and university officials, plan to meet with complex owners and managers this week to discuss further the safety awareness and inspection program and share other concerns.

MTSU Police employs 44 full-time officers, five full-time dispatchers and about 20 part-time student workers to patrol the 500-plus-acre university campus. Its officers are commissioned, have full arrest powers and meet the same employment and training requirements as other law enforcement in Tennessee.

In most instances, MTSU police may only be engaged on campus and areas immediately adjacent to the campus; on all property or facilities owned, leased, controlled or operated by MTSU; or on any public roads or rights of way contiguous to, or within the perimeter of, university facilities or property.

Peaster said MTSU Police has “close, working relationships with local, state, and federal law enforcement agencies,” which are available to help as needed on campus. MTSU Police has a mutual aid agreement with the Rutherford County Sheriff’s Office for additional personnel and equipment in the event of emergencies.

The safety inspection program for apartment complexes is one of several ideas being developed by the city-university group assembled by McPhee and McFarland.

The proposal would allow apartment managers to invite police to assess security measures and practices in place at complexes. Facilities that meet criteria and implement recommended best practices for safety would be eligible for a special emblem that could be displayed to prospective tenants.

The university would then make available the list of complexes who earned the safety emblem to prospective students and families seeking information on off-campus housing options.

The city-university group is also working to allow city police to refer criminal and non-criminal cases involving students off campus to the university’s Office of Judicial Affairs and Mediation Services for review under MTSU’s Code of Conduct.

And it is working on an easy-to-read online site so that prospective students and parents can quickly see how many police calls and violent crimes have been recorded at complexes on a quarterly and annual basis.

And, the president said, the latest campus crime statistics from the Tennessee Bureau of Investigation show drops in most major categories.