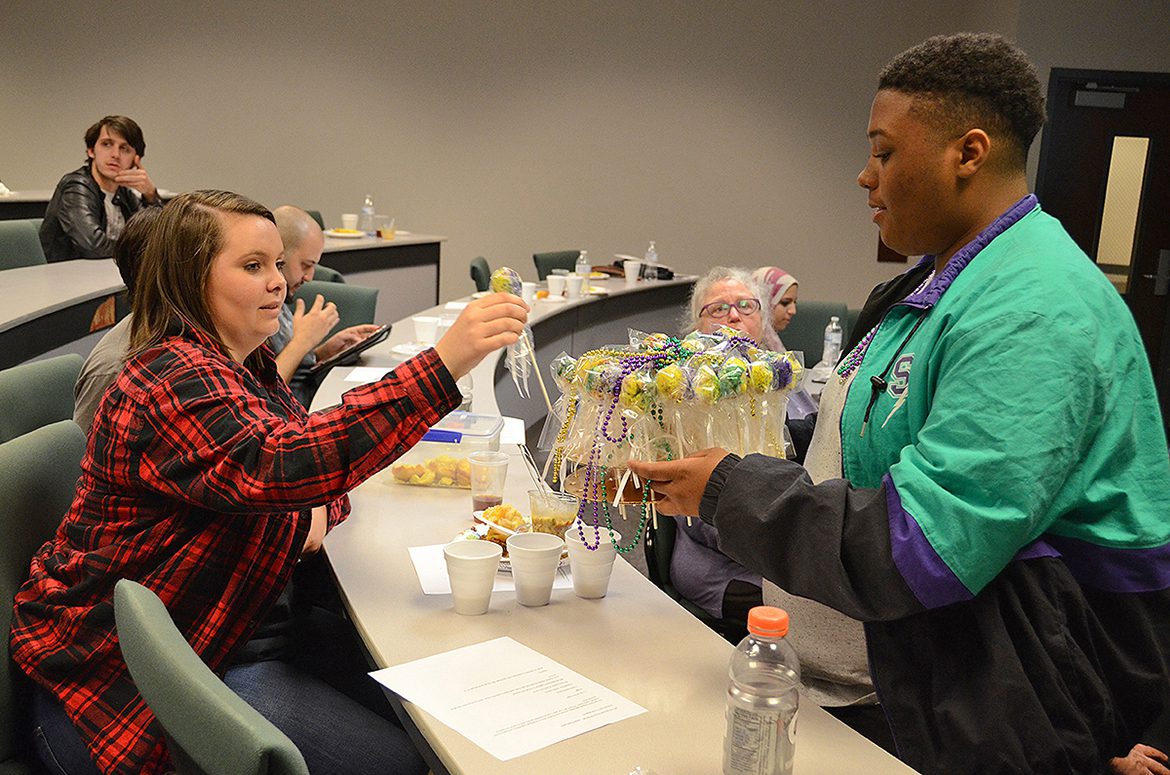 One by one, students in MTSU management professor Jackie Gilbert’s class came to the front and took their classmates through slideshows of their community service hours at local nonprofits during the spring semester.

It was the final meeting of the spring Principles of Management 3610, an upper level Experiential Learning/MT Engage course for juniors and seniors held in the Business and Aerospace Building.

A minimum of 10 community service hours combined with culminating in-class presentations were a requirement for this class, which forced Jones College of Business students to apply theory gleaned from textbooks to real situations inside and outside of the classroom.

“EXL (experiential learning) is learning by doing,” Gilbert said. “So I try to have these activities where I can get them immersed in the topic and where they actually have to present something to their peers, and in addition to that, they work in teams.”

Gilbert’s Principles of Management class gave these students an overview of management responsibilities and a foundation in skills such as planning, organizing, leading and controlling, with a specific emphasis on understanding employee behavior.

The 33 students in the spring course earned final grades derived from homework assignments, journaling, community service, chapter quizzes, in-class assignments and class participation. Working in teams is a must in Gilbert’s course, with students signing a team agreement on how they’ll interact with each other. Teams also developed a conflict management plan.

An “extreme animal lover,” MTSU senior Shea Kramer volunteered at Rutherford County PAWS (Pet Adoption and Welfare Services) to fulfill her service hours. And after spending time at the west Murfreesboro nonprofit, the Florida native is now strongly considering adopting because “seeing those animals stay there week after week was really heartbreaking.”

But for Kramer, a health care administration major with a minor in psychology and health care services, working at PAWS also drove home the importance of communicating with staff and volunteers, a skill she feels will help her in her current managerial role outside of class as well as her eventual goal of running her own elder care facility or hospital.

“I feel like it’s a class that everybody should have to take,” Kramer said. “I was able to tie in a lot of the things I learned in Dr. Gilbert’s class toward becoming a better manager, and knowing to ask people what they think instead of micromanaging them and telling them this is what should happen.”

Other hands-on components in the course included a competition in which student teams created an original motivational song that would jump-start the day for a company’s employees. For extra credit, student teams developed cultural presentations that included food samples.

“Students certainly had fun creating their motivational songs and we judges enjoyed their work!” Hoffschwelle said. “While having fun, students also learned how to collaborate with each other and to communicate their classroom learning to a new audience through music and visuals.

“Engagement like this helps students think about their learning in new ways and enhances the skills necessary for success in their academic and professional lives.”

For cultural presentations, students served and described foods associated with the culture, and some even dressed in “traditional” attire or showed photos and artifacts. Kramer’s team presented Southern culture, with Moon Pie, sweet tea and cornbread samples to enjoy. Other teams highlighted cultures from across the globe, with Saudi Arabian and Ethiopian culture among other presentations.

“We had a very diverse class,” Kramer said.

Take Dawit Tesfaye, a junior majoring in informational computer science with a business minor. He was part of a group of four students, with him and two other students being natives of Ethiopia while the fourth member was from Ghana.

Tesfaye said the group’s presentation of Ethiopian culture focused on some of the things for which African nation is known — discovering coffee, Orthodox Christianity, the Lalibela labyrinth of churches and long-distance running, for example.

A self-admittedly “shy” person naturally, Tesfaye said learning the dynamics of working within a team environment and developing presentations will prove useful in his career: “The more you do it, the better you get. I was really shy when I first came here … the more I started standing out and speaking, the more confident I get.”

Dates, a staple food in Middle Eastern countries, and a green salad were among the items students brought to class for cultural presentations in Dr. Jackie Gilbert’s Principles of Management course. (MTSU photo by Randy Weiler)

“One of the reasons we did that was to learn about diversity in a fun, nonconfrontational way,” Gilbert said. “I think it created a closeness and a curiosity that typically you wouldn’t have had otherwise.”

To get an experiential learning component in diversity, students had access to the virtual reality software “Second Life.” It allows users to create virtual “personas” in which they can change facets of their real personas such as gender or race. They would then navigate through this virtual world to see how others perceive them.

“The nature of the internet is changing … it’s rapidly morphing into a more dynamic visual world,” Gilbert said. “That’s what they’re going to be encountering in the next five years.”

“Those are some of the things for them to consider.”

For more information about the MTSU Department of Management, visit http://www.mtsu.edu/management/.