(EDITOR’S NOTE: Homer Pittard Campus School plans its 90th anniversary celebration for 4 to 6 p.m. Tuesday, April 16. Dr. Rita King, shown above, former principal and current president of the school’s support group, Friends of Campus School, reflects on the school’s history and its importance to the community.)

In 1929, the United States was a very different place.

It had been about a decade since the end of the first world war, and the country was on the threshold of The Great Depression.

Campus School, which was named Homer Pittard Campus School in the 1980s to honor the noted MTSU educator and Rutherford County historian, still serves the same purpose today, 90 years later. The school is owned by MTSU but is operated by Rutherford County Schools as part of an ongoing, lasting partnership.

In the school’s lobby, a sign reads “Welcome to the Legacy,” and the walls are covered with framed photos of former students, classes, teachers and administrators.

That legacy will be celebrated with the community from 4 to 6 p.m. Tuesday, April 16.

The school’s support group, Friends of Campus School, and the school are hosting an open house for past students, employees and the community at-large.

Dr. Rita King, the president of Friends of Campus School and a former teacher and principal at the school, recently sat down to discuss her history with the school and its importance in the community.

Q: What brought you to Campus School?

I did my work at the university here when I was doing my pre-student classes. I came over here a lot, and I was a nervous wreck. As a college student I came over here and did my initial training and then I was hired by Rutherford County when I graduated, in Smyrna. Then an opening came up here for fourth grade, so I immediately turned in my paperwork.

Q: What led you to be principal?

Many of the teachers came to me and asked me to do it. I hadn’t really thought about doing it, but I had just gotten my degree from Vanderbilt in administration, and so that’s one of the reasons.

Q: You left the school in 1995, but it wasn’t long before you got involved again. What’s your role with Friends of Campus School?

I’m still the president of Friends of Campus School, and they won’t let me resign. [laughter] I do know the building, I know a lot of the people, and I enjoy it.  I’ve been with this group for 10 to 12 years. Kathy Clark, a dermatologist, had finished here at Campus School, and she started the support group. It didn’t take long for it to take off.  We needed names, contacts and people to be able to reach out to them for their support, and so that’s how it got started.

Q: What should people expect when they come to the 90th anniversary open house on Tuesday, April 16?

We usually do that every year, although we didn’t have it last year. … One of the board members suggested we celebrate the 90th anniversary of the building. So we started working on it. That’s Tuesday from 4-6 p.m. We’re going to have memorabilia displayed in the gym, the history of every decade. We’re going to honor the Goodman family, because they’ve had so many family members go through the school, so we’re honoring them in the library. And the fifth-graders are going to dress up as famous people from the decades. You can go up to them and touch them, and they will tell you who they are and why they are important. We’re also going to be collecting memories. People can either write down their memories or record them. I have a lot of former teachers who are coming to assist us with everything. 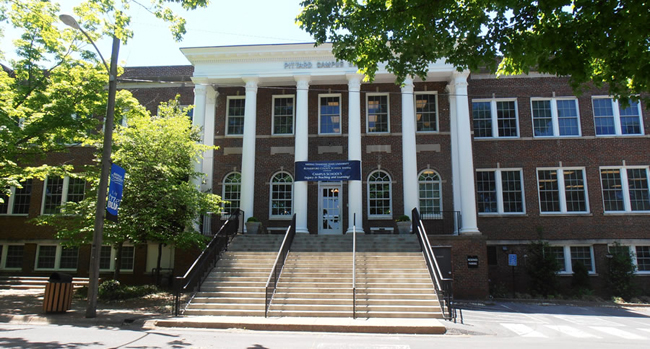 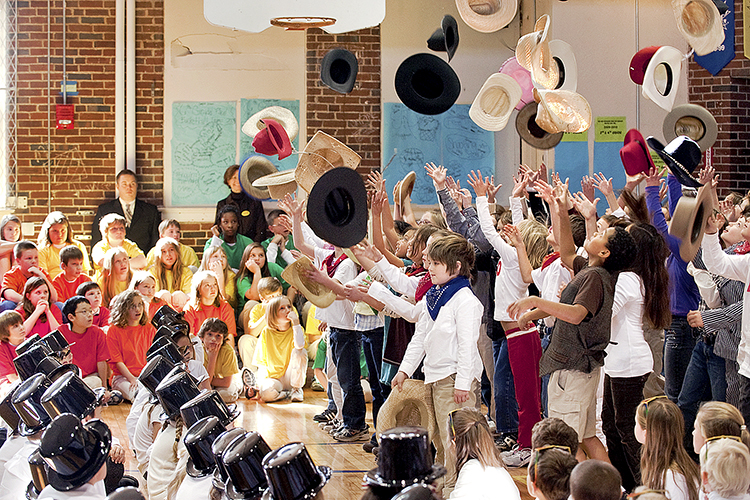 Third-grade students at Homer Pittard Campus School toss their hats in the air while performing “I’m an Old Cowhand” in the gymnasium at the school’s 80th anniversary celebration in this 2009 file photo. Campus School is celebrating 2019 as its 90th year of service to elementary school students — and to Middle Tennessee State University education majors who did their student teaching there — with a big April 16 event. (MTSU file photo by J. Intintoli)