Baby chicks steal the show at ..

Almost a century of service in educating generations of students produces a lot of cherished memories for those with connections to Homer Pittard Campus School, the K-5 teaching laboratory school owned by MTSU and operated by Rutherford County Schools.

Dozens of former students, parents, teachers, staff and community supporters returned for the annual open house held Tuesday, April 16, and hosted by the Friends of Campus School organization at the Lytle Street campus. Among those attending was 94-year-old alumna Evelyn Turney.

Turney, who attended the school in the late 1930s when it also served ninth- and 10th-graders, said she really enjoyed “seeing some of my past acquaintances and … looking at the building to see how it’s changed.

“And I was glad to finally meet the new principal.”

That principal, MTSU alumna Sherry King, took the helm in 2013 and said she believes events like the annual open house allow the Campus School community to celebrate its rich history and traditions been built over the years.

“It’s like a homecoming. It’s such a wonderful event,” said King as lines of visitors milled around the school’s gymnasium to view tables filled with photos and other memorabilia from previous decades. “We’re like generations of family. Once you’ve gone here, you always belong here.” 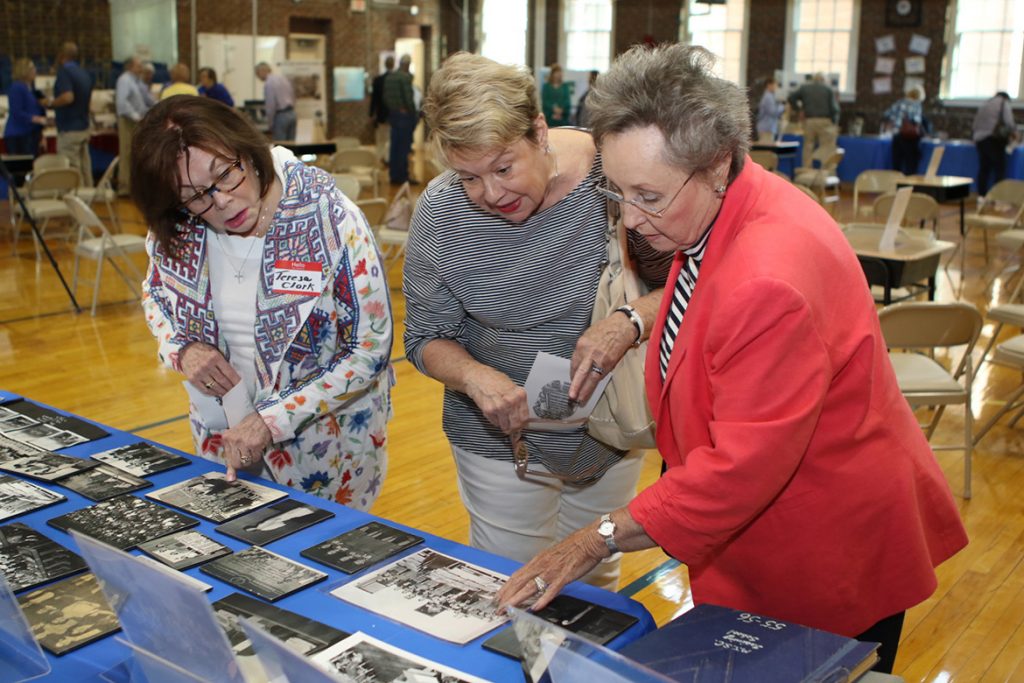 MTSU’s support continues to be a critical component of the school’s success, King said, noting that MTSU President Sidney A. McPhee and College of Education Dean Lana Seivers stopped by the school Tuesday to present a special certificate in recognition of the school’s 90th anniversary.

This year’s open house also honored the Charles Goodman family. Multiple generations of its members have attended the school.

“As this community knows so well, Campus School is a testament to MTSU’s origins as a normal school to train teachers and its continued commitment to quality education,” McPhee said. “This special partnership between our university and Rutherford County Schools provides our students with invaluable training and is a jewel within our community.”

“We just have a great connection and a great partnership,” King added. 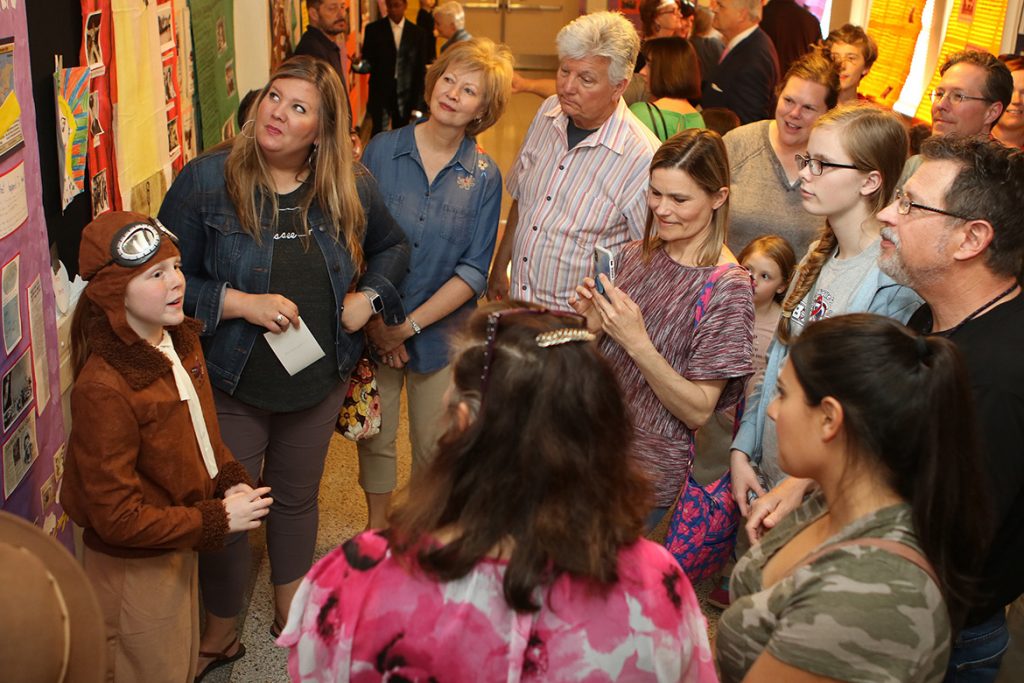 The open house included its traditional “Stroll through the Decades” presentation in which fifth-graders portrayed a wide variety of historical figures ranging from civil rights icon Rosa Parks to astronaut Neil Armstrong and from former President George W. Bush to, of course, Elvis. 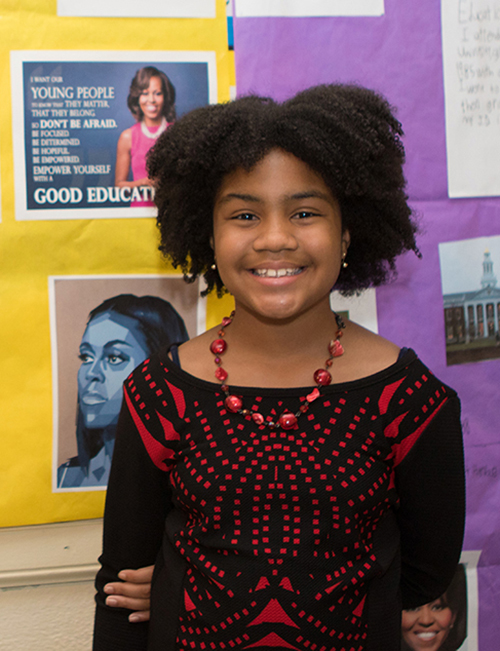 Parent Brooke Scott looked on with pride as her daughter, Jada, stood at the ready to tell visitors all about the historic figure she was portraying, former first lady Michelle Obama.

“We absolutely love Campus School. We’ve been here since kindergarten,” Scott said. “It fosters an environment of teamwork, creativity and growth. They really work one-on-one with the students … and challenge them to go beyond and reach their full potential.”

Fourth-grader Abigail Williams was among the students serving as student ambassador and tour guides for the event, explaining to visiting alumni the current happenings at the school while also learning about the school’s history themselves.

“It’s really great because I love to hear their stories … and the memories they have from here,” Williams said. 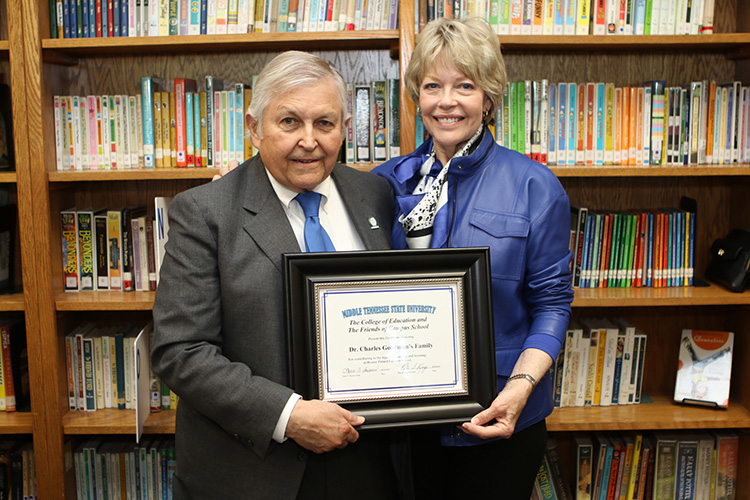 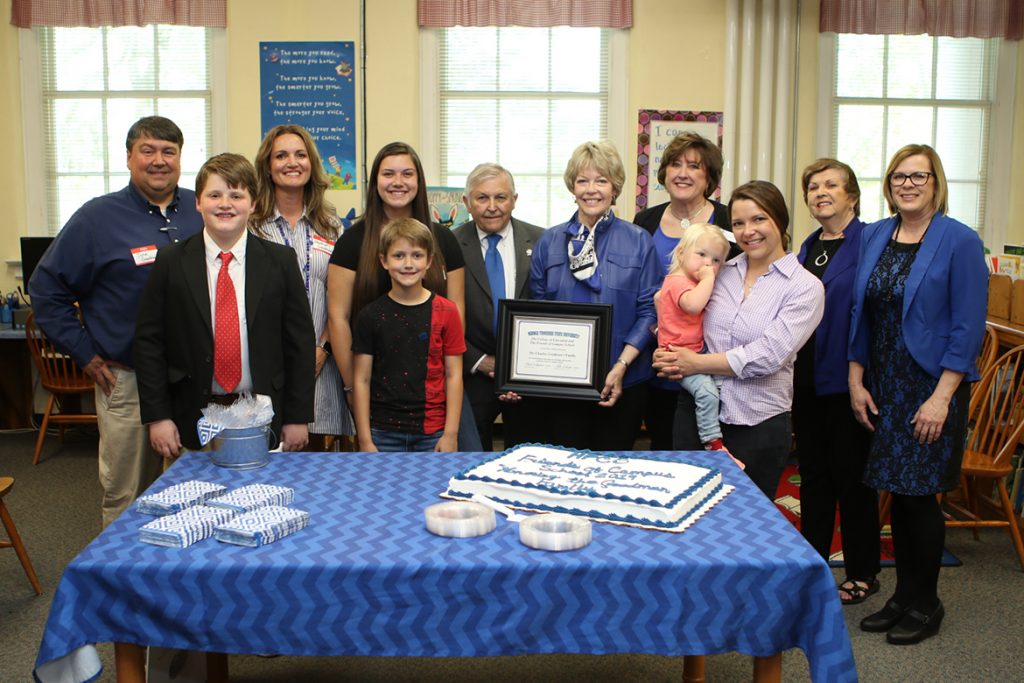 Members of the Charles Goodman family and their supporters gather for a photo Tuesday, April 16, after the Friends of Campus School honored them for their longstanding connections to the school during the open house and 90th anniversary celebration at the Lytle Street campus. From left are John Goodman, Jack Goodman, Heather Goodman, Annabelle Goodman, Knox Goodman, Charles Goodman, Delia Goodman, MTSU College of Education Dean Lana Seivers, Carolyn Goodman-Henn and her daughter Marcie, Friends of Campus School President Rita Schaerer-King and school principal Sherry King. (MTSU photo by James Cessna)