‘Can Jam’ has entertainment plus food ...

‘White gold’ is center of swee..

‘Can Jam’ has entertainment plus food for needy 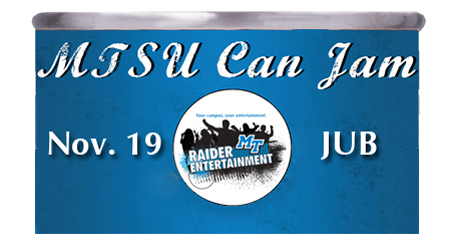 An upcoming concert at MTSU will be more than a feast for the ears — it’ll also provide a good meal for hungry students and community neighbors in need.

The “MTSU Can Jam,” set Monday, Nov. 19, in the James Union Building’s Tennessee Room, features three great bands for one low price: one can of nonperishable food per person.

All proceeds will benefit the MTSU Student Food Pantry and Second Harvest Food Bank. The event, organized by the Office of Student Programming and Activities, is open to the public.

Farewell Fighter, Candace Brown and Tell Romeo I Hate Him will perform beginning at 7 p.m. at the concert, which is co-sponsored by the Student Government Association and the Center for Student Involvement and Leadership.

Brown, a native Californian who relocated to Washington State as a middle schooler, started the Storybook Maneuver band with her younger sister, then moved on to a solo artist after graduating from high school and working with a local nonprofit group, Embracing Orphans in Jamaica, and leading music for a girls’ camp there. Her current EP is “Vivid.”

Tell Romeo I Hate Him’s members hail from various Southern cities, but the Nashville music scene has welcomed their pop-punk mix that incorporates their histories with violin, trumpet and saxophone along with the more standard guitar, bass and drums.

For more information about “MTSU Can Jam,” email concerts@mtsu.edu.