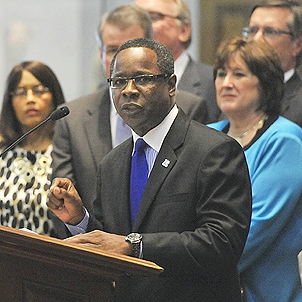 NASHVILLE–President Sidney A. McPhee and other top officials from MTSU received a standing ovation from lawmakers on Capitol Hill April 5 as the General Assembly read into the record a resolution commemorating the University on its centennial year.

The resolution described MTSU as the No. 1 choice in Tennessee for undergraduates, transfer students, veterans and students enrolling in summer classes. It also lauded MTSU for “generating $896 million in business revenue in the Nashville metropolitan area annually—$396 million in Rutherford County.”

State Rep. Joe Carr, an MTSU alumnus and prime sponsor of the resolution, told his colleagues in the House that MTSU is crucial to the state’s growing need for an educated populace and a workforce that will help bolster and strengthen Tennessee’s economy.

“Seventy-eight percent of the school’s alumni live in Tennessee, sixty percent within an hour’s drive of Rutherford County,” Carr said. “Simply put, MTSU is one of the state’s leading sources for college graduates, which is exactly what we need to compete in the 21st-century economy. In fact, it is the No. 1 provider of college graduates for the greater Nashville area.”

Carr then referenced the budget proposal now pending before the General Assembly to fund a much-needed new science building at MTSU—a project intended to better prepare students for the jobs of tomorrow.

“I think all of us understand why it is critical to our state’s future and success for Tennessee’s No. 1 undergraduate institution to offer a top-notch science education to its students,” Carr said.

Following an introduction by state Sen. Jim Tracy, McPhee thanked Carr and the Rutherford County delegation, as well as Rutherford County Mayor Ernest Burgess and Murfreesboro Mayor Tommy Bragg, for their service to the state and support of the University.

“For 100 years, this University has provided outstanding academic programs and services to the people of this state,” McPhee said. “We are in a position to do that because of the tremendous support from the members of this House and, in particular, our local delegation.”

The president then delivered brief remarks, stressing that in addition to MTSU’s strong local presence, the University has also made international outreach a priority in recent years.

McPhee specifically mentioned a recent outreach trip to Bangkok, Thailand, where he hosted an event that drew more than 200 MTSU alumni living in Thailand and hoping to reconnect with the University.

“We have reaped many rewards from these types of collaborations,” he said.

MTSU, founded on Sept. 11, 1911, as one of the state’s three normal schools, has celebrated its centennial throughout the 2011-12 academic year. The observances conclude with MTSU’s Spring Commencement on May 5.

Watch a video from the event below.