‘Symphony of Psalms,’ ‘Rhapsody in Blue,’ U.S. premiere, too 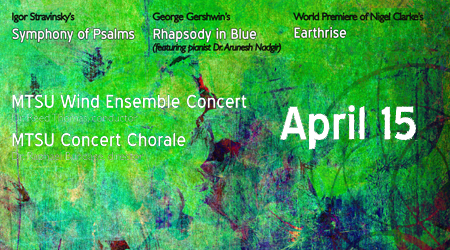 MTSU’s Wind Ensemble and Concert Chorale are teaming up with a host of special guest artists to present an astounding spring afternoon of music on April 15 in Hinton Music Hall in the University’s Wright Music Building.

Featuring Igor Stravinsky’s “Symphony of Psalms” and George Gershwin’s “Rhapsody in Blue,” the 3 p.m. event also will include the U.S. premiere performance of “Earthrise” by Nigel Clarke.

The entire performance is free and open to the public.

“Stravinsky’s ‘Symphony of Psalms’ is one of the most challenging and creative miracles of the 20th century,” said Dr. Raphael Bundage, director of MTSU Concert Chorale. “I am so very pleased to combine our Concert Chorale with our wonderful Wind Ensemble to perform this deeply devotional work.”

“Dr. Bundage and I have worked together on a choir and wind ensemble piece several years ago, and while discussing the ensemble calendar last year, we decided it was time to do it again,” added Dr. Reed Thomas, director of the MTSU Wind Ensemble. “We exchanged several ideas over the semester and summer, finally deciding on the Stravinsky ‘Symphony of Psalms.’”

Additional professionals will assist the renowned Wind Ensemble for the performance. MTSU faculty members joining in are oboist Laura Ann Ross, George Riordan on the English horn, cellist Christine Kim, double bassist Tim Pearson and bassoonist Gil Perel, who also plays with the Nashville Symphony. Other special guests include oboist Jared Hauser and bassoonist Laura Hauser, both from the Blair School of Music at Vanderbilt University, and contrabassoonist Pat Gunter, a freelance musician.

“People do not equate (‘Symphony of Psalms’) as a ‘wind-band piece’,” said Thomas, “but the instrumentation is winds, brass, percussion with cellos and double basses. There are extended double reeds employed in the orchestration requiring four oboes plus and English horn and three bassoons plus contrabassoon. There also are two pianos and a chorus.”

“Growing up, I always loved listening to ‘Rhapsody in Blue’, but I never had the opportunity to perform it,” said Nadgir. “It has been a real treat to work on it with the MTSU Wind Ensemble as they bring so much excitement and energy to the work. It’s such a joyous and uplifting piece!”

The Wind Ensemble will perform the U.S. premiere of Clarke’s “Earthrise,” a result of his previous work at MTSU as composer-in-residence.

“After hearing, working with and really enjoying our ensemble, he (Clarke) told me that he wanted to write a piece for us to premiere. This is the end product,” Thomas said, noting that the work is Clarke’s musical description of Apollo 8’s unscheduled photo of the earth as it “rose” from behind the moon.

The piece, written in one continuous movement, has three sections, each depicting a different part of the flight. “The differing moods of the piece are reflected and captured in a specially commissioned poem that is to accompany the piece, written by Martin Westlake,” Thomas added.

Clarke, an Englishman currently living in Belgium, began his musical career as a military bandsman in the Queen’s Army. He studied composition at the Royal Academy of Music, earning its highest awards, and has served on the faculty at Royal Academy of Music, the London College of Music and Media and the Royal Military School of Music. Besides writing for wind bands, he has written many works for British brass bands and is an active film composer working with the London Symphony Orchestra.

For more MTSU School of Music concert information, call 615-898-2493 or visit www.mtsumusic.com and click on the “Concert Calendar” link.