In the News: Car insurance, th..

Middle Tennessee State University recently kicked off its 2021-22 Employee Charitable Giving Campaign with a record goal of $140,000 during the monthlong effort that started Oct. 1.

In a kickoff video announcing the new goal, MTSU President Sidney A. McPhee again thanked faculty and staff for consistently stepping forward to share their resources with area nonprofit agencies to help those less fortunate throughout the community. 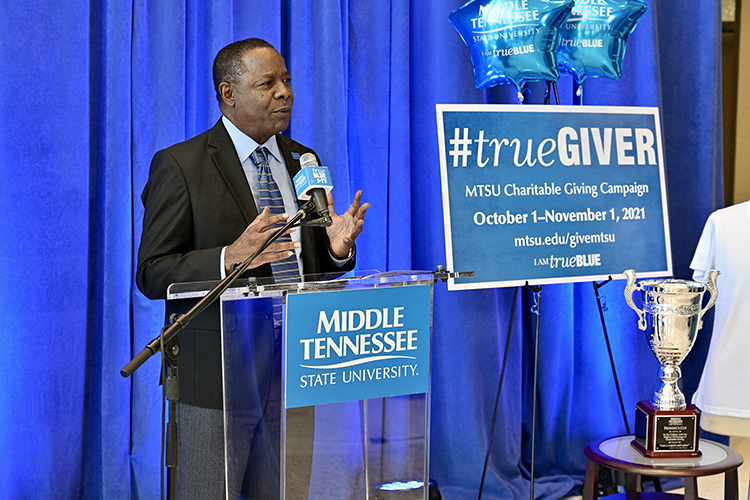 MTSU President Sidney A. McPhee announces a $140,000 goal for the 2021-22 MTSU Employee Charitable Giving Campaign during the Sept. 27 kickoff ceremony held in the atrium of the Cope Administration Building. (MTSU photo by Andy Heidt)

“These days have brought such unprecedented challenges to many of our neighbors and friends. Our sustained generosity that we express each year to help others through this campaign fills my heart with a great sense of pride,” said McPhee, who expressed confidence that this year’s goal will be met and even exceeded.

“As we continue to endure this global pandemic, the generosity of our true GIVERS provides a needed boost to those most affected by its disruptive impact. And, in doing so, we demonstrate our commitment to the True Blue Pledge, which calls upon us all to be engaged in the life of our community.”

MTSU’s annual Charitable Giving Campaign is led by a committee of faculty and staff volunteers to rally financial support for worthy causes. The campaign is fueled largely by monthly payroll deductions from employees over the next year, but also allows one-time, lump-sum gifts at the donor’s discretion.

Participants can designate gifts to 140-plus organizations from a list of 10 independent charities and three federated groups of charities, including Community Health Charities, Community Shares, and local United Way organizations.

Throughout the month participants’ names will be entered into weekly drawings for a variety of “True Blue” swag and reserved parking spaces. All employees are eligible for the drawings, even those who choose not to give, as long as they register at the campaign website maintained by the Information Technology Division.

“Mr. MTSU” John Hood, director of Governmental and Community Affairs, will be featured in a weekly video distributed to campus each Friday announcing the winners. 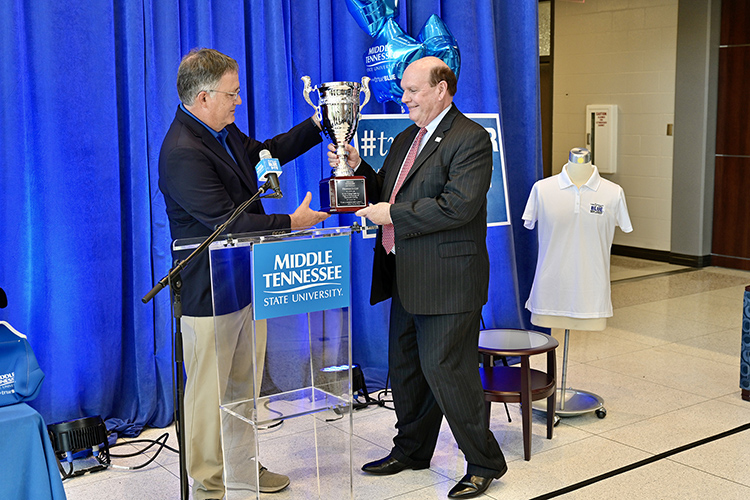 MTSU Provost Mark Byrnes, left, accepts the Provost Cup from Jones College of Business Dean David Urban during the kickoff of the 2021-22 MTSU Employee Charitable Giving Campaign held recently in the atrium of the Cope Administration Building. The Provost Cup is a friendly competition between academic units that is awarded to the college with the highest percentage of employee participation. The Jones College of Business has won the cup for eight straight years. (MTSU photo by Andy Heidt)

Provost Mark Byrnes echoed McPhee’s sentiments about the latest campaign, saying that “we get a chance to give back to the community. We think of MTSU as a community, and it is, but we sit within a broader community filled with people who have needs. This is our chance to do something for them.”

Byrnes again praised Dean David Urban of the Jones College of Business for its impressive eight-year streak of winning the Provost Cup, a friendly competition between academic units that is awarded to the college with the highest percentage of employee participation. 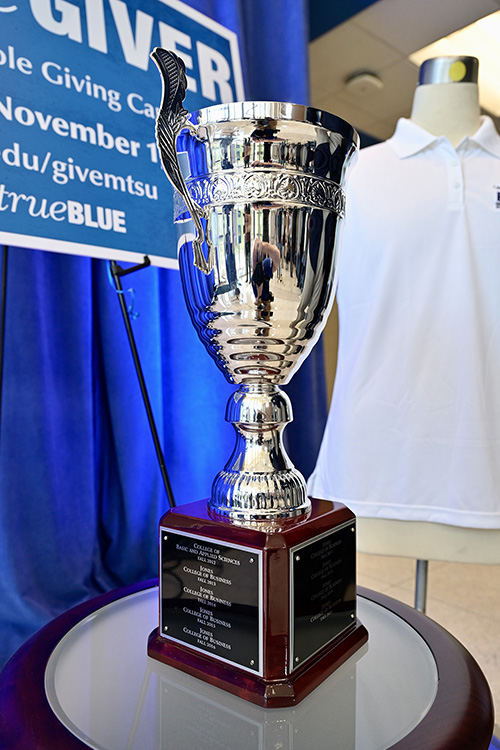 The Provost Cup, shown here, involves a friendly competition between academic units that is awarded to the college with the highest percentage of employee participation. The Jones College of Business has won the cup for eight straight years. (MTSU photo by Andy Heidt)

As is tradition, Urban returned the cup to Byrnes at the kickoff for safekeeping until this year’s winner is announced. “But with each new campaign comes a new opportunity for the other colleges to claim the Provost’s Cup,” Byrnes said.

Urban cheerfully threw down a challenge to his colleagues across campus to snatch the Provost Cup from his college and end its streak, but reiterated that the most important thing is just to give.

“One of the things that makes me most proud of being a part of this family is how generous people are,” Urban said, “and how they step up to the plate time and time and time again to help people in need.”

Campaign Committee spokesperson Andrew Oppmann, vice president of marketing and communications, reminded those who wish to pledge to go to https://mtsu.edu/givemtsu/ and follow the instructions on how to give “a hand up” to those in need.

For more information about the campaign, contact Mary Purdom in the Division of Marketing and Communicationsat Mary.Purdom@mtsu.edu. 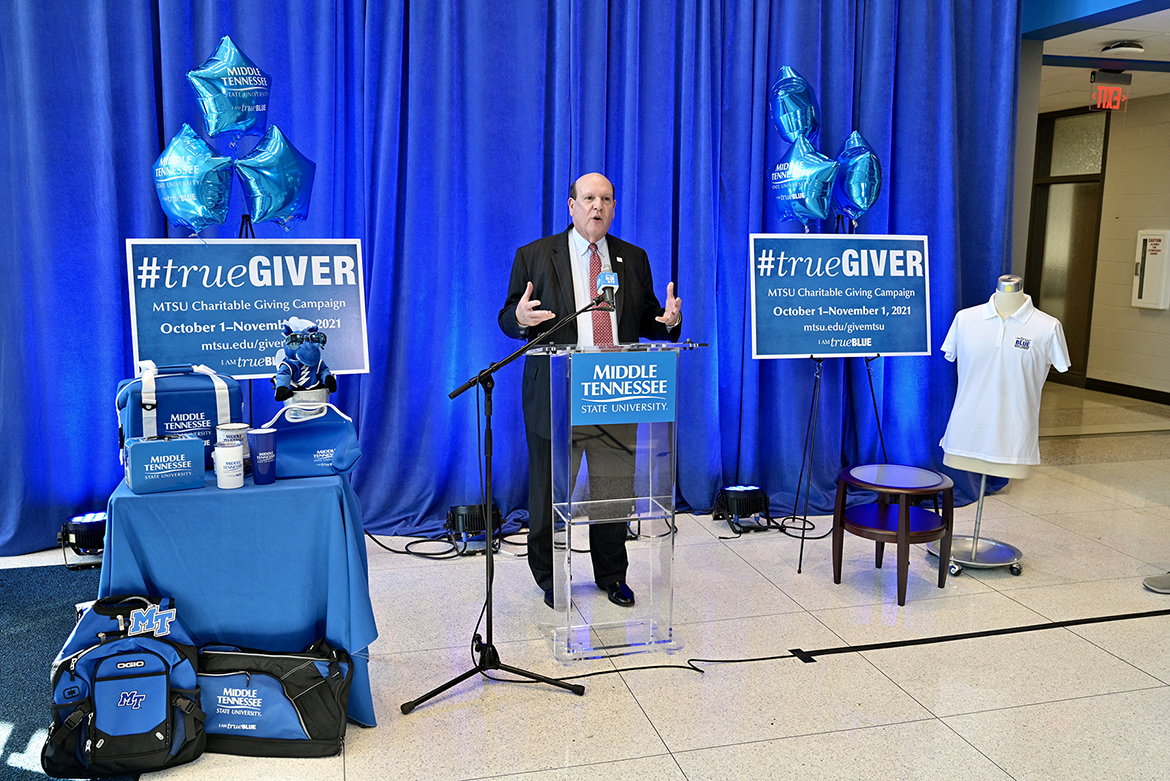 Dean David Urban of the Jennings A. Jones College of Business encourages colleagues to contribute during the kickoff of the 2021-22 MTSU Employee Charitable Giving Campaign held recently in the atrium of the Cope Administration Building. At left are giveaways of MTSU-branded and True Blue apparel and gear that will awarded during weekly drawings throughout the campaign. (MTSU photo by Andy Heidt) 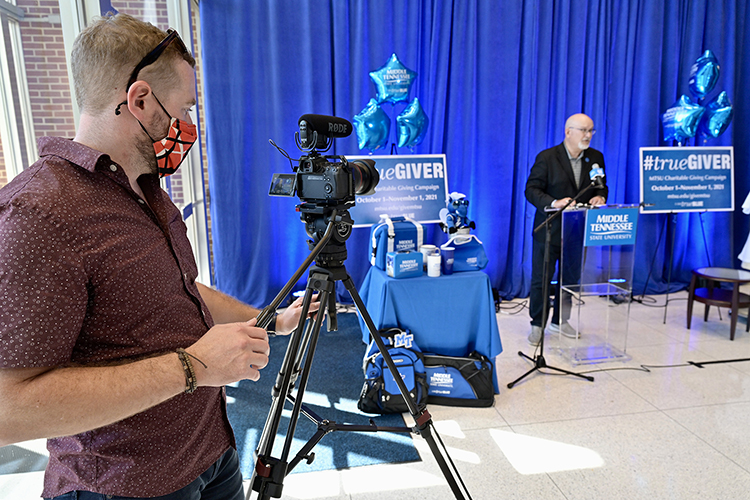 Andrew Oppmann, vice president of marketing and communications and spokesperson for the 2021-22 MTSU Employee Charitable Giving Campaign, gives remarks during the recent campaign kickoff in the atrium of the Cope Administration Building as other campaign volunteers look on. Filming the event, at left, is John Goodwin, strategic communications manager in the Division of Marketing and Communications. (MTSU photo by Andy Heidt)